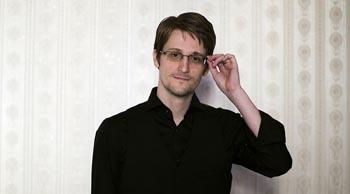 Activists and journalists on Twitter pressed lawmakers to set aside partisan politics for the sake of the NSA whistleblower and the fight against digital mass surveillance.

Democrats were urged this weekend to publicly demand a pardon for Edward Snowden after President Donald Trump said Saturday he was considering that action for the National Security Agency whistleblower.

“I’m not that aware of the Snowden situation. But I’m going to start looking at it,” Trump said at a press conference at his Bedminster, New Jersey, golf club when asked if he would pardon Snowden, who’s been living in exile in Russia since 2013.

“It seems to be a split decision,” the president said, adding that “many people… think that he should be somehow treated differently and other people think he did very bad things. And I’m going to take a very good look at it.”

The remarks came days after Trump said in an interview published Thursday by The New York Post that he is open to pardoning Snowden — a comment widely welcomed by whistleblower advocates. Among that chorus was Freedom of the Press Foundation, for which Snowden serves as board president — with that group responding, “No matter your feelings on Trump, a Snowden pardon would be a major win for those who care about fighting back against mass surveillance in the digital age.”

The ACLU also restated its support for the whistleblower in the wake of latest comments from Trump, noting in a late Saturday tweet that “Snowden blew the whistle on illegal government activity kept secret for years, sparking a global debate about the proper limits of government surveillance.”

“We’ve said it before and we’ll say it again,” the group added. “Snowden is a patriot and should be pardoned.”

But instead, they will probably try to attack Trump from the right and say he is “pardoning a traitor for Putin” or whatever which will anger a large part of their base who know better and make another part less able to engage in critical thinking.

Greer added in tweets later Saturday an accusation that Trump is “a self-serving bag of farts who is only going to ‘take a look’ at this to score political points” and said Democrats risk being “fucking idiots if they let Trump take this as a win instead of just finally admitting Snowden was right.”

One high-profile Democrat who rejected Trump’s floating a pardon for Snowden is Susan Rice, national security adviser under the Obama administration.

Rice’s response on Twitter — “I. Just. Can’t. Congratulations GOP. This is who you are now.” — were seized upon by surveillance state critics including Glenn Greenwald, who was among the team of journalists that first reported on the Snowden revelations.

National Security apparatchiks like @AmbassadorRice (no longer an Ambassador) have wanted Snowden in prison for years because he exposed how they secretly and illegally converted the internet into their spying playground.

As for her claim that pardoning Snowden is a GOP view: https://t.co/NpQ11xwttX pic.twitter.com/LjePsz1T2Y

I really don’t understand this way of thinking. After four years in which so many democratic institutions have been gutted or repurposed for abuse and cruelty, *this* is what gets you—the possibility that Trump might pardon a whistleblower? https://t.co/woSj5n9qZV

The tweet from Rice also came in for criticism from Mehdi Hasan, a journalist at The Intercept.

“Your former colleague, ex-Attorney General Eric Holder, said Edward Snowden performed a ‘public service,’” Hasan responded to Rice. “And everyone from Human Rights Watch and Amnesty to the New York Times and Guardian editorial boards have called for some form of clemency or pardon for Snowden.”