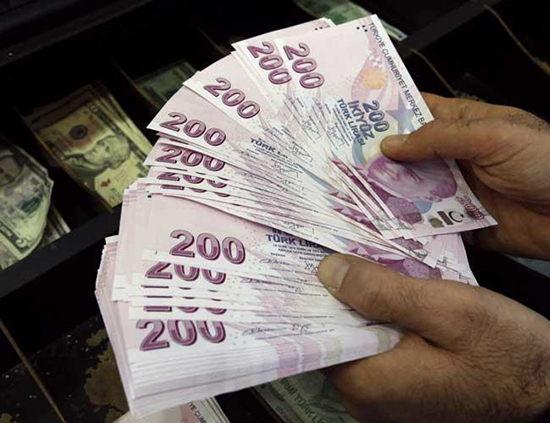 Turkey‘s economy contracted 9.9 percent year-on-year in the second quarter of this year, the country’s statistical authority announced on Aug. 31.

During the second quarter of the year, several economies – including Turkey – faced economic difficulties due to the measures to stem the COVID-19 pandemic, such as lockdowns and travel restrictions.

TÜİK said, the value-added increased 4% in the agricultural sector year-on-year in the second quarter.

The services – wholesale and retail trade, transport, storage, accommodation and food service activities – and industry sectors’ value-added went down 25% and 16.5% on a yearly basis.

Government final consumption expenditure dropped by 0.8 while gross fixed capital formation fell 6.1% in the second quarter of 2020 compared with the same quarter of the previous year.

“Compensation of employees increased by 0.5% and net operating surplus/mixed-income are decreased by 2.4% in the second quarter of 2020 compared with the same quarter of the previous year, respectively,” the institute noted.

A group of 17 economists surveyed by Anadolu Agency on Thursday had projected the Turkish economy to narrow 11% on an annual basis in the second quarter of this year.

Economists’ forecasts hovered between minus 7% and minus 15%. The economists also predicted that Turkey’s annual GDP in 2020 would contract 1.8% on average.

Before the onset of the novel coronavirus crisis, the economy was expected to grow 5% in 2020 as laid out in the country’s new economic program announced last September.

During the pandemic period, almost all countries’ GDP posted decreases, such as GDP has narrowed by 10.9% in the Organization for Economic Cooperation and Development (OECD) area in the second quarter of 2020 on an annual basis.

Berat Albayrak, Turkish treasury and finance minister, tweeted: “We knew that we would feel the effects of the catastrophic pandemic of the century that brought the world economies to a halt in the second quarter.”

“Stressing national economic targets and employment-based production, he said: “I hope we will end the year positively with an economy model that supports its citizens.”

Turkey is determined to enter 2021 by erasing the traces of the pandemic and the country will see a “V” shaped recovery in the GDP data, the minister noted.