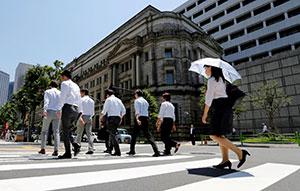 In an online briefing on Wednesday, Wakatabe said there were many lessons to learn from the U.S. Federal Reserve’s new policy strategy that focuses more on creating jobs and boosting household income.

“Personally, I feel there is room to consider the idea, voiced by some people, that monetary policy should focus more on job and income conditions,” he said.

“The BOJ doesn’t need to directly set them as targets. But it can take job and income conditions more into account in debating policy.”

The BOJ is mandated by law to achieve price and financial system stability, but does not have a target on jobs growth.

A few academics have called on the BOJ to target jobs or nominal gross domestic product (GDP) to strengthen its commitment to maintain ultra-easy policy longer.

Wakatabe said overseas examples will be “very useful” for the BOJ in enhancing its policy framework as many nations face the same damaging effect on jobs and consumption from COVID-19.

He declined to comment on Japan’s political situation but said the BOJ’s current monetary policy was “most appropriate” for now, regardless of who becomes the new prime minister.

Japan is facing a leadership race this month after Prime Minister Shinzo Abe’s decision to step down. Yoshihide Suga, the government’s top spokesman, is emerging as the front-runner to succeed Abe, heightening expectations that many of the premier’s stimulus policies will be maintained.

Wakatabe said the BOJ must focus on avoiding deflation, and warned that temporary external shocks, such as the current pandemic, could lead to persistent stagnation.

“In order to address both upside and downside risks to prices, the BOJ must continue to strongly commit itself to achieving its (2%) price target,” he said.

Analysts expect Japan’s core consumer prices, which were flat in July from a year earlier, to slide in coming months due to soft demand, reviving fears of a return to deflation.