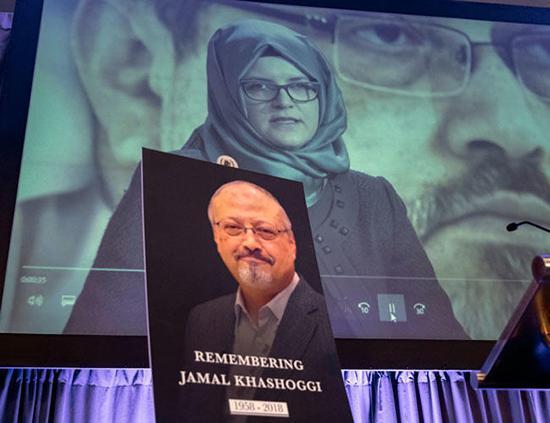 A United Nations expert has rejected as “parody of justice” a Saudi court ruling that overturned the death sentence of convicts involved in the gruesome killing of dissident journalist Jamal Khashoggi in 2018.

A court in Saudi Arabia commuted in a final ruling on Monday the death sentence handed to the five people, with the official Saudi Press Agency saying five defendants had received 20-year sentences and three others had been sentenced to between seven to 10 years.

“The Saudi Prosecutor performed one more act today in this parody of justice. But these verdicts carry no legal or moral legitimacy,” Agnes Callamard, the UN special rapporteur on extrajudicial, summary or arbitrary executions, said in a tweet later in the day.

#JamalKhashoggi: 1.The Saudi Prosecutor performed one more act today in this parody of justice. But these verdicts carry no legal or moral legitimacy. They came at the end of a process which was neither fair, nor just, or transparent. https://t.co/nt4n2CqS21

Callamard also denounced in a series of tweets the fact that “the high-level officials who organized and embraced the execution of Jamal Khashoggi have walked free from the start.”

The UN official underlined that Saudi Crown Prince Mohammed bin Salman “has remained well protected against any kind of meaningful scrutiny in his country.”

At an earlier stage of the trial in December, the court sentenced five people to death and three to jail, claiming that the killing was not premeditated but carried out “at the spur of the moment.”

Hatice Cengiz, the fiancee of the slain Saudi dissident, also censured on Monday as a “farce” the court ruling that overturned the death sentences.

“The ruling handed down today in Saudi Arabia again makes a complete mockery of justice,” Cengiz said in a statement posted on Twitter. “The international community will not accept this farce.”

This is my statement in response to the ruling today. #Khashoggi pic.twitter.com/rPxzWhetb1

The Saudi court did not reveal the identity of the eight convicts involved in the case.

“The Saudi authorities are closing the case without the world knowing the truth of who is responsible for Jamal’s murder,” Cengiz added. “Who planned it, who ordered it, where is the body? These are the most important questions that remain totally unanswered.”

Khashoggi’s sons, under alleged pressure from Riyadh, announced in May they had “pardoned” the killers of their father, a move dismissed at the time as “the antithesis of justice” by a UN expert, who concluded that Khashoggi was “the victim of a deliberate, premeditated execution” for which the Saudi kingdom was responsible.

Khashoggi, a former advocate of the Saudi royal court who later became a critic of bin Salman, was killed in the Saudi consulate in Istanbul on October 2, 2018, after he entered the perimeter to collect documents for his planned wedding. He had been falsely promised the documents.

The Washington Post, for which Khashoggi was a columnist, reported in November 2018 that the CIA had concluded that bin Salman personally ordered his killing.

Khashoggi’s killing damaged the ties between Ankara and Riyadh, and tarnished the prince’s international image.

Ankara has called Khashoggi’s killing “premeditated murder,” and has pressed the kingdom for information on his dismembered body’s whereabouts.

Riyadh, which initially claimed Khashoggi left the consulate on the day, later admitted that he was killed, blaming the murder on a “rogue” group and putting 11 unnamed individuals on trial.

The Saudi crown prince accepted responsibility a year after the murder and said, “It happened under my watch.”