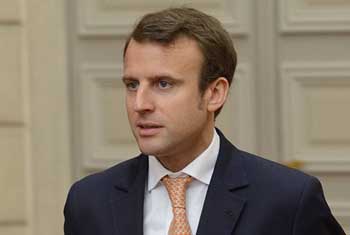 French President Emmanuel Macron is meeting with leaders from six Mediterranean EU countries on Thursday for talks focused on growing tensions between Turkey, Greece and Cyprus.

The summit on the French island of Corsica is bringing together the leaders of France, Italy, Malta, Portugal, Spain, Greece and Cyprus. It was set to begin at around 3 p.m. central European time, according to Agence France Presse.

The aim of the talks is to “make progress in the consensus on the relationship of the (European Union) with Turkey above all ahead of the 24-25 September EU summit”, AFP cited a French presidential official as saying.

The EU’s foreign affairs chief Josep Borrell said on Aug. 28 that the bloc was preparing sanctions against Turkey that could be discussed at EU summit.

France has strongly backed Greece and Cyprus in a growing standoff with Turkey over territorial claims and a military buildup in the eastern Mediterranean that has sparked fears of conflict.

The Greek media has said Greece may purchase Rafale fighter jets and at least one frigate from France, in a sign of an increasingly strong alliance between Paris and Athens.

Turkey still has time to avoid sanctions and “take a step back” from its activities in the sub-region, Mitsotakis said in an op-ed published in The Times on Wednesday.

“We do need dialogue, but not when held at gunpoint. What threatens my country’s security and stability threatens the well-being and safety of all EU member states,” he said. “If Europe wants to exercise true geopolitical power, it simply cannot afford to appease a belligerent Turkey.”

On Wednesday, Turkish Defence Minister Hulusi Akar told his German counterpart Annegret Kramp-Karrenbauer that other countries involved in the eastern Mediterranean dispute should approach the issue with “common sense and spirit of the alliance”, state-run Anadolu news agency reported, citing an official statement.

Turkey says it is ready for talks with Greece and accuses Athens of failing to come to the negotiating table.

Political and military tensions between Turkey and Greece have intensified after Ankara sent the Oruç Reis research vessel escorted by Turkish warships to a disputed area between Cyprus and the Greek island of Crete on Aug. 10. Athens responded to the move by sending naval and air units to shadow the vessel and conducted military exercises with Cyprus and France in the area, creating a standoff at risk of escalating into a direct confrontation.

Turkey is righteous and resolute, will never allow any fait accompli, and will continue to defend its rights based international law, Akar said.

During a visit to Ankara this week, NATO Military Committee Chairman Stuart Peach said Turkey was a valuable ally for the military alliance, of which Greece is also a member.

“Turkey makes essential contributions to NATO operations and activities. NATO is working to strengthen further our collective deterrence and defence, and to project stability beyond our borders, and Turkey is playing a key role in both,” Peach said, according to NATO’s official website.

NATO Secretary-General Jens Stoltenberg said on Sept. 3 that Turkey and Greece had agreed to begin technical talks at NATO to resolve tensions in the region, a statement Athens later denied.

Stoltenberg gave the countries a deadline, which expires on Thursday, to respond to his proposals for talks on de-escalating tensions, Greek newspaper Kathimerini reported on Wednesday.