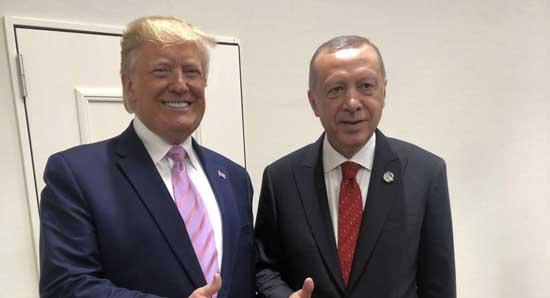 The presidential election in the United States is now in full swing and nations around the world are paying close attention. U.S. President Donald Trump is considered vulnerable, owing to his administration’s handling of the COVID-19 pandemic and race riots through the summer and his defeat may cause as much of a flip in U.S foreign policy as when he was elected.

His Democratic opponent, former Vice President Joe Biden, is a familiar face on the international stage from his decades in the U.S. Senate and during his tenure as President Obama’s point person on difficult problems abroad.

One country paying close attention to the outcome of this year’s election is Turkey and its President Recep Tayyip Erdoğan. Over the last four years, Erdoğan has built a strong relationship with President Trump despite the ire directed at the Turkish head of state from other elements of the executive branch and the U.S. Congress.

However, the results of November’s election remain unpredictable and the chance of U.S.-Turkish relations experiencing a dramatic shift remain high.

“Erdoğan, to his credit, has shown a remarkable ability to be a “president whisperer” with the White House,” Michael Rubin, a resident scholar at the American Enterprise Institute in Washington, told Ahval in a podcast.

Rubin highlighted this by pointing to Erdoğan’s relations with each American president whose administration has coincided with his own almost-two-decade tenure as Turkey’s leader.

“He had decent relations with George W. Bush, he had fantastic relations with Barack Obama until 2013 … and of course Trump has a really good relationship with Erdoğan,” Rubin said.

For Erdoğan, having a close personal relationship with his American counterpart is increasingly important. The Turkish president’s reputation with Congress has cratered as a result of multiple attacks on the Syrian Kurds supporting U.S. forces against the Islamic State (ISIS) militant group, his undermining of U.S. sanctions against Russia and Iran, and his acrimonious relations with other key American allies, like Israel and France.

Turkey’s lobbying and cultivation of the Trump administration has been well documented. Since Trump’s election, Turkish-connected companies and organisations have spent significantly at properties connected to Trump-owned businesses around Washington. Turkey has also been connected to important characters in Trump’s orbit, including former National Security Adviser Michael Flynn and Trump’s personal lawyer Rudolph Giuliani.

Flynn registered as a foreign lobbyist for Turkey retroactively after penning an op-ed in The Hill that advocated against Erdoğan’s nemesis, Islamist preacher Fethullah Gülen, who resides in Pennsylvania. The retired general was also indicted for conspiring to abduct Gülen and return him to Turkey.

Giuliani served as a lawyer for Reza Zarrab, a Turkish-Iranian businessman convicted of violating U.S. sanctions against Iran in a scheme that ran through Turkey’s state-owned Halkbank. The former New York City mayor also reportedly urged Trump to extradite Gülen and defund schools tied to him that operate in the United States.

Biden’s camp also has ties to organisations connected to Turkey. Elvir Klempic, who previously worked as executive director at the Turkish Heritage Organization (THO), now serves as National Affinity and Ethnic Engagement Director.

THO officials were revealed to be coordinating U.S. lobbying efforts with Berat Albayrak, Erdoğan’s son-in-law and Turkey’s Finance Minister. FBI agents reportedly interviewed these officials about their activities.

Regardless of who wins the White House, there remains the risk Erdoğan may continue to mischaracterise Washington’s political scene.

“The [Turkish] embassy has not been able to accurately report what is going on in Washington,” AEI’s Rubin told Ahval. He attributes this inability to its self-imposed restrictions on contacts with any voice deemed critical of Erdoğan or his party in the American capital. This has given way to multiple occasions of misjudging U.S. politics or policies to the detriment of Ankara.

“The fact of the matter is Erdoğan has never accurately gauged U.S. policy,” he said.