The US will block some exports from China’s Xinjiang region, over alleged human rights abuses against the mostly Muslim Uighur minority.

It says “forced labour” was used to make the products, including at a “vocational” centre it called a “concentration camp”.

The export ban includes garments, cotton, computer parts and hair products from five entities in Xinjiang as well as nearby Anhui province.

It stops short of a wider regional ban.

“This is modern-day slavery.”

The move is the latest by the Trump administration to put pressure on China over the situation in Xinjiang.

Beijing is believed to have detained more than one million people from Xinjiang in recent years, citing security risks.

China maintains the internment sites provide job training and education and are necessary to combat terrorist and separatist threats.

Thousands of children have been separated from their parents and, recent research shows, women have been forcibly subjected to methods of birth control.

The orders on Monday “send a clear message to the international community that we will not tolerate the illicit, inhumane, and exploitative practices of forced labour in US supply chains,” Mark A. Morgan, acting commissioner of US Customers and Border Protection agency, said.

“Forced labour is an atrocious human rights abuse that is completely against the values that we all share.”

“The Trump administration will not stand idly by and allow foreign companies to subject vulnerable workers to forced labour while harming American businesses that respect human rights and the rule of law,” Mr Morgan said.

The orders announced on Monday target four companies and one manufacturing site.

They fall short of the region-wide ban that it had considered. Officials said, however, they were still exploring that possibility.

“Because of its unique nature, being, applying to a region as opposed to a company or a facility, we are giving that more legal analysis,” Mr Cuccinelli explained.

“We want to make sure that once we proceed that it will stick, so to speak.”

China produces about 20% of the world’s cotton with most of it coming from Xinjiang. The region is also a major source of petrochemicals and other goods that feed into Chinese factories.

This month, US entertainment giant Disney came under fire for shooting parts of its new Mulan film in Xinjiang.

Other firms have faced calls for consumer boycotts due to alleged ties to the region. 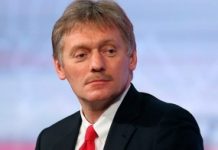