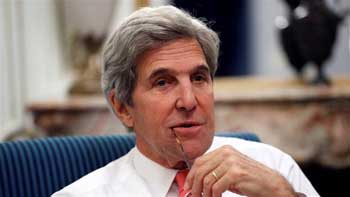 Kerry said in 2016 that “there will be no advanced and separate peace with the Arab world without the Palestinian process and Palestinian peace. Everybody needs to understand that.”

As Israel, the United Arab Emirates and Bahrain waltzed toward an agreement this week, many were surprised by the lack of Israeli “concessions” and a Palestinian state coming alongside the agreement. For two-and-a-half decades the paradigm that was pushed by experts on the peace process was that Israel would have to withdraw and give “concessions” in order to achieve normalization.

The belief in this manifesto became so strong that some of those involved in the peace process quietly urged Arab states not to make peace unless Israel made concessions, having become invested in the need to be right about the conflict.

The embodiment of these theories is former US presidential candidate and former Secretary of State John Kerry. A series of videos of the former diplomat constantly warning of violence if the US embassy was moved to Jerusalem and arguing that Israel could never have peace with its neighbors without a Palestinian state have emerged.

It should be remembered that Kerry gave a long speech at the end of the Obama administration’s 2016 term essentially indicating that this must be US policy. Kerry said in 2016 that “there will be no advanced and separate peace with the Arab world without the Palestinian process and Palestinian peace. Everybody needs to understand that. That is the hard reality.”

In a sense this created a framework in which western governments, including the US, might even oppose normalization of relations with Arab states unless a Palestinian state emerged with Jerusalem as its capital. This put the ball entirely in the Palestinians’ court to say no to Israel. With the Palestinians divided between the Ramallah-based Palestinian Authority and Gaza-based Hamas, the “no peace without concessions” paradigm ensured that Israel could never have relations with any new countries in the Middle East.

This sought to force Israel to invest in Palestinian unity talks and get Israel to withdraw some 500,000 people from east Jerusalem and the West Bank, an impossibility. Israel’s own leadership felt no buy-in to continue negotiations with the Palestinians and moved forward with quiet relations with the Gulf based on shared concerns over Iran’s aggression and Turkey’s policies.

Why was this framework so entrenched? Most other countries have relations with each other regardless of ongoing conflicts, such as disputes over Kashmir or the Western Sahara or Crimea. John Kerry’s speech at the 13th annual Saban Forum at the Willard Hotel in December 2016 included the claim that “I’ve heard several prominent politicians in Israel sometimes saying, well, the Arab world is in a different place now, we just have to reach out to them, and we can work some things with the Arab world, and we’ll deal with the Palestinians. No, no, no and no.”

In a sense Kerry’s innovation here was to add a fourth “no” to the infamous three “nos” of the Arab League summit in Khartoum in 1967: No peace with Israel, no recognition of Israel, no negotiations with Israel. Why were Kerry and others so invested in making sure that there wouldn’t be any separate discussions except through Ramallah?

Because, having bought into this paradigm and pushed it, then any separate peace would undermine US policy. In a very bizarre way some Western powers became a potential impediment to peace between Israel and many Arab states. Why were their calculations wrong?

Wendy Sherman, under secretary of state for Political Affairs between 2011 and 2015, tweeted on September 15 that while she was glad for the agreements between Israel and the UAE and Bahrain, neither US President Donald Trump or Israeli Prime Minister Benjamin Netanyahu “mentioned the Palestinians.”

Martin Indyk, a former ambassador to Israel and Special Envoy for Israeli-Palestinian Negotiations, wrote that while he was happy for the Israelis “today who will finally receive Arab regional recognition” he was sad for the Palestinians. “Will anyone on the podium today acknowledge their legitimate aspirations for freedom and statehood.”

The desire to link Palestinian statehood to greater peace deals seemed inviting in the 1990s. It was a product of the end of the Cold War and US hegemony. The US felt that this linkage would be good for everyone involved because the Arab states could be enticed to make peace with Israel through promises that their 40-year support of the Palestinians would bear fruit. In a sense this would save them humiliation from having climbed down from the “three nos” of Khartoum. It was a way out of the impasse of their intransigence. It was an unprecedented isolation Israel had been subjected to. No other country in the world was treated so shabbily.

It was the Second Intifada that reversed the situation. The peace initiative put forward by Saudi Arabia in 2002 locked in the need for Israeli withdrawal and a Palestinian state in exchange for peace across the region. Now the framework has moved a bit, but western states engaged in the Quartet and also the “road map” and other processes were unable to make progress toward an actual deal.

As time progressed it became clear that the lack of Palestinian unity was an impediment to the deal. With Iran and Turkey invested in supporting Hamas, and the Gulf crisis developing in 2017 that divided Qatar from the rest of the Gulf, a new setup began to look with favor on relations with Israel. This was because it now became clear that Palestinian roadblock to normalization with the Gulf states made no sense. Why should something as basic as diplomatic relations be hostage to an endless unsolvable dispute. There are other disputes, in the Caucuses and elsewhere, but no one breaks relations with Turkey due to Northern Cyprus or with Russia due to the Donbass conflict. Why should Israel remain isolated and thus give Iran an incentive to fuel conflict in Gaza and give Turkey an incentive to stir up problems in Jerusalem.

Herein lies the reason the framework and Kerry’s “four nos” were dismantled. The Gulf states needed buy-in from Washington and support for their moves. Once they had the support they needed, they felt secure enough to confront accusations of “betraying” the Palestinians.

The argument was quietly made that it was the Palestinians who had betrayed the support they received for 70 years. After all, the Palestinians received support for a long time, but little came of it. Whether that was Israel’s fault or Hamas’s or Mahmoud Abbas’s, or simply the nature of the impossible paradigm the conflict was constructed under, was now less important than countries pursuing self-interest.

The Israel-Palestinian conflict now looks to be one more complicated disputes that resulted from the Cold War, and cannot be easily solved because of colonial-era borders, international law and the policies of all the stakeholders. However, a lack of a “solution” has now been accepted by some countries. This is a challenge for the western paradigm that wants “solutions” to everything, despite western colonialism have largely helped create the problems like Kashmir that then need “solving.”

This has given western countries an excuse to involve themselves in places throughout the world, but with the erosion of the US “new world order” and decline in the rules-based liberal world order, many countries are taking a gamble on new frameworks. In essence that appears to be what happened this week as the UAE and Bahrain moved towards working with Israel, asserting that lack of progress on the Palestinian issue shouldn’t forever keep them from pursuing their interests in the wider region.