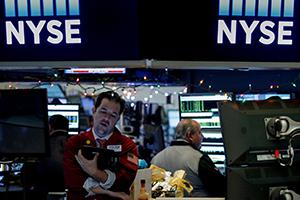 The brighter mood was seen extending to Europe, with eurostoxx 50 futures and Germany’s DAX futures jumping 1.7% each at the open, while London’s FTSE futures climbed 1.3%.

MSCI’s broadest index of Asia-Pacific shares outside Japan advanced 0.7% to 551.48, but stayed within striking distance of a two-month low of 543.66 hit last week.

The index is set to end the month deep in the red after three straight monthly gains as the coronavirus pandemic continues to wreak economic havoc around the world and raises investor anxiety about sky-high valuations.

Traders also remain cautious ahead of a U.S. Presidential debate on Tuesday and on fears a spike in new coronavirus cases in Europe could dent the global economic recovery.

On the day, Chinese shares opened higher and helped to underpin Asian markets after a tentative start. The blue-chip CSI 300 index was last up 0.3%, paring some of the early gains.

Sentiment in Asia was supported by weekend data that showed profits at China’s industrial firms grew for the fourth straight month in August buoyed in part by a rebound in commodities prices and equipment manufacturing.

Economic indicators in August, ranging from exports to producer prices and factory output, have all pointed to a further pickup in the industrial sector thanks to a slew of measures to kick-start the world’s second-biggest economy. That has in turn has lent support to the global recovery, though the spike in worldwide COVID-19 cases has raised fresh risks.

The broad gains in Asia follow a Wall Street rally on Friday though analysts expect the gains to be short-lived as expectations for economic growth start to falter.

Particularly worrying is a resurgence of COVID-19 cases in Europe, dousing earlier hopes that authorities might have started to exert some control on the outbreak and raising further strains on businesses already grappling with losses.

“Clouds have started to gather over the developed world as political uncertainty increases in the U.S. and Europe grapples with a resurgence in COVID-19 cases,” Kerry Craig, Global Market Strategist, J.P. Morgan Asset Management.

COVID-19 cases are edging closer to 33 million around the globe with 992,470 reportedly dead with Europe seeing a surge in new infections.

“While governments are loathe to re-introduce nationwide lockdowns, localised and sector based restrictions may last for some time, restraining economic activity,” Craig added.

Investor focus will next be on the first debate between U.S. President Donald Trump and rival Joe Biden on Tuesday ahead of the November election.

A strong performance in Tuesday’s debate by Biden, who currently has a modest lead in betting odds and polls, might boost stocks related to global trade and renewable energy, while a perceived victory by Trump could benefit fossil fuel and defense companies.

Market focus will also be on progress on a new fiscal support package in the United States while investors will be closely watching UK-Europe post-Brexit trade talks as they continue this week.

In currencies, the dollar slipped from a near a two-week high against the Japanese yen to 105.32.

The risk sensitive Australian dollar was slightly firmer at $0.7052 after falling for six consecutive sessions as odds narrowed over the prospect of further monetary policy easing in the country.

In commodities, oil prices came under pressure as renewed mobility curbs in various countries to contain a resurgence of coronavirus cases cloud the outlook on fuel demand recovery.