Turkey on Oct. 4 condemned Armenian attacks on the city of Ganja on and repeated it backs Azerbaijan‘s right to self-defense within its internationally-recognized borders.

“These attacks are an indication of the desperation Armenia has fallen into and that it will not refrain from committing crimes against humanity with aims to continue its illegal occupation,” the Turkish Foreign Ministry said in a statement.

The statement further stressed that targeting civilians in Ganja is “a new manifestation of Armenia’s unlawful attitude”.

Underscoring that Armenia has violated all principles of humanitarian law, primarily the Geneva Conventions, the ministry said Armenia is attacking civilian settlements beyond the conflict zones that it occupies.

“Armenia is the biggest obstacle to peace and stability in the region,” the ministry said.

Nobody against ceasefire in Nagorno-Karabakh, if sustainable conditions ensured: Presidential spokesperson 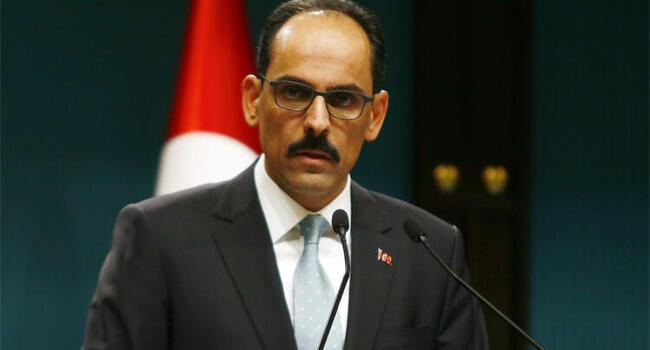 Azerbaijan said on Oct. 4 that Armenian armed forces have shelled its second-largest city Ganja, escalating the conflict which flared up last week.

Azerbaijan’s Foreign Ministry said that one civilian had been killed and four wounded in an Armenian rocket attack on Ganja.

Earlier in a statement, Azerbaijan’s Defense Ministry said Armenian armed forces are firing rockets in the Fizuli region from Armenia, and heavy artillery in Aghdam and Terter regions from “occupied territories.”

“The enemy shelled Ganja city from Armenia,” it said.

Separately, Hikmet Hajiyev, an assistant to Azerbaijan’s president, on Twitter said “indiscriminate missile attacks are launched against Ganja, Füzuli, Tartar and Jabrayil cities of Azerbaijan from territory of Armenia.”

“Ganja is the second biggest city of Azerbaijan. 500.000
population,” he added.

Border clashes broke out a week ago when Armenian forces targeted Azerbaijani civilian settlements and military positions, leading to casualties.

Casualties from the past week’s fighting have run into the hundreds, although precise figures are impossible to obtain.

Armenia said the Karabakh cities of Stepanakert and Martakert were under attack by Azerbaijan’s air force and from long-range missiles.

Each side accused the other of targeting civilians.

Ignoring appeals from Russia, the United States, France and the EU to call a ceasefire, the opposing sides have stepped up hostilities over the weekend, with an accompanying rise in aggressive rhetoric.

Azerbaijan said on Oct. 3 its forces had captured a string of villages.

Armenia acknowledged that ethnic Armenian fighters were under pressure in some places and said the situation on the ground was fluctuating.

The clashes are the worst since the 1990s, when some 30,000 people were killed. They have raised international concern about stability in the South Caucasus, where pipelines carry Azeri oil and gas to world markets.

Multiple UN resolutions, as well as many international organizations, demand the withdrawal of the occupying forces.

The OSCE Minsk Group – co-chaired by France, Russia and the US – was formed in 1992 to find a peaceful solution to the conflict, but to no avail. A cease-fire, however, was agreed upon in 1994.