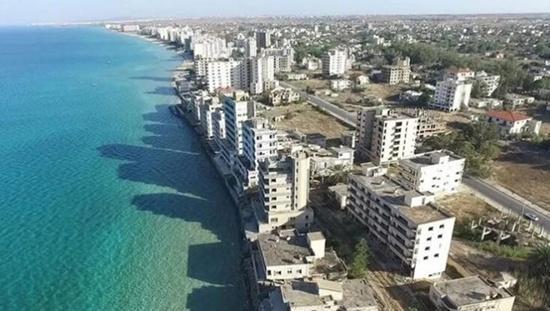 Turkish Cypriot authorities have partially opened public access in the town of Varosha, which had been abandoned for the past 46 years.

Residents began to visit a small part of the city’s coastline and the Democracy Road, which has ruined buildings on its right and left.

A 2.5-kilometer line on the beach where barbed wires were removed has been open to daily visits as of yesterday.

Visitors will be able to walk to the Golden Sands Hotel, once the most luxurious hotel in the area, passing through a military station, which was used as an officer’s club by the Turkish army until 17:00 every day.

The opening was expected to take place with a massive ceremony, but the Turkish Cypriot election board banned any ceremony in or around the region due to “election restrictions.”

The Turkish Cypriots will go to the polls on Oct. 11 to elect their president, a chief negotiator for the Cyprus problem said as the reopening of the coastal part of the city came three days before the election.

Locals who wanted to visit the area yesterday handed over their identity cards to military officers and entered the closed city with a numbered document they received from the authorities.

Police and soldiers waited at the beginning of the streets where entrance was prohibited while the leaflet was distributed, and warnings were made to pay attention to the rules.

Authorities called for attention to the debris that could fall from dilapidated buildings, water wells and the presence of poisonous animals such as snakes.

Although the use of drones is prohibited, taking photos in the area is allowed, according to the Turkish Cypriot media.

Turkish Cypriot Prime Minister Ersin Tatar pointed out that this opening was of great importance, while Turkish Cypriot Leader Mustafa Akıncı and opposition leaders expressed the need to consider Varosha as a part of the comprehensive settlement of the Cyprus problem.

On Oct. 6, Tatar made the opening announcement in Ankara alongside Turkey’s President Recep Tayyip Erdoğan, who said he backed the decision on Varosha, sealed off within barbed wire for decades.

In late evening of the same day, however, Turkish Cyprus’ coalition partner People’s Party (HP) withdrew from the government over the decision ahead of presidential elections.

Former HP Leader and the Foreign Minister Kudret Özersay had said that the decision over the opening of the Varosha region, which has been closed to the public since 1974, was not shared with them.

He had accused his coalition partner of making an “election investment.”