Escalating nationalist fervor in Turkey, fueled by regional conflicts the country is involved in, has “obliterated space for advocates of peace and democracy,” and deepened fears among minorities, Armenian opposition lawmaker from the Peoples’ Democratic Party (HDP), Garo Paylan, said in an op-ed for the New York Times on Thursday.

Correlated to the diminishing democratic space in Turkey is the country’s desire to get involved in regional conflicts, including in Syria, Libya and most recently Azerbaijan, Paylan said, as the government seeks to increase Ankara’s military footprint abroad and enhance its position as a regional power.

Turkey is closely involved with the conflict between Azerbaijan and Armenia over the Nagorno-Karabakh enclave, by providing weapons, armed drones and a propaganda machine to Azerbaijan, with which it shares ethnic bonds, the lawmaker said.

These bonds manifest in the motto, “Two states, one nation,” and Turks and Azeris bond further over their shared hostility to Armenia. The day after the decades-long Karabakh conflict flared up, on Sept. 28, a long convoy of cars filled with men waving Turkish and Azeri flags drove through the Kumkapı district that is home to the Armenian Patriarchate of Istanbul, and many Armenian families. They were honking their horns and chanting nationalist slogan throughout their spontaneous demonstration.

“The car rally was a provocation,” Paylan said, “a threat that filled my community, the tiny Armenian community in Turkey with fear.”

Paylan himself was targeted, as one of two Armenians in the Turkish parliament, and the only opposition one. A Turkish think tank took out a full-page ad in one of several pro-government newspapers to accuse Paylan of treason and his party HDP of terrorism.

The reason for the attack on the deputy’s character was his comments on the conflict, where he condemned the Turkish government for “pouring fuel to the flames.” Paylan also tweeted out a message of solidarity with “Armenians and Azeris who demand peace,” saying, “There are no winners in war.”

“As an Armenian from Turkey and a descendant of genocide survivors, I know very well the meaning of this message,” Paylan said.

The lawmaker may soon lose his parliamentary immunity over allegations of “attempting to overthrow the constitutional order,” which would likely lead to his arrest. “This was already done to (former HDP co-chair) Selahattin Demirtas,” he wrote, “and thousands of other H.D.P. members and officials who are in jail.”

The HDP was founded during a more hopeful time, Paylan said, when Turkey was a “relatively promising democracy, on path for European Union membership and calling for regional peace … at one point, we were even close to normalization of relations with Armenia.”

Paylan was elected in 2015, “exactly a century after my great-grandfather was killed in the Armenian genocide,” and around the time Turkey “took a path toward authoritarianism.” Erdoğan has since established his one-man regime, moved away from democracy, and allied himself with ultra-nationalists, he said.

Repeating a call for peace, Paylan said Russia brokering a ceasefire in the Karabakh conflict “left Turkey out of the diplomatic game,” and that the path to relevancy for Erdoğan would be if he would “stop inflaming tensions in the Caucasus and support the cease-fire.” 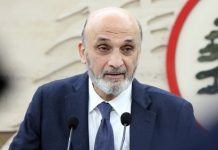 Geagea Compares FPM and Its Supporters to ‘1931 Nazis’