Turkey and Japan are geographically far from each other but their relationship is based on the “two states, one heart” understanding, the Japanese envoy has said, emphasizing a growing interest in his country for cooperation with Turkey in Central Asia and Africa as well as for new bilateral investment opportunities.

Japanese Ambassador to Turkey Akio Miyajama, who has fulfilled his three years in Ankara, expressed his views and emotions about Turkey in a farewell interview with the Hürriyet Daily News. Miyajama has been appointed as Japan’s ambassador to Warsaw.

Here is an abridged excerpt of the interview:

Thank you very much for this farewell interview. How do you feel about leaving Turkey after serving your three-year term?

Thank you very much for this opportunity. Ending my three-year term, I have a kind of mixed feelings.  It’s very sad, but at the same time, I am full of gratitude. And because my destination is Poland, it’s not so far away so I can come back and my friends can visit me. It’s the end of one phase of our friendship, but new phases of it will start.

You have extensively traveled around Turkey. Could you tell which parts of this country impressed you the most?

I visited and passed by 57 cities in my three years. I really enjoyed seeing many places in Turkey and meeting people, appreciating rich culture and history, of course, its very unique cuisine. It’s very difficult to say which part of Turkey pleased me the most.

Can you name the three best spots?

That’s also very difficult. But one thing that I would like to say is that for a Japanese, Turkey is Istanbul or Cappadocia. But by living here three years and visiting so many places, I can say that Turkey is much, much, much more than that. It is so diverse and attractive. And also, when you go out and meet people, you know how warm-hearted the Turkish people are.

Before I came here as an ambassador, I visited Istanbul 30 years ago to attend an international conference. That impression was very strong. So that was the first place I visited, and I was overwhelmed by the richness of culture, Topkapı Palace, Hagia Sophia, and the old city. That’s why Istanbul is number one.

After presenting my credentials in early November (2017), I went to Gaziantep. That was a really eye-opening experience. The main purpose of my visit to Gaziantep was to see how the Turkish people were taking care of Syrian refugees as we have a Japanese project that helped many municipalities in hosting communities.

When I visited the Black Sea region, I see that this region is also very special for Japanese people.  Japan is an island country and a fish-eater. So Hamsi or Kalkan, the very fresh fishes are wonderful. When I look at tea fields in the hills of the Black sea, I see it exactly the same as Japan tea fields. After visiting all these places, I feel it is my duty and obligation to tell them how attractive Turkey is. A one-week trip to Turkey to visit Istanbul and Cappadocia is not enough. 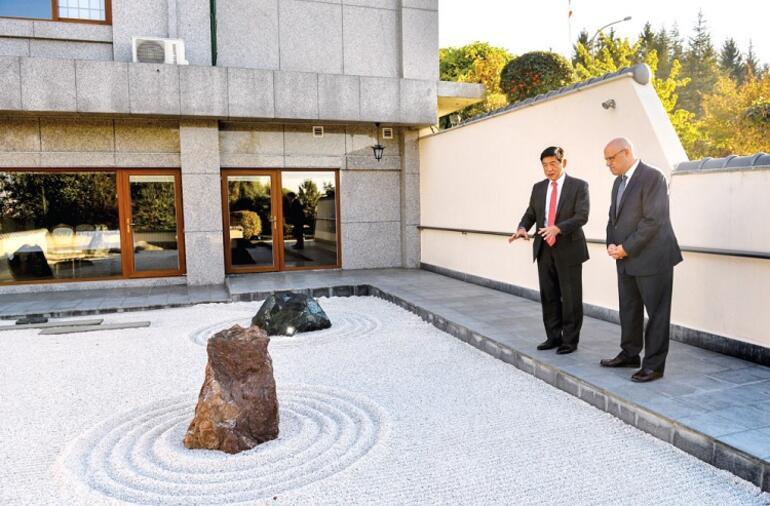 Turkey as a manufacturing hub

What can you say about the Turkish-Japanese partnership?

Economic cooperation needs to be expanded. Now Japan-Turkey new economic partnership treaty negotiations are ongoing. We have achieved quite substantive development so we hope that both sides will make the best efforts to narrow the gap and make an agreement to bring more trade and investment to both sides.

You know Toyota is one of the top profit makers for Turkey. Toyota Turkey people are very, very proud of the quality of the car produced here, one of the highest quality cars. They export to more than 100 countries, mostly to Europe. I heard despite COVID-19, their factory is working at full capacity. Turkey has great potential for the manufacturing industries and because of its strategic locations, it can boost exports.

In the Manisa area, Mitsubishi has a very good modern air conditioning complex and they are exporting a lot. Turkey, as a manufacturing base, is one thing, but Turkey has a big domestic market as well. That is another reason why Japanese companies come here. And third, these days, we are increasingly interested to work together with our Turkish partners in Central Asia and Africa.

The Japanese people see Turkey in a bilateral context. But Turkey is growing regionally and globally. This is a kind of global hub and it is a strength for Turkey. And Japan needs Turkey, the Turkish companies, the hardworking and disciplined attitude (of the people) and young people. Japan needs that. Japan needs Turkey’s vitality and energy. And Turkey also needs Japan in terms of our planning, financing and technology. If they (Turkish and Japanese companies) can find good partners with trust, they can have a very good synergy effect. As I said many times, Japan and Turkey are geographically far away, but our hearts are close. We are two states, one heart. I really feel that.

That’s a very important and strong motto, isn’t it?

Yes, because I am really convinced. I am not just saying it because I am supposed to say it. Because I feel it. Maybe I have used this motto 100 times, every time when I say this, Turkish people are nodding. That why I felt that I am speaking exactly the right message and that is something they are also feeling.

How do you consider Turkey’s interest in Japan and Asia?

Turkey needs to engage more with the Asia-Pacific definitely for its continued development. Europe remains most important as its trade partner, traditionally and historically, I understand that. But just thinking about the economic gravity of the world, it is shifting towards Asia-Pacific. Turkey is definitely a latecomer. It is not easy to penetrate into Asia market because it is already well developed. I cannot be too optimistic about the prospect but we know that for Turkey to develop further in order to continue dynamism it needs to engage more with Asia; Japan, India, ASEAN, Korea…. I have given lectures, maybe more than 10 times. I always said: Look to Asia and your best partner is of course Japan.

Turkey has recently launched ‘Asia Anew.’ What do you think of this policy?

(Foreign Minister) Mr. Mevlüt Çavuşoğlu is a very good friend of Japan. I presented him with Japan’s highest award, which is one of my highlights in my three years term. I was very impressed that he launched the Asia Anew policy. Turkey has just begun outreach to this region, and we are waiting for what we can achieve together.

What would be your last message to Turkey and its people?

My message is ‘thank you, thank you very much.’ In Japanese, we have a saying, which could be translated to ‘Do your best and let’s work together. We will be your best partner.’