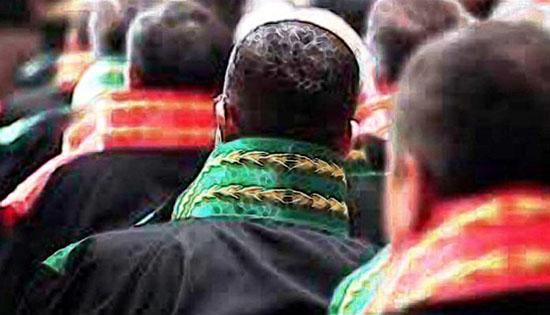 Two of 11 Turkish judges and prosecutors dismissed from the legal profession due to alleged affiliation with the Gülen movement, which is deemed by President Recep Tayyip Erdoğan and his ruling Justice and Development Party (AKP) as a “terrorist organization,” were detained on Tuesday.

According to Turkish media reports, the judges and prosecutors had been removed from their posts by the Board of Judges and Prosecutors (HSK), Turkey’s key judicial body responsible for appointments and other personnel-related issues in the judiciary, a day before the detentions.

The Turkish government accuses the Gülen movement, a religious group inspired by self-exiled Muslim cleric Fethullah Gülen, who lives in the US, of orchestrating the abortive putsch that claimed the lives of 251 people on July 15, 2016.

Although Gülen and members of his faith-based movement strongly deny any role in the attempted coup or any terrorist activity, Ankara launched a massive purge under the pretext of an anti-coup fight soon afterward and has removed more than 130,000 people from civil service jobs.

During a two-year state of emergency declared by the AKP government days after the coup attempt, around 4,500 judges and prosecutors were dismissed from the legal profession, with nearly 2,000 of them arrested.

According to Turkey’s January 2020 Universal Periodic Review (UPR), a United Nations mechanism established to periodically examine the human rights performance of all UN member states, a law adopted in July 2018 “extended the possibility for dismissal for a further three years with a continuing risk for judges and prosecutors to be dismissed arbitrarily” after the end of the state of emergency.

Historical monastery to open for visit after 60-years hiatus