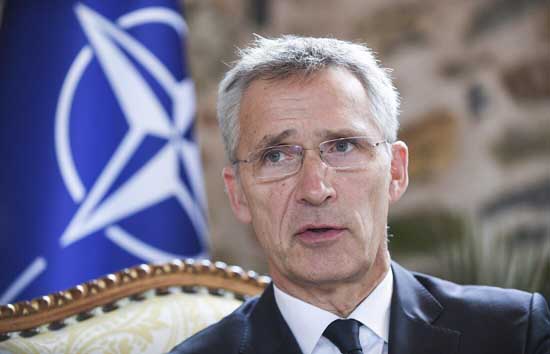 NATO Secretary-General Jens Stoltenberg said on Thursday that Turkey and Greece held daily technical meetings at NATO headquarters in an effort to avoid escalation in the eastern Mediterranean.

“I think that’s one of the advantages of NATO, is that we provide a platform for allies to meet and to discuss,” Stoltenberg said.

Since the beginning of September, NATO members Greece and Turkey have held a series of technical talks brokered by the military alliance to establish and maintain a de-confliction mechanism to prevent a direct confrontation in the eastern Mediterranean, where the countries are locked in a months-long standoff over territorial claims.

Creating the mechanism was important because “we need to make sure that we have the tools to prevent incidents and accidents”, Stoltenberg told reporters, following a series of meetings with NATO defence ministers.

But the risk of a clash between the neighbouring countries appeared to rise again on Thursday following reports that the Greek navy had encircled the island of Kastellorizo, located a few kilometres off mainland Turkey, ahead of planned hydrocarbons exploration by the Turkish research ship Oruç Reis in disputed waters.

“The responsibility of preventing incidents and accidents at sea cannot solely be put on the shoulders of the captains and the crew and the soldiers and the pilots who are operating in the eastern Mediterranean,” Stoltenberg said.

Separately, the secretary-general called on Turkey to help bring an end to fighting between Azerbaijan and Armenia in Nagorno-Karabakh, a region located within Azerbaijan’s borders but controlled by ethnic Armenians.

Turkey has been providing military support to close ally Azerbaijan and indicated on Thursday that it was willing to send troops to the conflict upon the Azeri government’s request.

“Turkey is a valued ally, but I also expect Turkey to use its considerable influence in the region to calm tensions,” Stoltenberg said.