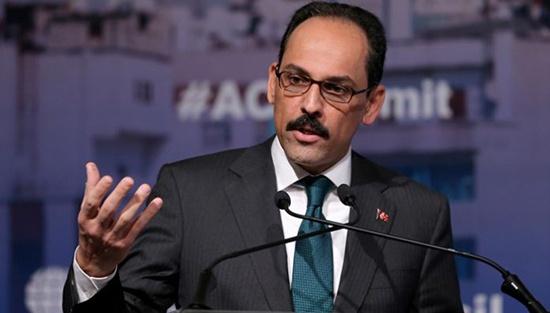 Turkish President Recep Tayyip Erdoğan’s spokesman condemned the killing of French teacher Samuel Paty in a tweet after France expressed disappointment over the absence of an official statement by Ankara.

“At this point, we strongly condemn the monstrous murder of Samuel Paty in France and we reject this barbarism. There is nothing legitimate about this murder,” spokesman Ibrahim Kalın said on Twitter on Monday.

On Sunday, French Foreign Minister Jean-Yves Le Drian said Paris had noted “the absence of messages of condolence and support” from the Turkish president after the teacher’s murder.

France recalled its ambassador to Turkey for consultations on Saturday after Erdoğan questioned the mental health of Macron and his attitude toward Islam and Muslims. Macron had responded to the brutal killing in a speech where he suggested that some of France’s 6 million Muslims wanted to form a ‘counter-society’ and warned of ‘Islamist separatism’.

Paty was a history professor who had taught a class on freedom of expression during which he used controversial caricatures of Islam’s Prophet Mohammed from satirical newspaper Charlie Hebdo. The slaughter of the teacher by a suspected terrorist in a Paris suburb reignited tensions over secularism, Islamism and Islamophobia in France.

France “will not give up our cartoons”, Macron said.

Kalin defended the Muslim community’s anger over the caricatures of Prophet Mohammed.

“Some may not understand how we love our Prophet more than ourselves. They may not get their heads around how we see an insult to him as an insult to us. They may call our affection ‘fanaticism’. That is their misfortune,” Kalın said.

“We will explain this to them persistently and in the best way possible,” he said.