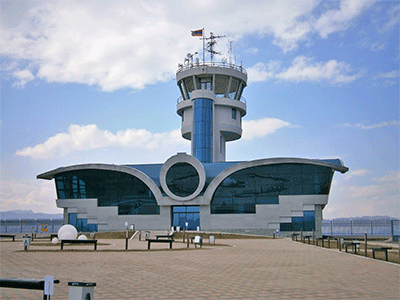 Since the issue of security in Artsakh and the establishment of permanent links between Artsakh and Armenia became essential in the post-war period, talks on the reopening of the Stepanakert airport have resumed.

Hetq will touch upon the history of the Stepanakert Airport, focusing on efforts in 2009-2012 to reconstruct and reopen it.

Although Stepanakert Airport was under the control of Azerbaijani aviation authorities during the Soviet era, the role of the Armenian Civil Aviation Authority in its development was significant.

While the airport has been under the total control of Artsakh since 1992, no international flights have ever taken place there even after its reconstruction and reopening. The skies of Artsakh are internationally closed for civil flights at the request of Azerbaijan, and Artsakh aviation authorities, like the whole republic, enjoy no international recognition.

On the other hand, the Azerbaijani side has no de facto authority over the airport. It is also no secret that before the last war there were helicopter flights from Armenia to Artsakh, mainly to transport officials.

Prior to the recent war, there were three airports in Artsakh, two of which, the former Aghdam (Akna) and Fizuli (Varanda) structures, were destroyed after the first Artsakh war. Until September-November of last year, they were very close to the Artsakh-Azerbaijani front and, of course, did not serve their original purpose. After the November 9 trilateral ceasefire, they were handed over to Azerbaijan. Stepanakert, the only airport in the territory of the former Nagorno-Karabakh Autonomous Oblast (NKAO), has always been mostly operable. The extent to which it has been effectively used is another issue.

The Stepanakert Airport, near the village of Ivanyan (formerly Khojalu) in the Askeran region, was put into operation in 1974.

Famous aviator Dmitry Atbashyan (1938-2020), who served as head of the Armenian Department of the USSR’s Ministry of Civil Aviation from 1971-1987, in his unpublished book on Nagorno Karabakh aviation, recalls the secretive events of 1979. (Hetq published his book, in sections, in 2018.)

Atbashyan writes that in early 1979 he participated in the work of a secret committee set up by writer, publicist Zori Balayan, which dealt with the problems of Karabakh.

During one of the first sittings of the committee, Atbashyan expressed the opinion that the emigration of the Armenian population from the NKAO was mainly due to the lack of jobs for specialists with higher technical education in the autonomous region. Accordingly, Artsakh youth aspiring to and graduating from universities found jobs outside the NKAO, which led to a population outflow. The head of the Armenian Civil Aviation Department told the secret committee that he would assume the task of creating 120 jobs in the NKAO by rebuilding Stepanakert’s airport, allowing it to accommodate Yak-40 passenger planes, deemed modern aircraft at the time.

Haytransgaz Production Union Head Georgi Tataryan welcomed Atbashyan’s idea and promised to build a gas pipeline to Nakhichevan through the territory of the NKAO and to install important pipeline junctions in the region. Minister of Construction Materials Industry of Armenia Litvin Ghazaryan promised to establish two stone processing plants in the territory of the NKAO for the same purpose. Atbashyan recalls that academician and economist Abel Aghanbekyan sometimes participated in the meetings of the secretive committee.

Days after presenting his idea for the reconstruction of the airport, Atbashyan talked about it with a relevant official of the USSR Ministry of Civil Aviation. The plan was forgotten for a while. The issue was raised again when Atbashyan met his “colleague” Nuri Aliyev, the head of Azerbaijan’s Civil Aviation Department, in the reception hall of Minister Boris Bugayev in Moscow. Aliyev had rudely stated that he had known nothing about the construction of the new airfield in Stepanakert and Atbashyan was to blame for the construction. Aliyev threatened the Armenian official, saying he was a personal friend of Bugayev and would make a point to get the Russian minister involved in the matter. To prove his close ties with Bugayev, Aliyev showed Atbashyan an expensive watch he received from the Russian.

Pavel Anisimov, Second Secretary of the Central Committee of the Communist Party of Armenia, invited Dmitry Atbashyan to a meeting in Yerevan.

“What did you do in Karabakh?” Anismov, a Russian by birth, asked Atbashyan.

Seeing the Armenian aviator’s surprised look, he added, “Well, well, we know everything.”

Anisimov then called his counterpart from Azerbaijan, Konovalov, the second secretary of the Central Committee, and said that Atbashyan was with him and turned on the microphone. “OK. Ask him. The airport is built. Now, what will he do to run flights there?” Konovalov asked from Baku.

The head of the Armenian department, continuing to deny his participation in the reconstruction of Stepanakert airport, answered that nothing should be done.

Atbashyan said that in a half a year at the latest, the USSR State Planning Committee would ask Nuri Aliyev about the effectiveness of the investments made at the airport, and that Aliyev himself would call for flights to Stepanakert from Yerevan, since there were not enough passengers from Baku to Stepanakert and flights would not be expedient.

Anisimov and Konovalov agreed with Atbashyan’s argument, but Anisimov advised the aviator not to report the incident to the Armenian leadership, particularly First Secretary of the Central Committee Karen Dmerichyan. Atbashyan was surprised by this request, as it was known that the second secretaries of the Soviet republics, who were usually Russians, were considered the “eyes, ears and hands” of the Kremlin.

Thus, the reconstruction of Stepanakert airport became a fact. An active air connection was established between the regional center of the NKAO and the cities of Armenia. Yak-40 planes flew to Stepanakert from Yerevan (several times a day from Erebuni Airport), Goris and Kapan.

The Artsakh Liberation Movement (ALM), which began in February 1988, opened a new page for the airport. After the imposition of a state of emergency in the NKAO in January 1990, the airport was guarded, and the personal belongings of passengers (mostly Armenians) were inspected by Soviet internal troops. In the fall of 1990, with the consent of USSR Interior Minister Vadim Bakatin, those functions were transferred to Azerbaijan, to the OMON (special military units). In his book, Lieutenant Colonel Viktor Krivopuskov, an employee of the Soviet Ministry of Internal Affairs, notes that the persistence of the Azerbaijani leadership, supported by the notorious general Vladislav Safonov, was a major factor in this.

How Stepanakert Airport security guards humiliated Armenians travelling to Armenia is another topic.

After the start of the ALM in 1988, the Azerbaijani leadership began to turn the village of Khojalu, near the airport, into a large military base. Azerbaijanis were shipped in to increase the population. Among the residents were many Azerbaijani OMON members and militants of the Azerbaijani Popular Front. In 1990, Khojalu was declared a town and recognized as the regional center of the NKAO instead of Stepanakert. In January 1992, official Baku decided to rename the Askeran region of Artsakh, which had already declared its independence, Khojalu. It is noteworthy that Khojalu was also built at the expense of the airport. Krivopuskov says that the new buildings in the settlement were built in the direction of the runway.

“The calculation was that being close to residential buildings would make it dangerous for planes to take off and land at the airport. The closure of the airport was becoming inevitable. Moreover, it was no longer called Stepanakert Airport. The Supreme Soviet of Azerbaijan renamed it Khojalu,” Krivopuskov, a former Soviet Interior Ministry official, recounts in his book.

Journalist Svetlana Kulchitskaya, in her film “Live” about Artsakh of May 1992, also provides some details about the airport, noting that its runway was targeted from Aghdam and damaged. Footage of Yak-40 planes flying from Stepanakert to Armenia, made earlier, are shown, and the journalist mentions that they were in fact the last planes flying from Artsakh to Armenia.

In 1991-1992, Khojalu became a real threat to Armenians. NKR Supreme Council Member Levon Melik-Shahnazaryan, in his book Azerbaijan’s War Crimes against the Civilian Population of the Nagorno Karabakh Republic, writes that in the spring of 1991 Khojalu-based militants began to attack Armenian settlements. More than 700 Armenian civilians were taken hostage. Hundreds of hectares of arable land were destroyed, and thousands of farm animals were stolen. Most settlements were deprived of electricity and water. Inter-regional roads, the railway, and the airport vital for Artsakh were closed. In September 1991 Azerbaijanis of Khojalu targeted Stepanakert and environs, and border villages, with Alazan and Crystal missiles. In January 1992, the Azerbaijani military added Grad rockets to its arsenal.

The only way to prevent this was to neutralize Khojalu, to clear it of enemy forces.

The Karabakh command structure argued that by neutralizing Khojalu, the Armenian side would first take control of the airport and provide air travel with Armenia. This meant importing the necessary means and resources from abroad. Second, by taking Khojalu, the area would be cleared of OMON forces, whose presence constantly hindered links between several regions with the capital, and the danger of their attacking surrounding Armenian settlements would be eliminated. Finally, since the Azerbaijani parliament had renamed Stepanakert Khankendi and declared Khojalu the regional center of the NKAO, neutralizing Khojalu would deal a major blow to the Azerbaijanis and make their political move meaningless.

Russian commentator Kirill Stolyarov, who had some sympathy for Ayaz Mutalibov (Azerbaijan’s first president; 1990-1992), writes, in his book Collapse. From Nagorno-Karabakh to the Belovezhskaya Pushcha, that Mutalibov had ordered the demolition of the airport runway and equipment.

Naturally, he well understood the role of the airport for Artsakh.

Prior to the liberation of Shushi and Lachin (Berdzor), the airport was the best way to connect Armenia and Artsakh.

Mutalibov’s order, however, did not materialize. It is important to note that Khojalu and Aghdam were under the control of the Azerbaijani opposition Popular Front.

On February 26, Armenian forces cleared the airport of Azerbaijani troops and neutralized the Khojalu military base. The Armenia-Artsakh air route was opened.