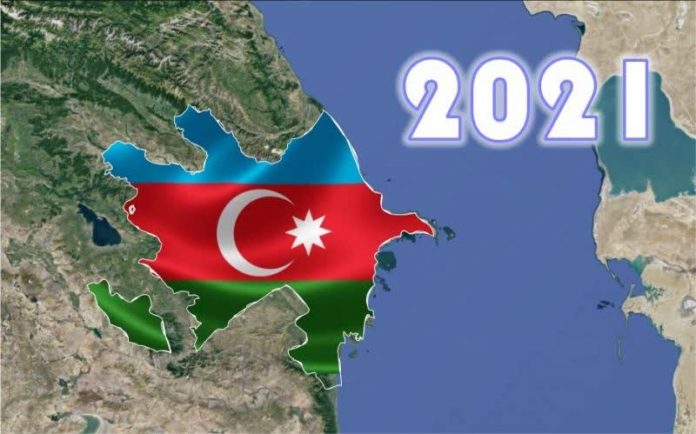 https://www.turan.az-For objective reasons, in recent years, all non-regional players in the Nagorno-Karabakh conflict have sharply reduced their participation in decision-making on its prevention. Most likely, thirty years of practice has convinced that the conflict is completely frozen, and its individual outbreaks can be extinguished quickly enough, and therefore its resolution can be postponed until better times. In these conditions, it became possible to change the international status of the Nagorno-Karabakh conflict to a regional one and attempt to change its format through the efforts of two regional powers: Russia and Turkey. For various reasons, the result of the reformatting did not suit almost all non-regional players, and most of them are wondering how the situation could be changed in the coming year.

The most significant paragraph in the signed trilateral statement is often called the ninth paragraph on two corridors: the already existing Lachin and Meghri, which should be opened through the southern Armenian region of Syunik (Zangezur) for economic communication between the main territory of Azerbaijan, the Nakhichevan Autonomous Republic and Turkey. Some authors believe that this clause can become an effective counterbalance that will give stability to the entire structure of a peaceful settlement and make it beneficial both for the parties to the conflict and for all regional parties.

Let us remind that the idea of ​​joining the two mentioned corridors as a key to eliminating territorial disputes between Azerbaijan and Armenia emerged in the early 1990s in the proposals of Paul Goble – Special Adviser to the US Secretary of State.

We think that such a counterbalance can only be the implementation of the idea of ​​two territorial entities in Armenia and Azerbaijan, endowed with the same statuses and, if necessary, including transport corridors.

The only way out of the situation is not to formulate and support mutual compromises, which have not yet acquired the outlines of reality, but to create mutually balancing, restraining and opposing models of the political structure of states – Azerbaijan and Armenia.  The talk is about the formation on the territory of the two countries of formations, equal in all respects, with commensurate rights and obligations to states, jointly determining the degree of their autonomy. Only in this case, there will be a real mechanism for preventing conflicts and even wars, since any unilateral voluntarist decision will run into counteraction.

Only in this case it will be possible to avoid control over the corridors by a third force, to preserve the sovereignty of Azerbaijan and Armenia over these territories. By consolidating its presence in the two neighboring states of the South Caucasus, Russia will have a much greater opportunity to influence the processes in Georgia, preserving the previous levers of influence through the severed Abkhazia and South Ossetia.

The trilateral agreement, signed with the mediation of Russia, left not only the other co-chairmen of the Minsk Group, but also Turkey, which played a significant role in the war for Karabakh, behind the board. Until now, Russia has been the only guarantor of maintaining the agreement, which means that extra-regional forces will take concrete steps to change the situation that is undesirable for them. The European Union will seek energy supplies bypassing Russia and partly Turkey, with which there have been several serious conflicts lately. Here, as we have already noted, much depends on the success of the new nuclear deal with Iran. In addition, the EU, most likely, will raise the question of the further fate of NATO’s Partnership for Peace and the European Union’s Eastern Partnership programs.

Russian analysts note that in the current conditions, the salvation of the unrecognized Armenian state (the so-called NKR) within any borders turns into a geopolitical task for the Russian Federation, since its fall will provide access of NATO to the Caspian Sea and to the borders of its two potential adversaries: the Russian Federation and Iran.

The change of power in Washington should answer one important question for the whole world: is the decline of US influence on world politics temporary, or is the era of a gradual collapse of this influence in various strategic regions of the world? It is interesting that today such regions can be considered the Middle East and the South Caucasus, in the struggle for which Washington recently yielded the initiative to Moscow, Ankara and Tehran. At the same time, the volatility of the situation and the unpredictability of future events are largely due to the lack of clear regional hegemony capable of ensuring peace in the region and preventing rivals. Moscow, for example, even in the zone of its traditional influence in the South Caucasus today is forced to act in tandem with Ankara.

The outcome of the conflict after the second Armenian-Azerbaijani war is traditionally trying to drive into a situation of increasing dependence on external forces assessing their interests in this conflict and looking closely at potential allies and enemies.

France has taken the most active position in this regard. Although E. Macron’s desire to bring France independently or through a tandem with the FRG to a new level of influence on international politics is obvious, in general all actors understand that France is an insignificant player with limited authority. Some analysts believe that the clashes between Paris and Ankara are because Macron’s foreign policy shows some similarities with that of Erdogan, as both leaders are determined to expand their countries’ regional influence. At the same time, Macron is clearly losing, and therefore Moscow and Ankara fundamentally do not take into account France, which is deprived of the possibility of military influence on at least one conflict in the regions of the Middle East and the South Caucasus. There is no doubt that France’s role in international politics will only decline in the future.

A completely different attitude is shown towards Great Britain, which seems to have withdrawn from even the conflict that is taking place in the zone of its sensitive economic interests. Western commentaries are full of claims that behind Ankara’s policies, especially in its relations with Moscow and Paris, is London, which is extremely interested in undermining Russia’s destructive influence on international affairs and reducing the potential of France’s alliance with the FRG. In this context, it turns out that Moscow is partly forced to cooperate with Ankara and cannot always impose on the latter all the principles and practices of asserting its national interests. On the other hand, the EU’s hesitation in pursuing a tough policy towards Turkey is explained.

Turkey, with the help of Great Britain (withdrew from the EU), seeks to turn the Southern Gas Corridor into a mechanism for influencing EU policy with the prospect of connecting Central Asian states to this corridor. Israel, which is forming new, including energy alliances, with a part of the Arab countries, has faced an unpleasant dilemma of choice: Ankara or Tehran.

Any model of geopolitical stability (or, conversely, instability) in the South Caucasus has determined and will continue to determine the routes for transporting energy resources and laying communications from the Central Asian region both to the West and to the East. Suffice it to recall what a difficult game has been going on for several decades on the issue of laying oil and gas pipelines. Suffice it to recall the difficulty with which the route Baku – Tbilisi – Ceyhan was mastered. Remember the problem in connection with gas supplies: it is vital for Azerbaijan to connect Turkmenistan to its gas projects. However, since this turned such a tandem into a serious competitor to Gazprom, Russia cut off Turkmenistan, using the unresolved legal status of the Caspian Sea and buying Turkmen gas until then, until China ran a gas pipeline in its direction.

Now China has also joined the energy battle. This means that soon we will witness the strengthening of the geopolitical connectedness of the regions of the South Caucasus and Central Asia with a certain shift of the conflict potential towards the second region. Maybe therefore, we witness forming a territorial dispute between Russia and Kazakhstan.

The pandemic reduced interest in the Great Silk Road project, but, naturally, did not stop its progress. Most likely, in 2021, the Western world will face a dynamically advancing China, which can choose Russia as its temporary ally.

The most likely field of such a collision will be the South Caucasus and Central Asia. Thus, Azerbaijan has very little time left to overcome the risks and threats after the second Nagorno-Karabakh war.