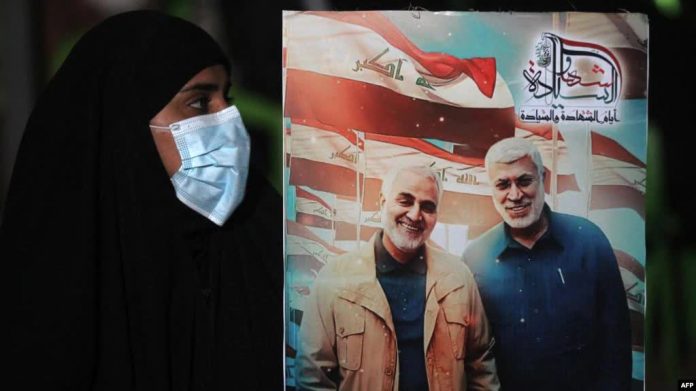 Thousands of Iraqis converged on central Baghdad’s Tahrir Square on January 3 to mark the first anniversary of the twin assassinations in a U.S. air strike of a top Iranian general and a leader of an Iraqi powerful Shi’ite militia.

Many of the demonstrators were holding posters of Soleimani and al-Mohandes while some demanded the expulsion of U.S. troops from Iraq.

Thousands of mourners marched on the highway leading to the Baghdad airport on the evening of January 2 to honor Soleimani and al-Mohandes and eight other men killed in the U.S. attack.

The scene of the U.S. drone attack was turned into a shrine-like area sealed off by red ropes, with a photo of Soleimani and al-Muhandis in the middle, as mourners lit candles.

The assassination of Soleimani had stoked fears of military conflict between the United States and Iran.

Tensions between Washington and Tehran have escalated since U.S. President Donald Trump withdrew from the Iran nuclear deal in 2018 and reimposed tough economic sanctions.

At the time of Soleimani’s killing, Trump posted on Twitter that the Iranian had “killed or badly wounded thousands of Americans over an extended period of time and was plotting to kill many more.”

Iran responded to the killing by launching a volley of missiles at bases in Iraq hosting U.S. troops.

Security measures have been tightened in Iraq and security forces were deployed in great numbers. The Interior Ministry said on January 2 that a plan had been drawn up to safeguard the protests.

Security measures were also stepped up in the vicinity of Baghdad’s Green Zone, home to foreign embassies and government offices.

For weeks, U.S. officials have suggested Iran or allied Iraqi militia could carry out retaliatory attacks to mark the January 3 anniversary of Soleimani’s assassination.

On January 2, Iran’s Foreign Minister Mohammad Javad Zarif urged Trump not to be “trapped” by an alleged Israeli plan to provoke a war through attacks on U.S. forces in Iraq.

“New intelligence from Iraq indicate(s) that Israeli agent-provocateurs are plotting attacks against Americans — putting an outgoing Trump in a bind with a fake casus belli (act justifying war),” Zarif said on Twitter.

“Be careful of a trap, @realDonaldTrump. Any fireworks will backfire badly, particularly against your same BFFs,” Zarif added.

A day later, an Israeli official dismissed the allegation that his country was trying to trick the U.S. into waging war on Iran as “nonsense.”

It was Israel that needed to be on alert for possible Iranian strikes on the one-year anniversary of Soleimani’s assassination, Energy Minister Yuval Steinitz said on Kan public radio on January 3.

With reporting by dpa, Reuters, and AP