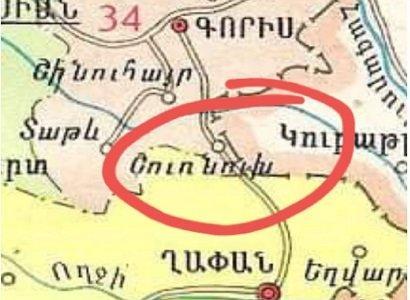 Traitor Nikol, who is clung to the seat of Prime Minister of Armenia, is demarcating with the GPS system along with Azerbaijan and is absolutely ignoring the maps published during the years of the USSR…Speaking out about those maps isn’t in the favor of the traitor of the nation and the people serving him since Shurnukh village and the hydroelectric power plant of Tatev are indicated as a part of Armenia on those maps…Nikol is guided by a Google map which, as I mentioned, might have received an order from Baku and extended the border of Armenia a little to the west, as a result of which Shurnukh village has gone from being a borderline village to a settlement that is shared, and the hydroelectric power plant of Tatev is now under the control of Azerbaijan…

As for those worshipping traitor Nikol and the dirt, let them continue to worship and believe in the national traitor humiliated by Ilham who continues to implement his anti-Armenian plans step-by-step…”