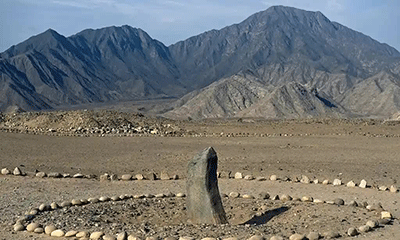 Squatters reportedly belonging to one family claim site of 5,000 year-old ruins was given to them in the 1970s

The Guardian- Dan Collyns in Lima

Illegal squatters have invaded the ruins of the oldest city in the Americas, and made death threats against Ruth Shady, the celebrated Peruvian archaeologist who discovered the 5,000 year-old civilization.

The threats came via telephone calls and messages to various workers at the archeological site at the height of Peru’s Covid-19 pandemic. They followed reports to the police and prosecutors about the invasions of the ancient ruins of Caral.

“They called the site’s lawyer and said if he continued to protect me they would kill him, along with me, and bury us five metres below the ground,” said Shady, 73.

“Then they killed our dog as a warning. They poisoned her, as if to say, look at what will happen to you,” she said.

It is not the first time Shady has been threatened or attacked. In 2003, she was shot in the chest during an assault on the 626-hectare (1,546-acre) archaeological complex which was declared a Unesco world heritage site in 2009.

After nine invasions of the sacred city during the pandemic period, Shady and her team repeatedly asked the authorities to intervene.

“There is a feeling that there is no authority dedicated to the protection and defence of our heritage. It’s a huge worry,” she said.

In July, squatters using a heavy digger knocked down adobe walls and tore up the ground destroying ancient ceramics, tombs containing mummies, textiles and household remains, before police and the site’s staff were able to stop them.

As a result of Shady’s pleas, a police car now patrols the archeological site day and night but nothing has been done to punish or evict the land invaders.

The squatters are believed to belong to a single extended family, and claim the land was given to them in the 1970s during Peru’s controversial agrarian land reform which was pushed through by a leftist military dictatorship.

Shady denies the claim: “They do not have a single land title. The owner of the land is the Peruvian state.”

A planned eviction of one of the squatters was thwarted in December when a local prosecutor and official failed to give the order to proceed despite having the support of police officers, Shady said.

Land prices in the area have risen from around $5,000 per hectare to as much as $50,000 per hectare, as outsiders rush to buy land around the prestigious archaeological site which is surrounded by a 56 sq mile buffer zone.

Shady, who was named on the BBC’s 100 Women list last year, first visited Caral in 1978. But it was not until 1994 that she discovered the ancient city and began to properly excavate the site, which is situated on a dry desert terrace overlooking the Supe river valley nearly 200km (124 miles) north of Lima.

What she uncovered was the “oldest centre of civilization in the Americas” which Unesco describes as “exceptionally well-preserved” with a complex architectural design with “monumental stone and earthen platform mounts and sunken circular courts”. Organic material found at the site has been carbon-dated back to 2627 BCE

Shady and her team continue to investigate and excavate a dozen former settlements, half of the 24 situated in the Supe valley which form part of the Caral-Supe civilization. Their findings have revealed musical instruments such as flutes made of animal and bird bones and evidence of the cultivation of multi-coloured cotton used in textiles.

“We can’t allow archeological sites to continue being invaded and destroyed because it is an unwritten history and we recover that history through our investigation,” said Shady. “If we can’t do that it is like burning a book which no one will ever read.”

“I hope we can continue to investigate and continue to recover our history because it has such an interesting message,” she added. “It was a very, very peaceful society. We have not found even a single walled settlement.”

“There is message there that we, human beings, should live in harmony between ourselves and nature,” Shady concluded. “We are living through this pandemic, in part, due to our mistreatment of nature.”