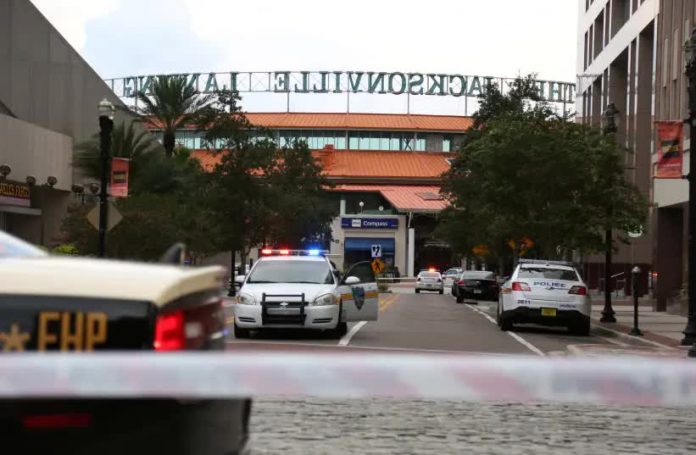 Eight people were wounded in the first shooting, including six who were critically injured.
By REUTERS
Police officers cordon off a street outside The Jacksonville Landing after a shooting during a video game tournament in Jacksonville, Florida August 26, 2018
(photo credit: REUTERS/JOEY ROULETTE)
Police in Florida’s Miami-Dade County said late on Sunday that they were investigating two separate shootings in which 12 people were wounded.
The first shooting occurred in Little River Park at 7:07 p.m. (0007 GMT), according to authorities.
NBC News reported that two unidentified gunmen started shooting at people near a basketball court. Eight people were wounded in that shooting, including six who were critically injured.
Four people were wounded in a separate shooting in Allapattah, police said. The victims were taken to Jackson Memorial Hospital Ryder Trauma Center in stable condition.
“My officers are on the scene of another tragic shooting involving juveniles. This type of gun violence has to end,” Alfredo Ramirez, director of the Miami-Dade County Police Department, said on Twitter.