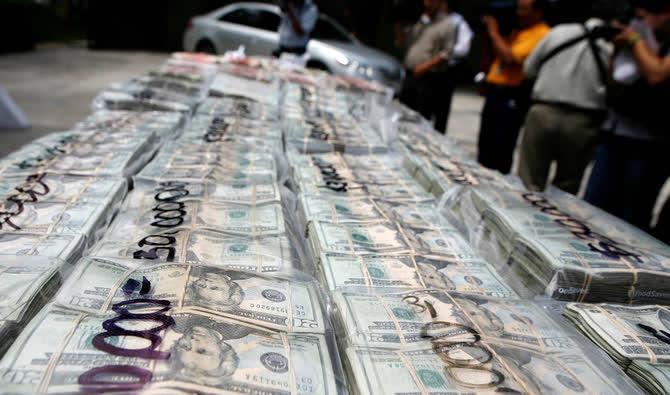 The UN estimates that $800 billion to $2 trillion is laundered through the global financial system every year. (Reuters/File)

The legislation sets penalties for not reporting a company’s beneficial owners of up to two years in jail and a $10,000 fine

WASHINGTON: A major avenue for global money laundering and tax evasion has been closed off by a new law requiring disclosure of owners of US shell companies used to hide billions of dollars.

The Corporate Transparency Act was included in the US defense appropriations bill passed into law by Congress this week, overriding President Donald Trump’s veto.

The law forces “beneficial owners” behind shell companies to report their identities to the US Treasury’s Financial Crimes Enforcement Network, or FinCEN.

While the law still grants them protection from public knowledge — only the Treasury and law enforcement will be able to access the FinCEN database — transparency advocates say it is a huge step against kleptocrats, organized crime and rich tax evaders who have been able to anonymously wash their suspect wealth through the world’s largest economy.

“For years, experts routinely ranked anonymous shell companies … as the biggest weakness in our anti-money laundering safeguards,” said Ian Gary, executive director of the FACT Coalition, which lobbied for the legislation.

“It’s the single most important step we could take to better protect our financial system from abuse.”

The UN estimates that $800 billion to $2 trillion is laundered through the global financial system every year. While much of the attention has focused on tax havens like Panama and the Cayman Islands, experts say that the size of the US economy, and its ability to absorb billions of dollars without notice, has made it crucial for converting illicit funds into legitimate assets.

In early 2020, the Tax Justice Network ranked the Cayman Islands and the US as the global leaders in helping people conceal their finances from law and tax enforcement.

Gary Kalman, the US director of Transparency International, said the Corporate Transparency Act was “foundational” for fighting money laundering.

Despite geopolitical tensions, he pointed out that money has flowed into the US from China and Russia because it was the easiest place to launder it, through properties, corporate assets, securities and art.

“We are the easiest place in the world to set up an anonymous company,” he told AFP before the law had passed.

“We are the dream of any kleptocrat or criminal to hide money.”

By forcing company owners to divulge their identities, he said, the US is establishing a “global norm” for the world’s financial system.

The legislation sets penalties for not reporting a company’s beneficial owners of up to two years in jail and a $10,000 fine.

The legislation is not perfect, say analysts. The FinCEN database will not be open to the public or media, whose efforts have produced the biggest stories about money laundering.