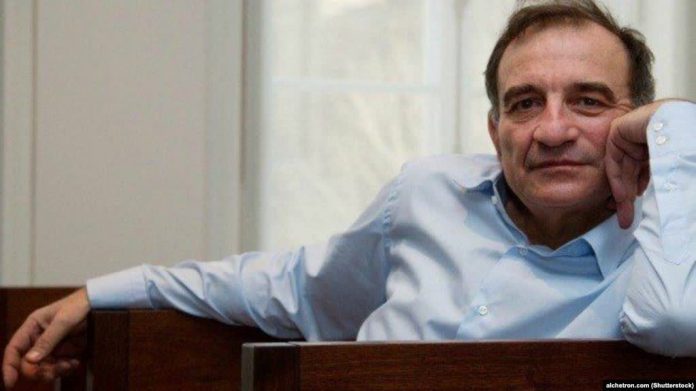 Confusion and intrigue have reigned in Kyrgyzstan since compromised parliamentary elections on October 4, 2020, sparked street protests that brought down the government and forced the president of the Central Asian country to resign.

Now people are scratching their heads over a $1 million international lobbying contract signed on behalf of Kyrgyzstan’s acting president — just days after he got out of jail — by an obscure Bishkek businessman with a self-professed former Israeli intelligence agent living in Canada.

Ari Ben-Menashe, who claims to have worked for Israeli intelligence in the 1970s and 1980s, registered as a foreign agent in Washington in early November 2020 to help Sapyr Japarov — who came to power in Kyrgyzstan after the failed elections and is now a leading presidential candidate — secure meetings with foreign officials and attract international investment to his impoverished country, U.S. lobbying documents show.

Ben-Menashe told RFE/RL he was tapped to help Kyrgyzstan by an acquaintance he met in Russia named Abdymanap Karchygaev, who says he is a successful businessman who heads Renaissance, a newly registered Kyrgyz agro-industrial firm.

The $1 million fee for Ben-Menashe’s services — which was fully paid by December 21, 2020, according to U.S. filings — was partially financed by Karchygaev’s friends in Russia, the Kyrgyz businessman said.

Karchygaev, who began negotiating the contract in September 2020 when Japarov was still serving a prison term for kidnapping, said he hoped the international lobbying effort would help attract $8 billion in aid and investment to Kyrgyzstan. If accomplished, the amount would exceed the country’s total foreign direct investment in the past 25 years, according to World Bank data.

“I had [aimed] to set up around 100 companies under the umbrella of the agro-industrial corporation, to bring back hundreds of Kyrgyz wandering around in Russia and create jobs,” Karchygaev told reporters in Bishkek on November 6, 2020. “Bearing in mind this idea, I contacted this consultancy company. I’ve lived in Russia for 10 years, therefore, these are my old acquaintances.”

Ben-Menashe told RFE/RL in an interview that he met with Japarov in his government office in Bishkek three times in October 2020 to discuss details of the lobbying deal before it was signed by Karchygaev in Japarov’s name.

The contract does not mention any preferential treatment for Karchygaev or his companies though it does seek to attract investment into Kyrgyzstan’s agricultural industry, which could potentially benefit the businessman.

Japarov first denied having met with Ben-Menashe and dismissed the deal as a bureaucratic mistake by a novice employee. He added that he could barely remember Karchygaev.

Japarov said Karchygaev was one of more than 100 investors that have come to his office since October 2020 to discuss investment possibilities.

He claimed that when Karchygaev then appealed to the nation’s investment promotion agency for help with his endeavor, a new employee “unknowingly” signed a letter and sent it to the Foreign Ministry.

Japarov’s office did not respond to an RFE/RL inquiry — after Ben-Menashe said he met with the then-prime minister — asking to confirm they had met and if he had given his approval for the deal.

Anna Massoglia, a researcher and foreign-lobbying expert at the Center for Responsive Politics in Washington, told RFE/RL that U.S. law does not prohibit an individual from hiring a lobbyist on behalf of another person as long as it is disclosed.

“It is not uncommon for individuals who are fugitives, subject to sanctions, or imprisoned to have another person acting as a proxy of sorts and listed as the foreign principal in [Foreign Agents Registration Act] filings,” she said.

Ben-Menashe is, according to the contract, supposed to arrange meetings for the Kyrgyz president with senior U.S. officials “in short order” to discuss improving relations and to obtain grants for technological development, fighting the coronavirus, agricultural investments, and debt-repayment assistance.

Furthermore, Ben-Menashe is to set up meetings for Japarov with Israeli Prime Minister Benjamin Netanyahu; attract investment from Saudi Arabia and the United Arab Emirates for highways, mines, and oil fields; and schedule meetings with officials in Riyadh and Abu Dhabi.

Ben-Menashe will have his work cut out for him on the investment goals.

Unlike its authoritarian neighbors in Central Asia, Kyrgyzstan routinely changes governments and has thrown out three presidents in 15 years. It is also beset with deep-rooted corruption.

But there are other hurdles to overcome in Ben-Menashe’s goal of attracting Middle East money for Kyrgyzstan’s natural resources industry, said Ellen Wald, a senior fellow with the Atlantic Council Global Energy Center and a Saudi expert.

Aramco and Adnoc, the national oil companies of Saudi Arabia and the U.A.E, respectively, have never done any exploration or production of upstream assets outside of their own countries, she told RFE/RL.

“Aramco has talked about investing in gas assets outside of the kingdom but Kyrgyzstan, a country that has no known oil or gas assets, would be a very questionable choice to initiate that process,” said Wald.

As for the effort to lobby the United States, it has already promised aid to Central Asia to fight COVID-19 and senior officials hold regular meetings with regional leaders through the C5+1 format.

Eric Stewart, a former Commerce Department deputy assistant secretary who has worked with Central Asian governments, told RFE/RL there are very few instances where it makes sense for a country to hire a lobbyist to get meetings in Washington.

“Only if there is something very specific [in which] they need help with securing something Pentagon related, for example. But to secure meetings — no,” he said.

Stewart, who is president of the American Central European Business Association, called the timing of the contract “terrible.”

The incoming Biden administration will need time to assemble its team and likely won’t focus on Central Asia until late in 2021, he said.

“It’s nothing against Kyrgyzstan, it’s an amazing country, they just aren’t a strategic or economic priority for the [United States]. They are too far away, too small, and too reliant on China and Russia. An Israeli-Canadian lobbyist won’t change their relevance and, in fact, some in the administration will be turned off by it or even less reluctant to schedule a meeting if there are middlemen involved,” he said.

The Kyrgyz parliament eventually named Japarov, 51, prime minister in the chaos that existed shortly after the government collapsed in the wake of street protests over the results of the October 4, 2020 parliamentary elections, in which many votes were alleged to have been bought.

He later stepped down as prime minister and as acting president in order to be able to stand for president in the January 10 election.

Japarov, who was released amid the protests from a Bishkek prison where he was serving a nearly 12-year term for kidnapping, is one of 18 candidates vying for the top post.

Kyrgyzstan is just the latest troubled country that Ben-Menashe has represented since setting up his Montreal-based firm Dickens & Madson Canada in 2001.

Ben-Menashe has stated in some of his FARA filings that he would lobby Russia as well as the United States on behalf of his clients, including Nguesso, Libya’s General National Council, and the tiny Venezuelan party. Russia has influence with all three countries.

Ben-Menashe was arrested by U.S. officials in 1989 on charges of trying to sell U.S.-made, military cargo planes to Iran, but was acquitted one year later.

His lawyer told the court that Ben-Menashe was a former intelligence operative who represented Israeli Prime Minister Yitzhak Shamir in an attempted arms-for-hostages deal, according to a 1990 report by The Washington Post.

But U.S. prosecutors said he was only a translator for Israeli military intelligence.

A congressional hearing that looked into arms transfers to Iran described Ben-Menashe as a talented liar, according to a 2004 report in The New York Times.

Todd Prince is a senior correspondent for RFE/RL based in Washington, D.C. He lived in Russia from 1999 to 2016, working as a reporter for Bloomberg News and an investment adviser for Merrill Lynch. He has traveled extensively around Russia, Ukraine, and Central Asia.