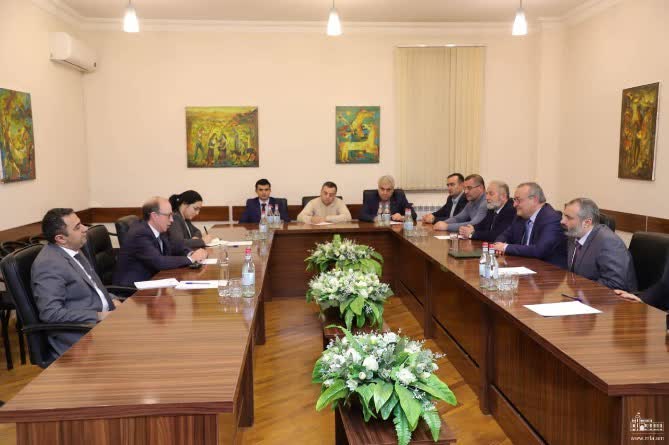 YEREVAN, January 6. /ARKA/. The recognition of the right of the people of Artsakh to self-determination and security, the de-occupation of those territories of Artsakh under the Azerbaijani occupation, the restoration and protection of the rights of the Armenians of Artsakh were underlined as the cornerstone of the political settlement of the conflict by Armenian Foreign Minister Ara Aivazian during a meeting with the Speaker of the Artsakh (Nagorno-Karabakh) National Assembly Artur Tovmasyan in Artsakh capital Stepanakert.

According to the Armenian Foreign Ministry, during the meeting the parties exchanged views on regional security, peace issues, problems faced by the Armenians of Artsakh in connection with the Turkish-Azerbaijani aggression, and steps taken to resolve them.

The parties discussed also the resumption of the peaceful settlement of the Nagorno-Karabakh conflict within the framework of the OSCE Minsk Group – the only format with an international mediation mandate.

Ayvazyan and Tovmasyan attached importance to the role of parliamentary diplomacy as a key platform for expanding cooperation between the two Armenian states and making it more effective. In this context, the sides especially emphasized the promotion of direct contacts and the continuation of traditional intensive mutual visits.

On November 9, the leaders of the Russia, Azerbaijan and Armenia signed a statement on the cessation of all hostilities in Artsakh. According to the document, the parties stopped at where they were at that time. The town of Shushi, the districts of Agdam, Kelbajar and Lachin were handed over to Azerbaijan, with the exception of a 5-kilometer corridor connecting Karabakh with Armenia.