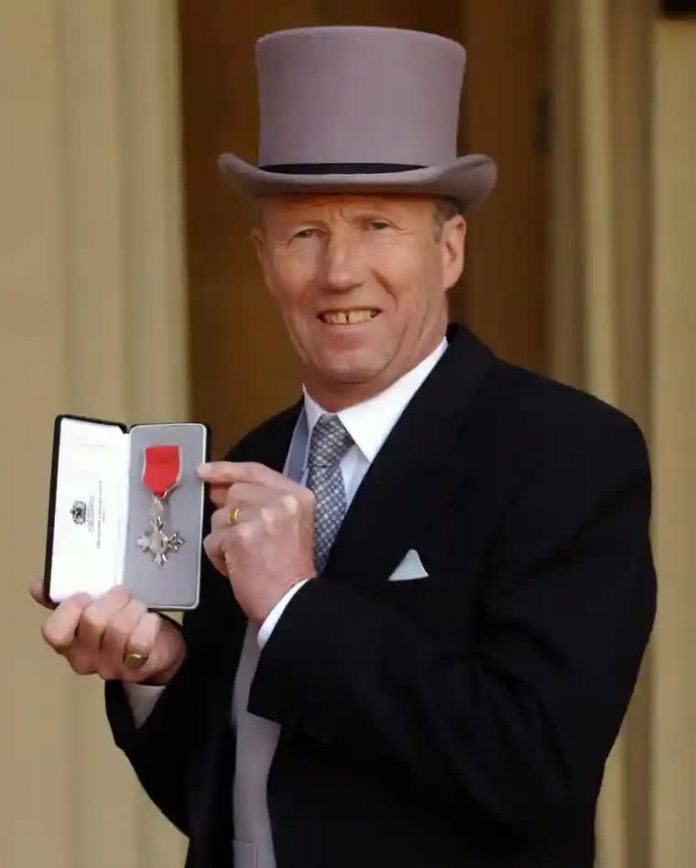 Manchester City’s Colin the King was the antithesis of the modern gated player. But he was the complete midfielder

Colin Bell was awarded an MBE in 2005. Photograph: Fiona Hanson/PA

The King is dead. RIP Colin Bell. He was nicknamed Nijinsky after the great racehorse because he’d run and run and never tire. But it could just as easily have been after the ballet dancer. To the rest of us he was simply Colin the King.

He strode through midfield like a colossus; a god – and the space invariably opened up in front of him. He didn’t do anything particularly tricky or fast, he just ran with the ball. Bell was the complete midfielder. He scored goals with his head, he scored tap-ins, he scored bangers from outside the area. He tackled, chased, closed-down, dribbled, crossed, headed, defended and passed beautifully. He was the complete midfielder. Colin won 48 England caps, and there would have been so many more if he’d not been injured in his prime.

He scored the greatest goal I ever saw, against Burnley. I think. From 40 yards out he wellied the ball, and it screamed into the top corner. I say I think. I never saw the goal again. The cameras weren’t there that day. So for me it will be the greatest old-fashioned goal, for ever framed in the mind’s eye.

We all wanted to play No 8 – Colin’s number. Of modern players, the way he ate up the turf was similar to Kevin De Bruyne. He was not as outrageously gifted as De Bruyne, but this was a different era. De Bruyne never had to play on the Baseball Ground. King Colin was mighty in the mud.

Bell, who came to City from Bury, was at Maine Road for the glory days Mk1 – that era in the late 1960s when City enjoyed phenomenal success without buying it (unless you count the £45,000 we paid to Bury for him). He was the totem of the City team that won every domestic trophy in a three-year period between 1968 and 1970, followed by the European Cup Winners’ Cup. He made so many goals (we didn’t call them assists back then) and could be relied on to knock in 14 or so goals in a 42-match season, sometimes more. He scored 142 goals in 481 for City – a phenomenal record, particularly back then, for a midfielder.

I started going to City in 1974, at the arse-end of the glory days. We won one more trophy, in 1976, the League Cup, but by then Colin was crippled – scythed down by Martin Buchan in a league Cup derby City won 4-0. It was one of the greatest nights of my life, and one of the worst. City fans of a certain vintage still replay that tackle in their head. We never forgave Buchan. Weeks turned into months, and still the King wasn’t back.

De Bruyne never had to play on the Baseball Ground. King Colin was mighty in the mud

Eventually, two years and 44 days after the injury, he returned against Newcastle United. It was Boxing Day 1977, and the ground was full. He came on as a substitute to the most sustained, emotional roar you ever heard at a football match. But he wasn’t the same Colin Bell. The knee was kaput. He could no longer do the thing for which he was famous – run and run, and eat up the turf. But he was still King Colin.

And he was for us. When we moved to the Etihad Stadium, one of the stands was named after him – unfortunately the Bell End never had the majestic resonance intended, so it was renamed the more sober Colin Bell Stand. When former players cited the greatest City players, they always named Bell. Even in the moneyed era when we could buy the best in the world. At the end of last season I interviewed Mike Summerbee, who played in the same team as Bell (two thirds of the famous Bell‑Summerbee‑Lee triumvirate) about the departure of David Silva. He said no City player has had Silva’s ability, but of course he had to compare him with Colin. And adore Silva as he did, I think I knew where his loyalty ultimately lay.

Colin was a rock star footballer. But what made him so special was that he was also the ultimate anti-rock star. He was gorgeous, almost iconically cool, but the hair was slightly too pudding basin to be George Best cool or Rodney Marsh cool. When George Best opened up a designer boutique with Summerbee, Bell opened up a restaurant with the equally unflashy Colin Waldron. Bell wasn’t above serving anybody a bit of grub.

There were no histrionics when he scored. He didn’t punch the air or do backflips, he simply raised his hands, turned around and got on with the game. When players tried to embrace him he virtually shooed them away. He’d done nothing special, he’d scored a goal, done the job that he was paid for. Bell wasn’t a superstar, he was a workman plying his trade.

When he retired he wasn’t interested in being a star commentator or the big I am. He simply left. On the rare occasion the TV cameras caught up with him, he seemed lost for words. King Colin was as un-regal as it gets – the antithesis of the modern gated superstar. He wasn’t even the boy next door. He was too shy for that. He was simply a quiet fella called Colin who happened to be a brilliant footballer. If ever there was a time to drink a drink a drink to Colin the king, it’s now.