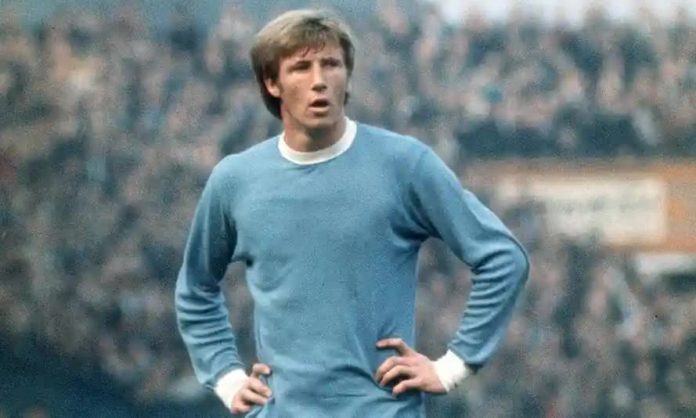 The Manchester City chairman, Khaldoon Al Mubarak, said of Colin Bell: ‘The passage of time does little to erase the memories of his genius.’ Photograph: PA

Tributes have been paid to Colin Bell, one of Manchester City’s greatest players, who has died aged 74 after a short illness.

The midfielder was known at City as the King of the Kippax, after one of the stands at the club’s former Maine Road stadium, and won 48 England caps from 1968 to 1975.

“He is widely regarded to be the finest City player of his generation, making 492 appearances and scoring 152 goals for the club during a 13-year stay,” said City, who specified Bell’s illness was not Covid-related. The club’s players are set to wear a retro No 8 shirt at the Carabao Cup semi-final at Manchester United on Wednesday.

A mark of Bell’s status at City is that the Etihad Stadium’s west stand is named after him. Mike Summerbee, a former City teammate, said: “Colin was a lovely, humble man. He was a huge star for Manchester City but you would never have known it. He was quiet, unassuming and I always believe he never knew how good he actually was. He was just the greatest footballer we have ever had. Kevin De Bruyne reminds me a lot of Colin in the way he plays and the way he is as a person. Even though I knew he’d been poorly for a while; I wasn’t expecting to lose him – it’s a complete shock.”

Bell was instrumental in the great City side that from 1968 to 1970 claimed a clean sweep of domestic honours of the championship, FA Cup and League Cup, and won the European Cup Winners’ Cup.

In 1967-68 Bell scored 14 times for Joe Mercer’s team to help the club become champions of England for only the second time, having two seasons before got the goal that clinched promotion.

Remembering the King of the Kippax 👑

Khaldoon al-Mubarak, the chairman, said: “The passage of time does little to erase the memories of his genius. The fact that we have a stand at the Etihad Stadium named after Colin speaks volumes about the importance of his contribution to this club … There is always the thought of what might have been if injury had not affected his career. Undoubtedly more trophies for City and far more than the 48 England caps to his name. Our club has lost a true great. Everyone’s thoughts and best wishes are with Colin’s family.”

Bell, born in Hesleden, County Durham, had started his career at Bury in 1963, where he became captain. Signed by Mercer for £45,500 on 16 March 1966 – on what was then transfer deadline day – the manager’s assistant, Malcolm Allison, had publicly described Bell as “hopeless” to try to ward off other interest. Bell made his City debut aged 20 three days later, scoring in a 2-1 win against Derby.

Also nicknamed “Nijinsky” because of fitness and stamina reminiscent of the champion racehorse, Bell was part of Alf Ramsey’s squad for the 1970 World Cup in Mexico.

Sir Bobby Charlton wrote in the foreword to Bell’s autobiography, published in 2005: “He was a great athlete with a great football brain and a very dedicated person. He didn’t need motivating; he did that himself. He had his own standards and you can’t fail to be impressed by his playing record. I got the opportunity to work with him occasionally when we were in the same squad for England and I was amazed by his strength and fitness. When a player with those assets has also got a football brain, and you ally that to pace and the other abilities he had, you have a really exceptional player.”

We’re deeply saddened by the news that Colin Bell, who won 48 caps for the #ThreeLions between 1968 and 1975, has passed away.

Bell was voted into the 1974-75 PFA Division One Team of the Year before a serious knee injury sustained in a tackle on Manchester United’s Martin Buchan in a League Cup win in November 1975 had a severe impact on his career.

Bell missed the 2-1 victory against Newcastle United in that season’s League Cup final at Wembley and all of the 1976-77. Although he did feature again for City, he left in 1979, briefly trying to revive his career by playing for the San Jose Earthquakes in the North American Soccer League, before retiring in 1980.

The City midfielder Phil Foden wrote on Twitter: “Extremely saddened to hear Colin Bell has passed away. The King Of Kippax was a true legend and someone I’ve grown up admiring. You’ll be sorely missed Nijinsky.”

The former City and England goalkeeper Joe Corrigan said: “He was irreplaceable – he was a once-in-a-generation talent.”