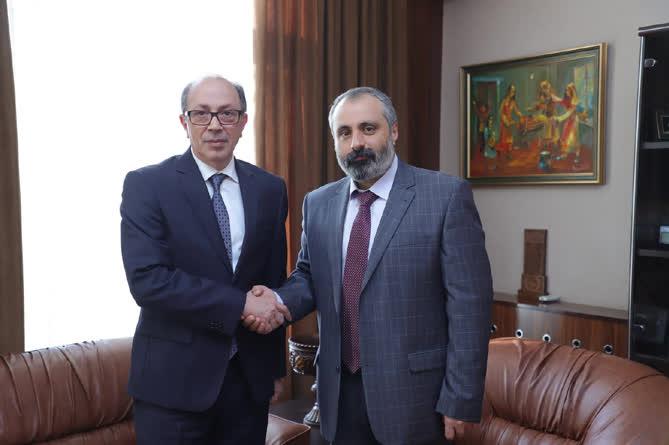 It said Minister Aivazian emphasized that today Artsakh and Armenia are facing issues which should be urgently addressed. In that sense, the close cooperation and coordination between the state bodies of the two countries, first of all Foreign Ministries, is more than imperative.

The Foreign Ministers discussed in detail a wide range of issues regarding the situation resulting from the Turkish-Azerbaijani aggression against the people of Artsakh, the implementation of provisions of the trilateral statement of November 9 and addressing the issues encountered by the Armenians of Artsakh. In this context, both sides stressed the priority of releasing and repatriating the prisoners of war and captured civilians, creating conditions for the return of displaced Armenians of Artsakh and ensuring their security, as well as overcoming the humanitarian, socio-economic consequences of the war. In this context, Foreign Ministers Aivazian and Babayan stressed the need to involve international specialized organizations on the ground in order to ensure comprehensive solutions.

Both sides stressed that the ceasefire established by the trilateral statement of November 9 provides a basis for discussions on the resumption of the Nagorno-Karabakh peace process within the framework of the OSCE-Minsk Group Co-Chairs as the only mediation format enjoying international mandate. The recognition of the right of the people of Artsakh to self-determination and security, the de-occupation of those territories of Artsakh under the Azerbaijani occupation, the restoration and protection of the rights of the Armenians of Artsakh were underlined as the cornerstone of the political settlement of the conflict.

The meeting continued in an expanded format with the participation of senior officials of the Ministry of Foreign Affairs of Artsakh. Minister Aivazian noted that now we have entered a new stage when the role and significance of diplomacy are of key importance. “At this stage, our cooperation is also of crucial significance. Therefore, our discussions will be more intensive and inclusive from now on. We have clear goals for addressing the issues we face, and all our resources and our full potential will be serving this purpose.”