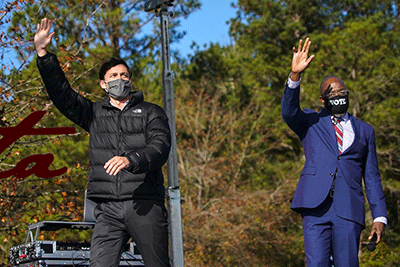 Victories by Jon Ossoff and the Rev. Raphael Warnock, which were overshadowed by violence from Trump supporters in Washington, will reshape the balance of power in Congress.

Jon Ossoff, left, and the Rev. Raphael Warnock promised a more robust response to the coronavirus pandemic and an expansion of Medicaid under the Affordable Care Act.Credit…Chang W. Lee/The New York Times

ATLANTA — Jon Ossoff completed a Democratic sweep of Georgia’s Senate runoffs on Wednesday, a striking political validation for his party in a state that has been challenging for Democrats for most of the last two decades.

The outcome prompted some Republicans to blame President Trump for dissuading the party’s voters from turning out in force with his false assertions that Georgia’s elections were rigged.

Mr. Ossoff, the 33-year-old head of a video production company, defeated David Perdue, a Republican who had just completed his first full term in office. Less than 12 hours earlier, the Rev. Raphael Warnock, the senior pastor at Ebenezer Baptist Church in Atlanta, unseated Senator Kelly Loeffler, becoming the first Black Democrat elected to the Senate from the South.

The victories were overshadowed on Wednesday by violence in Washington, where supporters of Mr. Trump stormed the Capitol. The police were forced to evacuate members of Congress as chaos and clashes erupted on the steps and Trump supporters broke through into the Capitol itself, with some entering the Senate chambers and offices in the building.

The results of the Georgia Senate races will reshape the balance of power in government. Though the Democrats will have the thinnest of advantages in the House and the Senate, where Vice President-elect Kamala Harris will break the 50-50 tie, they will control the committees as well as the legislation and nominations brought to the floor. That advantage will pave the way for at least some elements of Mr. Biden’s agenda.

“For the first time in six years, Democrats will operate a majority in the United States Senate — and that will be very good for the American people,” Senator Chuck Schumer of New York, who will become the new majority leader, said at a celebratory news conference in the Capitol before the violence erupted.

The Republicans’ losses in a state that Mr. Biden narrowly carried in November, but that still leans right, also amounted to a vivid illustration of the perils of embracing Mr. Trump. He put his diminished political capital on the line with an election-eve appearance in Northwest Georgia. And Mr. Perdue and Ms. Loeffler unwaveringly embraced the president throughout the runoff races even as he refused to acknowledge Mr. Biden’s victory, put forth baseless claims of voter fraud and brazenly demanded that Georgia state officials overturn his loss in the state.

The political fallout from Mr. Trump’s tenure is now clear: His single term in the White House will conclude with Republicans’ having lost the presidency, the House and the Senate on his watch.

On Wednesday Mr. Trump came under fire from members of both parties for inflaming passions among his loyalists that led to violence at the Capitol. But for weeks his erratic behavior in the aftermath of his electoral loss had worried Republican officials in Georgia and Washington, who feared that his unfounded claims of a rigged election would persuade Republican voters that their votes didn’t matter and deter them from turning out to support Mr. Perdue and Ms. Loeffler.

On Politics with Lisa Lerer: A guiding hand through the political news cycle, telling you what you really need to know.

A top state election official, Gabriel Sterling, on Wednesday laid the blame on Mr. Trump for the Republicans’ defeat, accusing the president of sparking “a civil war within a G.O.P. that needed to be united to get through a tough fight like this.”

Mr. Sterling, a former Republican political operative who worked on President George Bush’s re-election campaign in 1992, added that the president had spent more time attacking Republican officials in Georgia than he did Mr. Warnock and Mr. Ossoff.

The criticism from Republican quarters extended to Capitol Hill. “It turns out that telling the voters that the election was rigged is not a great way to turn out your voters,” Senator Mitt Romney of Utah said Wednesday when it was clear that the Democrats would win both races.

Mr. Warnock said he was honored to represent Georgians who needed help at a difficult time.

“Georgia is in such an incredible place when you think about the arc of our history,” he said in an interview on “Good Morning America.” “We are sending an African-American pastor of Ebenezer Baptist Church, where Martin Luther King Jr. served, and also Jon Ossoff, a young Jewish man, the son of an immigrant, to the U.S. Senate. This is the reversal of the old Southern strategy that sought to divide people. In this moment, we’ve got to bring people together in order to do the hard work.”

On Twitter on Wednesday afternoon, Mr. Ossoff thanked Mr. Biden for calling him that morning and said, “I’m looking forward to working with you to get financial relief directly to the people, beat Covid-19, and build a healthier, more prosperous, more just America for all.”

Mr. Ossoff and Mr. Warnock won thanks to a frenetic get-out-the-vote push that began immediately after the November election, when no candidate in either race claimed the majority needed to avoid a runoff. Driving turnout among liberals and Black voters in the early-voting period, Democrats built an insurmountable advantage going into election day.

They also won thanks to overwhelming margins in Georgia’s cities and decisive victories in the state’s once-Republican suburbs, and because of lackluster turnout on Tuesday in the rural counties that now make up the G.O.P. base.

The Republican candidates were handicapped by Mr. Trump’s refusal to acknowledge his defeat, which robbed them of what might have been their best argument for election: that they would be a check on liberal excesses in a government controlled by Democrats. Even before polls closed on Tuesday, senior Republican campaign officials were pinning the blame on the president, saying their polling testified to the power of the “check-and-balance” argument that the party had been unable to make because of Mr. Trump.

The runoffs were also a test of the political transformation taking place in a state that no longer resembles its Deep South neighbors. Formerly dominant Republicans have begun to see their advantage slip because of an increasingly diverse electorate and the changing preferences of suburban voters.

During an early-voting period that ended last week, more than three million Georgians cast their ballots, and turnout was heavy among African-Americans and in liberal bastions around Atlanta.

Mr. Perdue, 71, and Ms. Loeffler, 50, are both white millionaires who adopted more conservative policy positions on issues like gun rights and abortion. They also made the case to voters that their business success gave them real-world experience in handling economic matters.

Mr. Ossoff, 33, and Mr. Warnock, 51, were a more diverse team. They embraced the national Democratic Party, promising a more robust response to the coronavirus pandemic and an expansion of Medicaid under the Affordable Care Act.

Mr. Ossoff first emerged on the national stage in 2017, when he staged a losing bid for a House seat in a special election that was one of Democrats’ first opportunities to oppose Mr. Trump after his presidential victory. In that race and his successful Senate challenge, he proved to be a potent fund-raising force.

Mr. Warnock, a longtime preacher who raised huge sums himself, was also a relative political newcomer but leaned into his experience speaking from the pulpit about issues like police brutality and voter suppression.

The Republican side of the ticket struggled with coherent messaging after Mr. Trump’s narrow defeat in Georgia, with the president lashing out at two fellow Republicans, Gov. Brian Kemp and Secretary of State Brad Raffensperger, the secretary of state, when they refused to take steps to alter the presidential results. Mr. Perdue and Ms. Loeffler, both ardent defenders of the president, chose sides early, accusing Mr. Raffensperger of incompetence and calling on him to resign a few days after the general election.

As they voted on Tuesday in Buckhead, a wealthy neighborhood of Atlanta, Terri and Jim Orr said they didn’t trust Georgia’s elections system, but believed that failing to vote would be surrendering to what they see as a corrupt system. “I’m highly skeptical that our votes will make a difference,” said Ms. Orr, 59, adding that she believed the November election had been stolen from Mr. Trump but that she didn’t see a feasible path toward overturning the result at this point.

To the end, both Ms. Loeffler and Mr. Perdue hitched themselves to Mr. Trump, calculating that the party’s rank and file would sit out the runoffs if they distanced themselves from him — though on Wednesday night, after a mob stormed the Capitol, Ms. Loeffler reversed herself and said she would not object to Congress’s certification of Mr. Biden’s victory.

Richard Fausset is a correspondent based in Atlanta. He mainly writes about the American South, focusing on politics, culture, race, poverty and criminal justice. He previously worked at the Los Angeles Times, including as a foreign correspondent in Mexico City. @RichardFausset

Jonathan Martin is a national political correspondent. He has reported on a range of topics, including the 2016 presidential election and several state and congressional races, while also writing for Sports, Food and the Book Review. He is also a CNN political analyst. @jmartnyt

Stephanie Saul covers national politics. Since joining The Times in 2005, she has also written about the pharmaceutical industry, education and the illicit foreign money fueling Manhattan’s real estate boom. @stefsaul