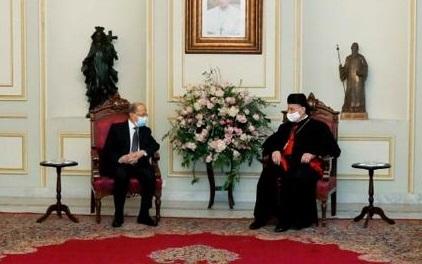 “Talks also tackled the measures that have been taken to combat the coronavirus pandemic with the lockdown that begins today and lasts until February 1,” NNA added.

After the meeting that lasted 45 minutes, Aoun spoke to reporters.

“We came here today to offer greetings to His Eminence, because circumstances prevented us from being here on Christmas Day,” the president said.

“We discussed the general situations… and I hope this meeting will be fruitful,” Aoun added.

Asked about the possibility of holding a Bkirki-sponsored “frankness meeting” with PM-designate Saad Hariri to “agree on a government without quotas,” the president said: “This is a possibility.”

The Presidency later denied that Aoun and Hariri were supposed to meet this morning in Bkirki but noted that al-Rahi proposed the idea in his meeting with the president.

LBCI television meanwhile quoted unnamed sources as saying that Aoun and Hariri have not opposed the idea of such a meeting but pointed out that there had been no agreement on holding it today.

“In their meeting today, Patriarch al-Rahi proposed to the President to bring him together with Hariri in a frankness meeting to agree on forming a government without quotas,” the sources added, noting that “Bkirki is still working on arranging the place and time of this meeting.”

Al-Jadeed TV for its reported that al-Rahi expressed Bkirki’s readiness to host Aoun and Hariri “if there is a problem in direct contact between them” but said there is no “initiative to bring them together under one roof.”