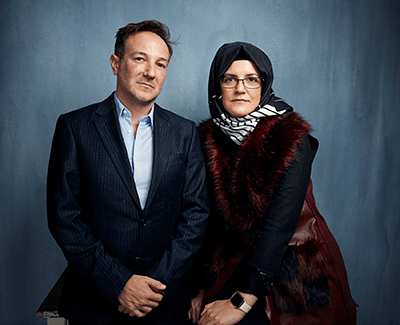 Director Bryan Fogel, left, and Hatice Cengiz pose for a portrait to promote “The Dissident,” a film about slain journalist Jamal Khashoggi, during the Sundance Film Festival in Park City, Utah on Jan 24, 2020. Photo: Taylor Jewell/Invision/AP

Even before “The Dissident” made its premiere at the Sundance Film Festival, director Bryan Fogel had a sense that his explosive Jamal Khashoggi documentary was going to be a tough sell.

The film was one of the most anticipated of last January’s Sundance. Fogel’s previous film, “Icarus,” about Russian doping in the Olympics, won the Academy Award for best documentary. “The Dissident” features audio recordings of Khashoggi’s murder, the participation of Khashoggi’s fiancé, Hatice Cengiz, and details on Saudi hacking efforts, including the infiltration of the cellphone of Amazon founder Jeff Bezos. The audience at Sundance included Hillary Clinton, Alec Baldwin and Reed Hastings, the Netflix chief executive.

At the screening, Fogel implored media companies not to be scared off. “In my dream of dreams, distributors will stand up to Saudi Arabia,” he said. Riding in an SUV to the film’s Sundance after-party, an upbeat Fogel said he was hopeful that Netflix, Amazon, HBO or others would step forward — anyone that could give the film a global platform for Khashoggi’s story, which plays as a lethal, real-life geopolitical thriller in “The Dissident.”

But the rough road ahead for “The Dissident” had already been signaled. None of the streamers — many of whom bought up Sundance’s top films — had asked for an advance look at “The Dissident” before the festival — something that could be expected for such a high-profile documentary from a filmmaker coming off an Oscar win.

“Many of the major streamers were actually there that day. Not their heads of content. Their CEOs. I would have hoped that would have led to: ‘We’re going to get behind this film.’ But it didn’t,” said Fogel speaking by Zoom from Los Angeles last month. “We didn’t have an offer for $1 let alone $1 million — let alone the $12 million paid for ‘Boys State,’ which is a wonderful film, but it’s about 17-year-old boys playing mock politics in Texas.”

“The Dissident,” set in a ruthlessly real political realm, will finally debut on-demand Friday. It was eventually acquired last spring, in a deal announced in September, by Briarcliff Entertainment, the independent distributor founded by Tom Ortenberg, the veteran film executive who distributed “Spotlight” and “Snowden” as chief executive of Open Road Films. After a two-week run in about 200 theaters (scaled down from 800 due to the pandemic), “The Dissident” will be available for rent on places like iTunes, Amazon and Roku.

But the cool reception from larger media companies to “The Dissident” — not because it wasn’t good (it has a 97% fresh Rotten Tomatoes rating from critics and a 99% rating from audiences ) or important but because it openly challenges the Saudi regime’s crackdown on free speech — raises questions about the future of political films on ever-larger and potentially increasingly risk-averse streaming services.

Netflix et al have played a vital role in exponentially growing audiences for documentaries. But in hunting globally for subscriber growth, media companies have sometimes capitulated to demands that border on censorship. In 2019, Netflix removed an episode of Hasan Minhaj’s “Patriot Act” that condemned the cover-up of Khashoggi’s murder after a Saudi complaint. Last month, The New York Times reported Apple chief executive Tim Cook squashed an Apple TV+ series in development about Gawker. Negative depictions of China, for both old-line Hollywood studios and streamers, is typically off the table.

“When there’s huge money at stake — business interest, shareholder accountability, what is going to make us vanilla and not cause us stress — is winning over,” Fogel says. “As these companies become bigger and bigger, we’re seeing the choices they make, including content, become less and less risky.”

For Fogel, the experience of “The Dissident” mirrors the silencing of Khashoggi. The film, financed by the Human Rights Foundation, details a plot to kill Khashoggi, a former Saudi insider turned Washington Post columnist who made moderate pleas for his native country to embrace freedom of speech and human rights. When picking up paperwork for his marriage to Hatice Cengiz at the Saudi consulate in Istanbul in October 2018, he was murdered and his body was sawed into pieces. Intelligence reports concluded that Saudi Crown Prince Mohammed bin Salman ordered the killing. Mohammed denied Saudi Arabia was behind the murder, then eventually granted it was carried out by agents of the Saudi government. Mohammed has claimed it wasn’t by his orders.

“The Dissident” includes interviews with Cengiz, Turkish authorities and United Nations investigators who deduced that Bezos, who owns the Washington Post, was hacked by a malicious file sent from the personal WhatsApp account of Mohammed. The same hacking scheme was allegedly used on the exiled activist Omar Abdulaziz, an associate of Khashoggi’s. “The Dissident” ultimately questions why countries and companies continue to do business with a country that resorts to such methods, jailing and killing dissidents.

“I hope this film will keep alive Jamal’s name and Jamal’s life and his values,” says Cengiz, speaking by phone from Istanbul. “I hope people will ask more and more and more.”

President Donald Trump has declined to blame Mohammed for the murder, and is quoted in Bob Woodward’s latest book bragging that he “saved” the crown prince. President-elect Joe Biden has signaled a tougher stance with Saudi Arabia. Cengiz has called on the CIA to declassify its investigation into the killing.

She has also carried on Khashoggi’s mission. “It wasn’t my choice but it’s my life,” she says. That American movie companies may have been scared away from “The Dissident,” she says, is “disappointing.”

“I could not imagine that they will not buy this film because this film is talking about a very important crime in history,” Cengiz says. “This film talks about someone who fought for some very important values. That’s why they killed him. So that’s why we’re fighting.”

In particular, Netflix’s shying away from “The Dissident” is “incredibly disappointing,” Fogel said. “Icarus” won Netflix its first Oscar. A spokesperson for Netflix declined to comment on the company passing on “The Dissident.” In November, the streamer inked a production deal with the Saudi studio Telfaz11 for eight movies.

But Fogel is also clear-eyed about the potential dangers associated with distributing “The Dissident,” musing about the possibility of Saudi hacking or a Middle East boycott of a distributor.

“Ultimately, those risk assessments took the place of whether or not their couple hundred million subscribers would like to see this film,” Fogel says. “It wasn’t just Netflix, but it was universal. What I think Hollywood learned from the Sony hack is that the risk of embarrassment is too high.”

Ortenberg, on the other hand, was comfortable with any headaches “The Dissident” might bring. “The movie speaks for itself,” Ortenberg says, speaking by phone from Los Angeles. He’s putting “The Dissident” forward for awards consideration.

“It’s too bad,” Ortenberg says of other studios’ apprehension. “I always saw the entertainment movie studios as leading the charge on important topics and not shying away from controversy but actually embracing challenges, and embracing the challenge of making movies about important subjects and treating them respectfully.”

Fogel sees a lack of international and corporate will to respond to human rights abuses that’s only growing worse, in Hollywood and elsewhere. Last week, Saudi state security court sentenced 31-year-old Loujiain Al-Hathloul to more than five years in prison for tweets that advocated women’s right to drive and argued against male guardianship regulations. Imprisoned since May 2018, she has said she was tortured and sexually assaulted by masked men during interrogations.

“I do believe that people in positions of power like that, with wealth and resources, if they’re not willing to stand up for human rights abuses like this, for what I consider the greater good of the planet, it becomes an increasingly scary place for us to live,” Fogel says. “We all become less safe.”