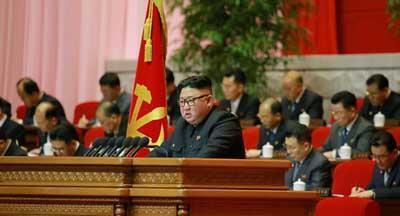 North Korea is currently holding the Workers’ Party congress, a major political event that was last organised nearly five years ago. Addressing loyal party members during the first day of the conference, the country’s leader Kim Jong-un admitted that his five-year economic plan had failed.

North Korea’s Supreme Leader Kim Jong-un signalled on Thursday that his country was moving to work on its foreign relations with the outside world but did not specify what countries would be prioritised in these exchanges, according to the the Korean Central News Agency, which quoted his remarks during the third day of the Workers’ Party congress.

According to the state media, Kim Jong-un “declared the general orientation and the policy stand of our party for comprehensively expanding and developing the external relations”.

The country’s troubled relations with South Korea were also reviewed by the DPRK’s head, KCNA noted, but no details were given about the steps or directions the North was going to take towards its neighbour. The media just noted that Kim discussed the issue of “affairs with South Korea as required by the prevailing situation and the changed times”.

The gleam of hope that relations between the two have been slightly improving had been crippled during the summer when Pyongyang blew up the Inter-Korean Liaison Office located north of the Korean Demilitarised Zone – something believed to be the deed of Kim Yo-jong, the younger sister of Mr. Kim.

Observers have hoped that the North Korea’s Supreme Leader will express his desire to mend the relations between the two during the congress that was convened for the first time in five years, or would at least signal his willingness to cooperate with Washington amid the upcoming Joe Biden administration, but no messages of this kind were outlined by the KCNA.

North Korea’s state media had previously dubbed Joe Biden a “rabid dog”, raising eyebrows among political leaders about the future relations between the two nations when the former vice president was finally confirmed to the presidential seat by the Electoral College in December.

No congratulatory message followed from Kim Jong-un, who had maintained (relatively) close ties with the United States during the Donald Trump administration as the two leaders met in Singapore in 2018 and then in February 2019 in Vietnam. In the summer of the same year, Trump also became the first sitting president of the US to cross the 1953 cease-fire line to visit North Korean soil. But the talks on North Korea’s denuclearisation have stalled.

During the second day of the inter-party’s conference, which is expected to run through Friday – Kim Jong-un’s designated birthday – the country’s leader had vowed to “reliably protect the security of the country and people and the peaceful environment … by placing the state defence capabilities on a much higher level, and put forth goals for realising it”.

It was just a day after he admitted in his opening speech to the congress that his country’s economic plan that had ended last year had fallen “short of the set objectives” in “almost all sectors”.