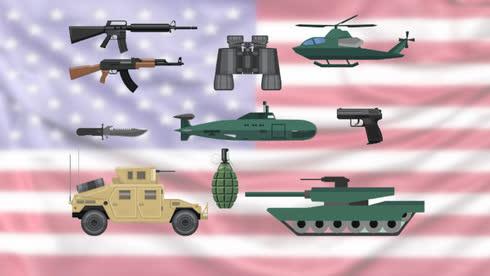 In-depth: The final year of the GOP president’s term in office has seen the sale of sophisticated fighter jets to the UAE, drones and munitions to Morocco and precision bombs to Saudi Arabia – moves that may irreversibly shape the Mideast

The $1 billion contract between Abu Dhabi and Saab Group (it split from the eponymous automobile firm in the 1990s) essentially extends a five-year pact signed in 2015 and includes two additional GlobalEye airborne surveillance systems, bringing the total number owned by the UAE to five.

“We are proud that the UAE continues to show great trust in Saab,” the company’s CEO Micael Johansson said. “It shows that Saab remains on the cutting edge regarding advanced technology.”

According to the manufacturer’s website, GlobalEye is a “multi-domain Airborne Early Warning & Control solution” and employs a mix of active and passive sensors that can detect and track long-range objects in the air, at sea and over land.

Tuesday’s deal follows the landmark sale of F-35 jets to the UAE by the U.S. Last month, the U.S. Senate failed to pass resolutions blocking the $23 billion agreement, signed after the Gulf state agreed to normalize relations with Israel in early August.

Several days later, the White House announced yet another arms deal, this time with Morocco, which had decided to upgrade its diplomatic relations with Israel the previous day. The $1 billion contract includes advanced U.S. drones and precision-guided munitions.

The flurry of weapon buys by Arab countries was capped last week with the State Department’s authorization of a relatively modest $290 million sale of 3,000 precision-guided bombs to Saudi Arabia, which will be added to the $500 million purchase of state-of-the-art air-to-ground armaments by Riyadh, announced two weeks earlier.

The shopping spree has picked up as the four-year term of President Donald Trump draws to a close, and may shape the Middle East in irreversible ways.

“The U.S. is the largest weapons exporter in the world, using every chance it gets to control other markets. Selling strategic arms like drones, air defense and other systems, beyond the financial benefits, allows it to exert political leverage on its clients,” says Ami Rojkes Dombe, a defense and technology analyst and editor at Israel Defense magazine.

“In a larger geopolitical context, these moves … are a response to Russian and Chinese expansion in the Middle East and Africa. These deals are a form of planting a flag in the Sahara and Persian Gulf by Washington,” he says.

“The Moroccan deal includes mostly drones and precision arms. These kinds of weapons allow the Moroccan army to combat the asymmetrical warfare currently waged by the Polisario Front,” the rebel movement looking to end the Moroccan presence in Western Sahara,” he says.

“This undoubtedly gives Rabat a leg up in this battle compared with neighboring Algeria, which relies on Russian munitions [and which is the main supporter of the Polisario Front],” he says.

“It will be interesting to see whether Moscow or Beijing answer with their own large attack drones.”

As for the latest sale of precision bombs to Riyadh, Dombe explains that the ongoing war in Yemen, where the Saudi-led collation of Arab states is combatting the Iran-backed Houthi movement, has demanded mostly aerial attacks, as Saudi forces have suffered significant defeats on the ground.

“The transaction between the UAE and Saab is similar,” he says. “The UAE is involved in conflicts with terror organizations in Libya, Yemen and other places, and also relies heavily on air raids and supplying local proxy forces. So broadening its aircraft fleet will allow it to gather more information, direct fighter jet strikes and gain an aerial foothold at specific interest points.”

Seth Binder, advocacy officer at the Project on Middle East Democracy, says that the UAE deals would have the greatest impact on the region.

“If [they] are finalized, the UAE would be the only other country in the region, besides Israel, to have the fifth-generation fighter jet,” he says, noting that Washington’s own State Department acknowledged concerns over the sale, sending a rare note to Congress on the matter.

“The sale of the F-35, in particular, has the potential to lead to a significant escalation of an arms race in the region, not even just with Iran trying to match capabilities, but with other US partners wanting the same advanced equipment,” Binder says.

Qatar has already made a formal request to purchase the stealth jets, a move Binder explains will put President-elect Joe Biden in “a difficult situation on whether to sell even more advanced jets to U.S. partners, further threatening Israel’s legally binding Qualitative Military Edge, or upsetting regional partners who only want what their neighbor has received.”

While analysts are in agreement that the incoming administration will take a wholly different approach to the issue of arming Gulf countries, Robert Kubinec, assistant professor of political science at New York University’s Abu Dhabi campus, does not expect these deals to stop altogether.

“There has been bipartisan U.S. support for military cooperation with Gulf states for a long time. Of course the Biden Administration will … take a different tack, but Biden isn’t a revolutionary when it comes to foreign policy… [As] vice president, he oversaw very large arms transfers to Saudi Arabia,” Kubinec says.

While the new president may attach “more strings … to these deals, … he’ll do his best to keep close alliances with Gulf states.”

Binder expects a more aggressive approach from the White House: “Not only do I expect the new administration to pull back from some of the most controversial … egregious arms deals, I expect [Biden] to review the ones the Trump Administration has recently pushed through during this lame-duck period,” he says.

As for the reasons behind the past few months’ splurge, despite their timing, the deals do not seem to be directly linked to heightened aggressions between Iran and the U.S.

“These sales are not the right equipment to deter Iran, since the more immediate threat is not a conventional war … but asymmetric, proxy wars,” Binder says, adding that “the lag time on delivery” for much of the weaponry means it will not be in the hands of U.S. partners “for years to come.”

Over the last two years of the Trump presidency, friction between Washington and Tehran has steadily increased, with the downing of an American drone near the Strait of Hormuz in June of 2019 serving as the most obvious crescendo.

“Saudi Arabia and the UAE have had ongoing relationships with the United States in terms of weapons transfers for a long time,” Kubinec says, citing former president Barack Obama’s multi-billion-dollar deal to deliver F-15s to Saudi Arabia back in 2012.

“These countries have been upgrading their capabilities in response to hostile threats around the region, not just Iran. I don’t think that weapons purchases are just being driven by current concerns over Iran’s military activity.”