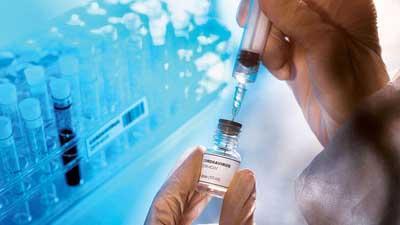 Turkey’s health minister announced late on Jan. 7 that an agreement for 50 million doses of a COVID-19 vaccine was finalized at the first meeting this year of the Science Committee.

“As of today [Thursday], we have finalized an agreement for 50 million doses of an inactive vaccine and received the first dispatch of 3 million doses,” Fahrettin Koca said in a press statement.

He noted that the committee revised the new supply plan in negotiations Thursday and signed an agreement for up to 30 million additional doses, with 4.5 million doses being certain.

Koca went on to say that negotiations for adenovirus-based vaccines developed in Russia and England are also ongoing.

The minister said the vaccine is sufficiently safe and effective according to the results of research and studies that Turkish scientists conducted.

The Urgent Use Approval process, which will be granted once the necessary tests are completed, has been started accordingly, he added.

Over 10,000 volunteers have received 17,700 doses of vaccine so far, and the results are still being observed, Koca said.

He said it was found out as a result of Phase 1 and 2 studies that the vaccine is safe to be applied to the elderly, people who are 60 or above, who were not included in the Phase 3 studies.

As the dispatches of the vaccines are received, citizens will be vaccinated according to the risk order determined by the Science Committee, Koca added.

The vaccination will consist of two doses, with the second dose to be applied 28 days after the first.

As new opportunities of production come into play, the BioNTech vaccine capacity allocated to Turkey will rise, said Koca on Jan. 7.

“We discussed the latest planning on the arrival of the BioNTech vaccine to our country with Prof. Dr. Ugur Sahin [the co-founder of BioNTech] and his team,” Koca said on Twitter.

“At our meeting, we also discussed how we can increase the number of vaccine doses allocated to us. As the new opportunities of production come into play, the [vaccine] capacity allocated to Turkey will increase,” he added.

WHO official thanks Turkey for following virus advice

“President [Recep Tayyip] Erdoğan’s activities and leadership are appreciated by all countries. I would like to congratulate you on your strong data and information delivery system,” Hans Kluge told Koca in a video conference.

During the meeting, Kluge and Koca discussed rising COVID-19 cases in Europe, mutations, the current situation in Turkey and vaccine studies.

“We have entered a period in which the number of cases is increasing in Europe and decreasing gradually in our country,” Koca said, adding that his country does not compromise on rapid testing, isolation, and contact tracking.

Noting that Turkey proceeds well on developing a national vaccine, Koca said Turkey has carried out all necessary work to delay the entrance of new mutation to the country.

“We have implemented some travel measures regarding the countries where the mutation is seen and quarantine measures for those coming from these countries,” Koca said.

Kluge said there is no indication that the mutation increases mortality rates or aggravates the disease. Contagiousness has increased, he said, adding that public health measures should be increased all over the world.