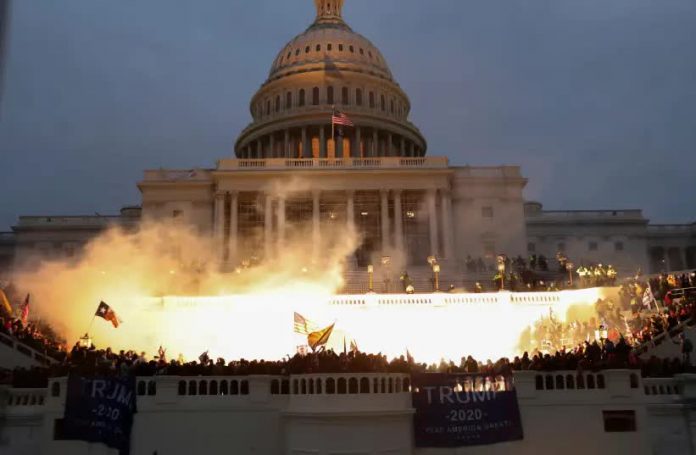 Israel now has to reckon with Trump’s legacy and his massive footprint in the Middle East.

An explosion caused by a police munition is seen while supporters of US President Donald Trump gather in front of the US Capitol Building in Washington
(photo credit: LEAH MILLIS/REUTERS)
Watching the riots in Washington from Israel, a couple of Israeli flags could be seen in the crowds. There were only a couple out of thousands of American flags, Confederate flags, Gadsden flags and others, but the Israeli flags were there, on the TV screens of people across the world watching the scene unfold on cable news.

The storming of the Capitol and the unfounded claims that the election was “stolen” from departing US President Donald Trump have nothing to do with Israel.

But Israel will have to reckon with Trump’s legacy and his massive footprint in the Middle East.

Looking back at the past four years, Trump checked off one policy after another on Israel’s wish list.

His administration recognized Jerusalem as Israel’s capital; it recognized Israeli sovereignty over the Golan Heights; and it put forward a peace plan between Israel and the Palestinians that almost looked like Prime Minister Benjamin Netanyahu wrote it himself.

The Trump administration declared settlements to not necessarily be illegal. It allowed Israelis born in Jerusalem to write “Israel” on their passports, and for products manufactured in Judea and Samaria to be labeled “made in Israel.”

The Trump administration left the deal that gave Iran a path to a nuclear bomb and replaced it with sanctions, sanctions, and more sanctions. And it convinced other countries in the region that view Iran as an adversary to sign historic peace agreements with Israel.

All along, Netanyahu and others in Israel made sure to lavish praise on the mercurial president, who is known to be susceptible to flattery.

Not that the compliments weren’t genuine. It’s clear from some of the political moves Netanyahu has picked up from Trump that the prime minister respected the way the president plays the political game.

And public opinion polls repeatedly showed that most Israelis approved of Trump. At one point polls even showed that in the whole world, Israel was the country that liked Trump best.

With Trump ending his presidency with his supporters violently attacking a symbol of American democracy, is the US-Israel relationship going to go down with him?

Israel’s leadership would be wise to start doing something it should have done months ago, when it was clear Joe Biden had won the presidential election, and start distancing itself from President Trump, even while standing its ground on his policies that made Israel stronger.

Netanyahu has stayed as effusive as ever when it comes to Trump. The reasoning behind doing so was clear. After all, former president Barack Obama took the damaging step of letting a UN Security Council resolution condemning Israel pass while he was a lame duck. When Trump still had two-and-a-half months left in office, there was time for him to help Israel or harm it. And in that time, we’ve seen more sanctions on Iran, plus Morocco joining the Abraham Accords.

But it’s a lot harder to explain Netanyahu’s praise for Trump that he issued on Thursday, immediately after condemning the violence on the Capitol. He didn’t have to condemn Trump outright while other leaders like UK Prime Minister Boris Johnson or French President Emmanuel Macron did not go that far, but he could have toned down the usual cheerleading.

For the past four years many people, including many American Jews, warned that Trump is an extremely divisive figure, and that Netanyahu should not hitch Israel’s wagon to him.

Still, it would have been a dereliction of duty had Netanyahu not done all he could to promote Israel’s interests. Netanyahu correctly saw the Trump administration as a unique opportunity to accomplish things he believes are good for Israel.

And it’s not just Netanyahu who thought Trump did good things for Israel, as polling shows. Recognition of Jerusalem and the Golan, concerns about the Iran deal, and support for the Abraham Accords are near-consensus opinions in Israel.

Some of those policies even enjoyed bipartisan support in the US. For example, President-elect Biden was one of the members of Congress who signed the original bill calling to move the US Embassy to Jerusalem, and he has said he would not move it back. Biden has also spoken favorably about the Abraham Accords.

The broad support for Israel’s normalization in the Middle East and consensus Israeli support for many of the steps taken in the past four years – not the president under whom they were taken – should be what Israel’s leadership emphasizes in order to preserve those gains.

Biden has professed his support for Israel and even spoken fondly of Netanyahu. But Israel has faced challenges in maintaining bipartisan support that preceded Trump and has only intensified, with the far Left of the Democratic Party calling to slash military aid and other policies that could cause significant harm to Israel. That wing of the party is still a minority, but with the Democrats winning control of both houses of Congress, Israel will likely have to contend with this challenge.

And that challenge will grow as Israel undertakes the difficult task of putting daylight between itself and Trump and rebuilding bipartisan support, especially with Trump ending his term as a latter-day Nero, playing on the fiddle of American divisions while the world burns around him.