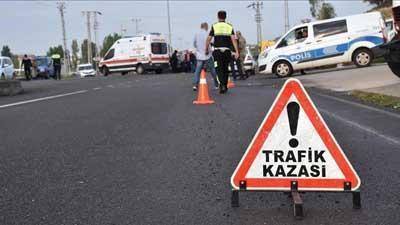 Nearly 2,200 people were killed and more than 228,000 others were injured in road accidents in 2020, declining from the previous year as vehicle and human mobility dropped due to COVID-19 related measures.

According to data from the traffic department of the General Directorate of Security, a total of 2,197 people lost their lives while 228,565 were injured in 365,000 road accidents.

In 2019, road accidents declined nearly 5 percent from the previous year to 1.1 million in which 5, 473 people were killed, the Turkish Statistical Institute (TÜİK) revealed earlier in 2020.

Turkey last year announced occasional curbs on intercity travel and frequently introduced curfews to slow the spread of the virus, which apparently helped reduce the number of road accidents.

The latest data from the traffic department showed that in December 2020, when weeknight curfews and full lockdowns on weekends were in place, 133 people died and more than 13,000 others were injured in some 25,000 accidents.

Some 895 accidents happened because of the road conditions while passengers were responsible for around 2,600 accidents.

A little more than 4,700 accidents occurred due to vehicle failure in 2020, according to the authority.

Nearly 17.6 million fines were issued in the whole of 2020 for traffic rule violations with violations committed by drivers standing at some 4 million. Some 6,200 pedestrians and 12,800 passengers were also fined for violating the traffic rules.