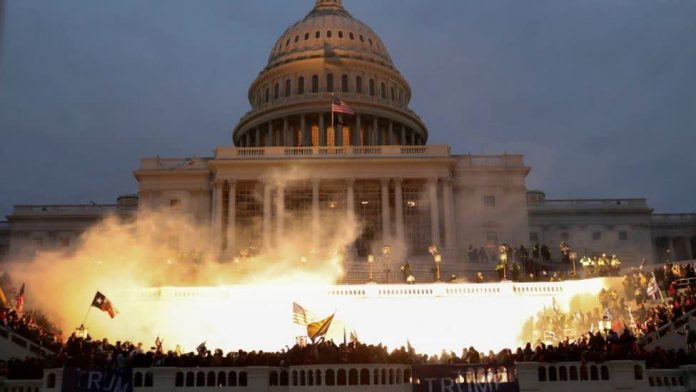 image captionHow will scenes like this affect US relations and the country’s image abroad?

Many foreign leaders – and especially Washington’s allies – will have watched the events this week on Capitol Hill with amazement and alarm.

Nato Secretary-General Jens Stoltenberg was one of the first to respond, tweeting “shocking scenes in Washington DC. The outcome of this democratic election must be respected”.

Who could ever have imagined such a comment, coming from the alliance’s top official addressed to its leading member state? It is the sort of thing you would expect Mr Stoltenberg to be sending to a Belarus or a Venezuela.

The episode says much about Washington’s standing in the world after four years of the Donald Trump presidency.

The US has haemorrhaged both influence and soft power.

It has pulled out of arms control agreements, the Iran nuclear deal, and a major climate accord. It has sought to reduce its military engagements overseas while offering little in the way of diplomatic alternatives.

Countries like Israel, Saudi Arabia and Turkey have all, to an extent, sought to provide for their own security, mindful that the US president’s attention span is limited. Indeed Donald Trump often appears to regard authoritarian leaders as more convivial hosts than the heads of government of many of his democratic allies.

The forces of attraction that made the country a model for aspiring democrats everywhere are tarnished, its fissures are there for all to see.

Today, as analyst Ian Bremmer notes: “The US is by far the most politically dysfunctional and divided of all the world’s advanced industrial democracies.”

This matters because, over recent years, the international system has clearly suffered from Mr Trump’s decision to pursue an America First policy. Authoritarians are on the march. China and Russia both feel their influence has been bolstered during the Trump years. The institutions of the liberal order – like Nato, the UN and many of its agencies – face varying degrees of crisis.

Cyber-attacks and so-called grey-zone operations – just short of the threshold of war – are becoming commonplace. The world faces acute crises like the pandemic and climate change and under Mr Trump’s watch, the US has simply not turned up for duty.

Let’s be clear here. This is not a call for US dominion over the globe. Often an expansive US foreign policy has been as much a part of the problem as part of any solution.

But US defence and security policy is not in a good place. The whole fabric of arms control agreements inherited from the Cold War years, from the INF treaty to Open Skies, is crumbling.

Indeed a last-ditch effort to renew the last accord constraining the US and Russian arsenals of strategic nuclear weapons – the New Start treaty – will be an early item on President-elect Joe Biden’s agenda.

Arms control is gaining greater importance as deadly new weapons systems like high-speed hypersonic missiles are developed, not to mention the growing militarisation of space. The west has to contend with the rise of a more assertive China and the return of a more aggressive Russia. So US involvement, leadership, call it what you will, is essential to even start grappling with the underlying issues involved.

This all poses huge problems for the incoming Biden administration. Washington’s enemies are on a high after the storming of the Capitol.

The new president arrives in power with China’s economy already rebounding from the pandemic whilst America’s Covid response is failing badly with massive death rates and uncertainty about the effectiveness of the vaccine roll-out. Indeed the pandemic is an issue that President Trump has largely ignored since his election defeat.

No wonder then that the Chinese President Xi Jinping is convinced that the crisis has demonstrated the superiority of his system.

Russia may be more of an irritant than a strategic competitor for Washington, but the disinformation and hacking operations that book-ended the Trump years are something radically new in scale and impact.

Joe Biden will be at the helm of an administration where many of its agencies are using computer systems that have been penetrated by the Russians. Nobody yet knows how deep or how permanent this intrusion might be.

Even among America’s friends the new administration’s course is unlikely to all be plain sailing. Of course the new president will be warmly welcomed by Washington’s allies abroad, especially within the EU and the G7 groupings. Others like the Saudis, the Turks and the Israelis are rapidly triangulating or re-adjusting their policies, seeking to enable a new dialogue with the Biden team.

But don’t expect any honeymoon for the new US administration to last long.

The divisions within the Atlantic alliance for example may be papered over fairly quickly. But Mr Biden is going to place demands on his European partners just as the Trump administration did. He will also want more defence spending and in addition concerted and tough policies towards Iran, China and Russia.

Creating these new policy coalitions is not going to be as easy as it might first appear. Look at the recent investment treaty between the European Union and Beijing, something many in the incoming Biden team hoped could be delayed. Is such a trade deal, they ask, really the way to respond to China’s suppression of democracy in Hong Kong, its hounding of the Uighurs, or its economic blackmail directed against Australia? It’s not exactly an auspicious start.

Policy differences, commercial ties and Europe’s own desire for a greater degree of strategic autonomy will all complicate relations with Washington. But beyond this there is another potent factor contributing to tension.

It’s all very well the Biden administration putting the rebuilding of alliances near the top of its foreign policy agenda but many of those allies are uncertain that Trumpism has gone for good.

It is not just shock at the storming of the Capitol. They fear that Mr Biden may provide only a four-year pause, after which a new form of Trumpism might return to power. Will some of Washington’s allies hedge their bets just in case?

This is a moment where US domestic policy has become perhaps the most critical element helping to guide its approach abroad. Indeed you might even say that all policy now in Biden’s America is domestic.

This is true in two critical senses. Rebuilding American democracy, making it a more equal and less febrile society, is essential to rebuilding “brand America” abroad. Only if its allies (and enemies) can be sure that the US is truly back on a different and consistent track can they have confidence in Washington’s leadership for the future.

But this centrality of domestic policy works both ways. If President-elect Biden is to have success abroad, he needs to win over his divided country to rally behind his foreign policy.

Take China for example. Mr Biden wants both to compete but also co-operate with Beijing where possible. Commercial policy here is almost more important than the traditional currency of strategy – warships or overseas bases. And the foundation of a successful commercial policy towards China can only be one that ordinary Americans see as serving their interests, that brings back jobs and a level playing field in international trade.

Restoring the state of the union may be the most important factor underpinning any success Mr Biden might have abroad.

Jonathan Marcus is a former BBC diplomatic and defence correspondent