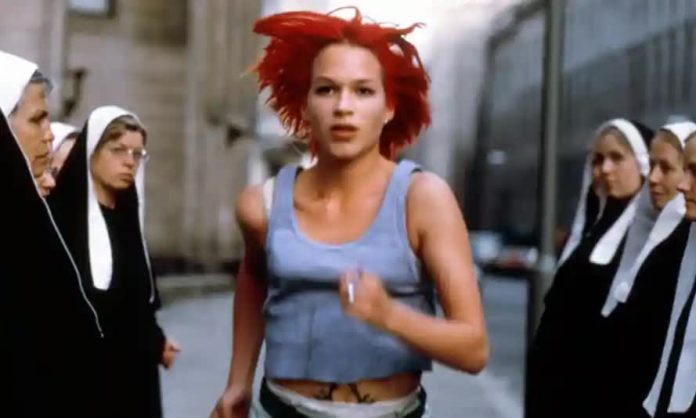 ‘I’m not a runner. Never was. Never will be’ … Franka Potente in the 1998 cult classic. Photograph: TCD/Prod.DB/Alamy

The  Guardian-Interviews by George Bass

I was in New York shooting a couple of films when I got this script called Lola Rennt (Lola Runs). I read it and thought: “This is cool – but kind of weird, too.” I flew back to Berlin, met the writer-director Tom Tykwer, and realised the energy I had felt on the page came from him.

The film required me to sprint across Berlin in a pair of Dr Martens. I have to get 100,000 Deutschmarks to my boyfriend Manni in 20 minutes, or he will be killed. We were shooting in August and the crew told me: “When we don’t see your feet, you can wear sneakers.” However, their footfall sounded different, so I just ran in boots all the time. I didn’t train – I probably smoked two packs a day back then – but I was young. And we wanted Lola to look like a real person, not an athlete. I’m not a runner. Never was. Never will be.

The only part of the shoot that worried me was where I’m running towards a moving truck with my eyes closed. A rope was lashed around me, supposedly for safety. By the time Tom and I made our next film, The Princess and the Warrior, we were in a relationship. Maybe that’s why he felt comfortable going further – risking me being run over by a truck, and throwing myself off a roof.

I had no idea the film would become so iconic. I only found out recently it’s even referenced by Bon Jovi in their It’s My Life video. We knew we’d made a movie that was cool, but we just thought it would be something for a cutting-edge satellite channel. We didn’t think it would have universal appeal.

I’ve drowned in The Bourne Supremacy and I’ve been lobotomised in American Horror Story, but watching myself being shot in Run Lola Run beats those. It’s one of the great perks of being an actor, though my dad didn’t enjoy the scene at all. I was recently bullied into showing the film to my daughters, who are seven and nine. They loved it, but were disappointed there wasn’t more blood when the explosive taped to mum’s chest goes off.

The moment I realised the film was a hit was at the Munich Filmfest. They showed it as the surprise midnight feature. The audience were super jacked-up from the previous film, Trainspotting, and when Lola ended, 800 people roared like they were at a soccer game. I went from goosebumps to crying. I’ll never forget that feeling.

Tom once said any sequel would follow the bum who Manni hands his pistol to at the end of the film. I’d definitely be up for a cameo, but I wouldn’t be running. It’s a different world today. I’d take an Uber.

I got the script just as the German film industry was trying to break away from its very serious, neo-realistic image, and the two Germanys were coming together after reunification. Tom Tykwer was part of the X-Filme collective and seemed to know everything about making movies. He broke down a lot of barriers. I come from a long line of theatre actors, but my family loved all of Lola’s nods to Hitchcock’s Vertigo: the spirals, the animation sequences, the portrait of Kim Novak in the casino scene. In fact, Lola marked the start of my mum’s second career as a movie actor: she plays the blind lady who lends me her phone card.

Tom threw everything into the pot: shooting on video, in black-and-white and anime. I’ve seen a lot of films that reference ours. The shoot was really cool. Tom is a big football fan and, as well as beginning the movie with a quote from coach Sepp Herberger referencing West Germany’s 1954 World Cup win, we got to play between takes on the street corner where I rob the supermarket. My character Manni quickly finds out he isn’t made for life as a mafia bagman, though.

For me, that’s the genius of Lola: it’s a feminist story. Nineties action movies were about the cool guy with a deep voice who saves the girl. This was one of the first features where you had a woman – a regular woman, not a 6ft Amazonian with diamond triceps – who’s just running to help her boyfriend. And she’s got red hair!