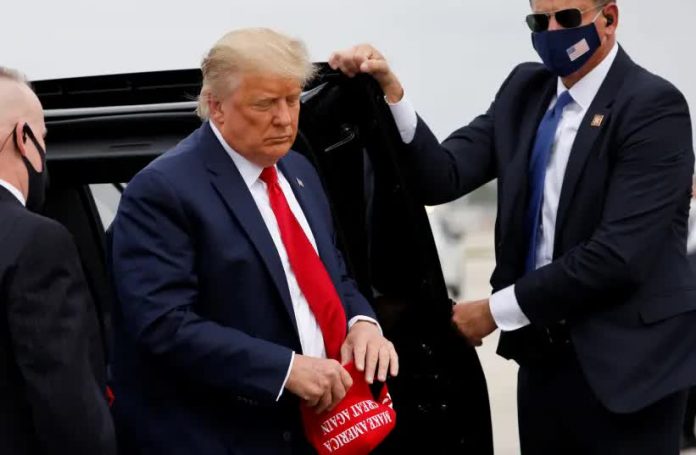 Democrats have secured at least 218 supporters to the move, virtually guaranteeing that the House will move to impeach the President.

U.S. President Donald Trump holds a ‘Make America Great Again’ cap while arriving to board Air Force One as he departs Florida for campaign travel to North Carolina, Pennsylvania, Michigan and Wisconsin at Miami International Airport in Miami, Florida, U.S., November 2, 2020
(photo credit: CARLOS BARRIA / REUTERS)
The US House of Representatives introduced the articles of impeachment against President Donald Trump on Monday.
How does the impeachment process work?
Members of the House can bring impeachment articles against the President for “high crime or misdemeanor,” and the House then considers these articles. In Trump’s case, Democratic Reps. David Cicilline, Ted Lieu, and Jamie Raskin introduced a single article for  “Incitement of insurrection.”
A simple majority of the 435 members of the House is required to impeach the President. According to Politico, Democrats have secured at least 218 supporters to the move, virtually guaranteeing that the House will move to impeach the President later this week.
What is the next step?
The next step would be a Senate trial, where the upper chamber would receive the articles of impeachment from the House and decide whether to convict or acquit the President. In order to remove the President from office, there a two-thirds senate majoority is required. As of now, only two Republican senators, Lisa Murkowski and Pat Toomey, have called for the president’s resignation. In addition, Senate Republican leader Mitch McConnell said that the Senate would not meet before January 19, all but guaranteeing that Trump will not be removed from office before the end of his term on January 20.
Could the House wait with sending the articles of impeachment?
Yes. Should Trump be impeached this week, the House could wait as long as 100 days to send the impeachment articles to the Senate and avoid delaying US President-elect Joe Biden’s most urgent agenda items, such as confirming his cabinet nominees during his first days in office, House Majority Whip Jim Clyburn (D-South Carolina) said on Sunday.
“We’ll take the vote that we should take in the House, and [House Speaker Nancy Pelosi] will make the determination as to when is the best time to get that vote and get the managers appointed and move that legislation over to the Senate,” he told CNN’s Jake Tapper on State of the Union.
“It just so happens that if it didn’t go over there for 100 days, it could,” Clyburn said. “Let’s give President-elect Biden the 100 days he needs to get his agenda off and running, and maybe we’ll send the articles sometime after that.”
Can Trump be disqualified from future public office?
Yes. This consequence of impeachment is specifically mentioned in the Constitution.
According to Reuters, two historical precedents, both involving federal judges, make clear that only a simple majority of the Senate is needed to disqualify Trump from holding future office. Legal experts said this lower standard means Democrats, who will take control of the Senate later in January, have a realistic chance of barring Trump from running for president in 2024 – a possibility he has discussed.
One complication with that plan, however, is that under Senate precedent a vote on disqualification is only held after a vote on whether to convict and remove from office.
Paul Campos, a law professor at the University of Colorado, told Reuters that he believed the Senate would have the authority to vote only on future disqualification. This scenario becomes more likely if Trump’s impeachment trial is still pending on January. 20, when his presidency ends, Campos said.
So Trump can be impeached after he has left office?
No court has yet definitively ruled on the matter, but many scholars believe the impeachment proceeding would not be rendered moot by Trump leaving office, since disqualification from future office would remain a potential penalty.
Has a US president ever been impeached twice?
No, but legal experts have said it is clearly constitutional for Congress to do so.
Trump was impeached by the Democratic-led House in December 2019 on charges of abuse of power and obstruction of Congress over his dealings with Ukraine about political rival Joe Biden, now President-elect. Trump was acquitted by the Republican-led Senate in February 2020.