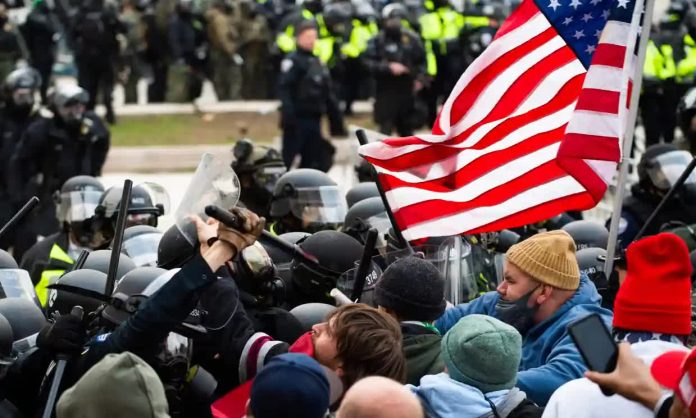 As they prepare for protests beginning this Sunday, disillusioned Donald Trump supporters will be drawn into even more extreme rightwing groups and could once again bring violence to rallies scheduled around Joe Biden’s inauguration, experts warn.

The move is likely to be exacerbated by the shuttering of rightwing social media website Parler and the closure of prominent conservative and rightwing accounts on Twitter – including that of Trump himself – on the grounds of inciting violence.

As fissures in the Trump movement widen in the wake of the deadly attack on the Capitol in Washington DC last week, neo-Nazi “accelerationists” are now openly plotting to draw hardcore Trumpists into their orbit.

Reports have detailed FBI warnings about possible violence at state capitols and in Washington in the run-up to Biden’s 20 January inauguration which will now take place amid increases in security and under the watchful eyes of thousands of National Guard troops.

ABC News reported an FBI bulletin has warned of armed protests “at all 50 state capitols”. The outlet said it had obtained an internal bulletin that detailed calls for the “storming” of state, local and federal courthouses and buildings.

There is a growing sense of paranoia among many rightwing activists amid arrests of scores of members of the pro-Trump mob that rampaged through the Capitol in a sustained assault that cost five lives.

On Monday news spread quickly in remaining far-right media channels that a social media user was claiming to have obtained all the publicly posted data that had ever been added to Parler, including material that users had deleted. Fears about the public release of materials users had posted falling into the hands of antifascist activists or law enforcement were posted on other channels, and other far-right friendly websites like 4chan.

Meanwhile, ex-members of the Parler service formed ad hoc groups on other platforms with lax or nonexistent moderation. On Telegram, a “Parler Lifeboat” group had over 15,000 members by Monday morning.

Many Trump supporters continued to express a desire for violent reprisals on those they saw as the president’s adversaries. On Monday morning, one wrote on Telegram that Democratic House speaker Nancy Pelosi “presents a clear and present danger to the safety of the nation. She is guilty of treason and should be removed from power immediately, by any means necessary.”

In the Parler Lifeboat channel, one user promised that Biden’s inauguration, and presidential term, would be watched by “8 million hunters AKA snipers”. Other telegram users were raising the prospect of protracted, armed struggle against the US government.

“The word I’d use right now is ‘confusion’,” said Alex Newhouse, Research Lead in the Center on Terrorism, Extremism, and Counterterrorism at the Middlebury Institute of International Studies, when asked in a telephone conversation about the current mood on the far right.

“There are already some signs that [neo-Nazi] accelerationist groups are trying to peel off militant Trumpers,” he said, referring to a movement which eschews any engagement with the political process, in favor of terroristic acts which will accelerate what they see as the inevitable decline of decadent liberal democracies.

Newhouse’s claims were borne out by the propaganda being pushed by accelerationist neo-Nazis on Telegram and other communications channels on Thursday and Friday. Various channels urged their followers to leverage Trump’s concession, the online crackdown, and Trump’s ejection from Twitter as opportunities to recruit angry Trumpists who had lost faith in the political process.

One neo-Nazi channel, which has thousands of subscribers, posted, “Every day the internet gets shut down further and further, every day the trap closes around us … All across the west nationalist networks are growing, find your tribe.”

The 17 January date is one focus of protest organizing by Trumpists, with plans for armed protests at state capitols around the country. In the Parler Lifeboat channel on Monday, one Trump supporter responded to a post on the Gateway Pundit site urging people to stay away from the rallies with defiance, writing, “I urge you all to take up arms and show up.”

A subsequent “Million Militia March” planned for inauguration day in Washington DC – which will come at the tail end of three days of protest in the capital, was being pointed to by other accelerationist channels as an opportunity for escalating tension and violence far and wide, while law enforcement were preoccupied with events in Washington DC.

One channel posted an advertisement for a “Million Militia March” scheduled for 20 January in the capital, with the caption: “The Trumpists will be keeping DC and the military busy on the 20th as you can see.”

Asked in a telephone conversation about such opportunism from extremist groups, Heidi Beirich, co-founder of the Global Project against Hate and Extremism, said of the Capitol fracas that “the closest analogy is what happened in Charlottesville,” referring to the Unite the Right Rally in August 2017.

That event, she said, was similar to the Capitol protest in bringing together members of militia groups, white nationalist organizations, groups such as the Proud Boys, and far-right social media personalities.

“Extremism began to be expressed in different ways,” including in the significant growth of accelerationist groups such as Atomwaffen Division and The Base, she said.

“I don’t want to be an alarmist,” Beirich said, “but I worry about a mass casualty event at the inauguration.”

In general, Beirich said, whatever Trump’s actions may be in the future, “I don’t see how you can embolden and energize this many people, in what has become an anti-democratic movement, without creating a strong possibility of violence.”