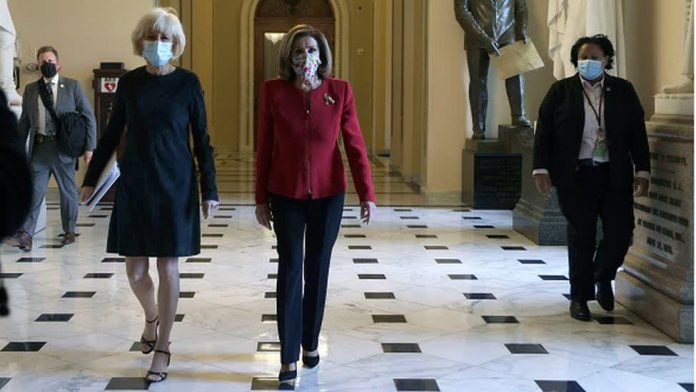 Democrats have introduced an article of impeachment against US President Donald Trump for his role in last week’s deadly invasion of the Capitol.

The article filed in the House on Monday accuses Mr Trump of “incitement of insurrection”.

Democrats say a vote on the article will go ahead in the House on Wednesday unless Vice-President Mike Pence invokes constitutional powers to remove Mr Trump from office.

Mr Pence is said to oppose the idea.

“The president represents an imminent threat to our constitution, our country and the American people, and he must be removed from office immediately,” Democratic House Speaker Nancy Pelosi said.

Calls for Mr Trump’s resignation, removal from office or impeachment have grown among Democrats and some Republicans in the days following the riots in Congress in which five people died.

The impeachment resolution accuses the president of encouraging his supporters to storm the Capitol building at a rally in which Mr Trump alleged, without evidence, that November’s presidential election was “stolen” from him.

The White House has dismissed the impeachment threat as “politically motivated”, but Mr Trump has made no public statements since he was banned from several social media platforms – including Twitter – on Friday.

He is due to leave office on 20 January, when Democrat Joe Biden will be sworn in as president. Mr Trump has said he will not attend Mr Biden’s swearing-in ceremony.

This is the second time Democrats have pursued impeachment against President Trump in the House of Representatives, the lower chamber of Congress.

In December 2019, the House impeached Mr Trump on charges of abuse of power and obstruction of Congress. But the Senate acquitted him on both charges in February 2020.

No US president has ever been impeached twice.

However, the prospect of an impeachment conviction is unlikely because of Mr Trump’s broad Republican support in the Senate.

What does the article of impeachment say?

The resolution drafted by three Democrats – who began writing it while under lockdown in the Capitol last Wednesday – consists of one article: “Incitement of insurrection”.

“Donald John Trump engaged in high Crimes and Misdemeanours by wilfully inciting violence against the Government of the United States,” the resolution reads.

The Article of Impeachment: Incitement to Insurrection, drafted by Rep @davidcicilline, @RepRaskin, me & @HouseJudiciary staff, has now been formally introduced at the House pro forma session today. https://t.co/Y6ntbSXF9G pic.twitter.com/MfB4CpqC6C

In the resolution, the lawmakers accuse the president of making statements that encouraged and resulted in “imminent lawless action at the Capitol”.

The resolution also says this was “consistent with his prior efforts to subvert and obstruct” the certification of President-elect Biden’s election win.

“He thereby betrayed his trust as President, to the manifest injury of the people of the United States,” the resolution says.

Impeachment allows Congress – the part of the US government that writes and brings in laws – to put presidents on trial.

Articles of impeachment are charges brought against a president by the House. If the House votes to pass them, proceedings move to the Senate, which holds a trial to decide whether to convict or not. There is no appeal against outcome.

An impeachment is a rare event and a political process, rather than a criminal one.

Mr Trump was the third US president to be impeached. The two others, Bill Clinton in 1999 and Andrew Johnson in 1868, were also left in office by the Senate.

President Richard Nixon resigned before he could be impeached in 1974, as political pressure built over the Watergate scandal.

What about the 25th Amendment?

On Monday, the Democrats presented a resolution to formally request that Mr Pence invoke the 25th Amendment of the US Constitution, which allows the vice-president and the cabinet to declare Mr Trump unfit for office.

The resolution urged Mr Pence to “declare what is obvious to a horrified Nation: That the president is unable to successfully discharge the duties and powers of his office”.

But, as expected, the resolution was not adopted by unanimous consent in the House, after Republican Alex Mooney of West Virginia objected to the request.

The House has now gone into recess until Tuesday morning, when the chamber is expected to vote on the resolution.

After the vote, the Democrats said they will give Mr Pence 24 hours to remove Mr Trump from office before they move toward impeachment.

“The president’s threat to America is urgent, and so too will be our action,” Speaker Pelosi said.

Although Mr Pence has appeared to distance himself from the president, there is no sign that the vice-president is prepared to invoke the amendment.

Impeachments are usually long, drawn-out affairs, involving investigations and hearings that can take weeks to conclude. This impeachment is expected to be much quicker.

Monday’s presentation of the impeachment article to the House paves the way for a vote to be held. A simple majority in favour of impeachment in the House would trigger a trial in the Senate.

However, an internal Senate memo says the soonest it could take up any articles of impeachment from the House would be on 19 January, the day before Mr Trump’s term expires.

The Senate is currently not in session, and all 100 senators would have to agree to change the schedule, which is highly unlikely.

Constitutional experts are split on whether impeachment can still proceed to a Senate trial when Mr Trump leaves office. But Democrats appear confident that the House can impeach Mr Trump and send the articles to the Senate for a trial at a later date.

On Sunday, Democratic House whip James Clyburn said the party may not send any articles to the Senate for trial until after Mr Biden’s first 100 days in office.

It’s a new week in Washington DC, but the fallout from Wednesday’s tragic events are just beginning.

With only eight days left of Mr Trump’s presidency, Democrats are very aware of the disruption an impeachment and a Senate trial would cause to the early days of Mr Biden’s administration.

That’s why there is talk of delaying Mr Trump’s Senate trial until after Mr Biden’s first 100 days in office.

At that point, the pressure to remove Mr Trump will be past, but other punishments – stripping him of the accommodations and privileges ex-presidents enjoy and prohibiting him from future federal office – still apply.

A year ago, Senate Republicans voted as a block to acquit the president of impeachment charges. This time, however, there may be some willing to side with Democrats to make sure that Trump, once out of power, never returns again.