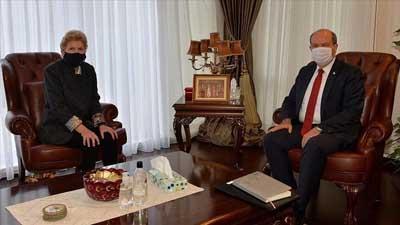 Ersin Tatar, president of the Turkish Republic of Northern Cyprus (TRNC), received the U.N. envoy to the island on Jan. 11.

After talks with Jane Hall Lute at the Presidential Palace in the capital Lefkoşa, Tatar expressed satisfaction with the meeting and looked to define any future negotiations over the divided island’s future.

Reiterating that 50 years of negotiations based on federalism had yielded no results, he said: “We underlined that we are seeking a resolution that would allow co-existence for two sovereign states on Cyprus.”

Pointing to Turkey’s key role for a resolution on Cyprus, he said Turkish Cypriots know the benefits of cooperation with Turkey.

“We co-administer the process with Turkey. We, Turkish Cypriots, are in full cooperation and consultation with Turkey,” he said.

“Turkish Foreign Minister Mevlut Cavusoglu has been involved in this for years and has mastered it.”

The island of Cyprus has been divided since 1974 when a Greek Cypriot coup was followed by violence against the island’s Turks and Turkey’s intervention as a guarantor power.

It has seen an on-and-off peace process in recent years, including a failed 2017 initiative in Switzerland under the auspices of guarantor countries Turkey, Greece, and the U.K. 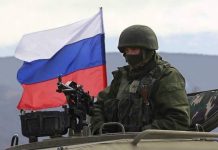