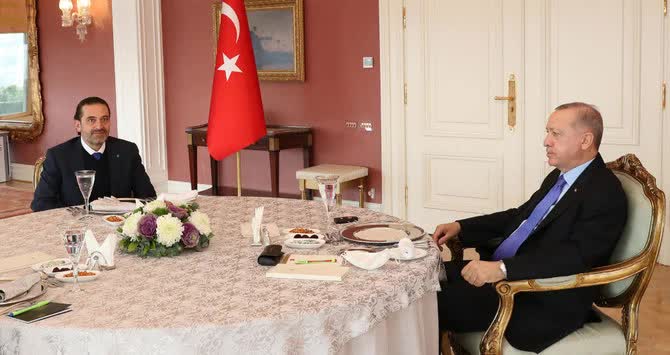 The main opposition party is calling on the Turkish government to be held accountable for the corruption allegations and has blamed the AKP for the slowest Internet bandwidth in the country due to the inefficient allocation of state resources. (AFP PHOTO /Turkish Presidential Press service)
Short Url-https://arab.news/vuhyp
Arab News

The cooperation avenues between the two countries, including boosting economic and business ties, were discussed during the friendly meeting, in which Hariri thanked Erdogan for his support to Turkish investments made in Lebanon.

Not everyone, however, was satisfied with this visit by the Lebanese prime minister, whose name has been often associated with corruption cases in Turkey, especially regarding the alleged involvement of the Hariri family in Turk Telekom, the country’s leading company in the field of information and communication technologies and once its most lucrative.

In his parliamentary speech on Monday, Faik Oztrak, spokesman of the main opposition party (CHP), reacted to the warm welcome of Hariri by Erdogan, saying, “How can you sit at the same table with this man who made billions of dollars without paying a penny on Telekom?”

The Turkish president’s Senior Adviser Yigit Bulut and Turkey’s Vice President Fuat Oktay were also members of the board of directors of Turk Telekom, who benefitted from high salaries during the privatization process. Oktay worked as the deputy chairman of the company for a long time.

“This family borrowed money from Turkish banks and paid the treasury’s privatization price for Telekom. Then, they plundered millions of dollars in dividend income from Turkey to Lebanon. He placed $3.5 billion in loan debt on our banks,” Oztrak said.

The criticisms of the opposition lawmaker served as a reminder of the long-hidden scandal involving the telecommunications company, which came under the spotlight in March 2013, when the pro-government daily Sabah revealed that Turk Telekom had secretly and illegally put its copper cables up for sale to transform them into cheaper fiber optic cables.

But this sale, which involved thousands of tons of scraped cables — worth up to $10 million dollars — was not officially made known to the stock market, despite the existence of two court rulings that prevented the Lebanese Hariri Group, owning 55 percent of the stakes in the company, from performing this sale, as it did not have any official approval from the Turkish Treasury.

This corruption went unnoticed for years, and no in-depth investigation was carried out, neither about the amount of copper sold nor about the buyers.

Turk Telekom was privatized in 2005, just three years after the ruling Justice and Development Party (AKP) came into power. Ojer Telecommunications, owned by the Hariri family, acquired its stakes for $6.5 billion by receiving loans from dozens of Turkish and international lenders.

In 2018, the Hariri family failed to pay an installment on Turkey’s once largest corporate loan of $4.75 billion, and its holdings were taken over by some 20 lenders, including several Turkish banks.

The main opposition party is calling on the Turkish government to be held accountable for the corruption allegations and has blamed the AKP for the slowest Internet bandwidth in the country due to the inefficient allocation of state resources.

Oztrak has been criticizing the government’s handling of the Turk Telekom issue since 2017. In another parliamentary question that he put forward in July 2017, Oztrak said that public resources were being used to compensate for the failed payment of the Hariri family in Turk Telekom, with public authorities closing their eyes to the ongoing corruption.