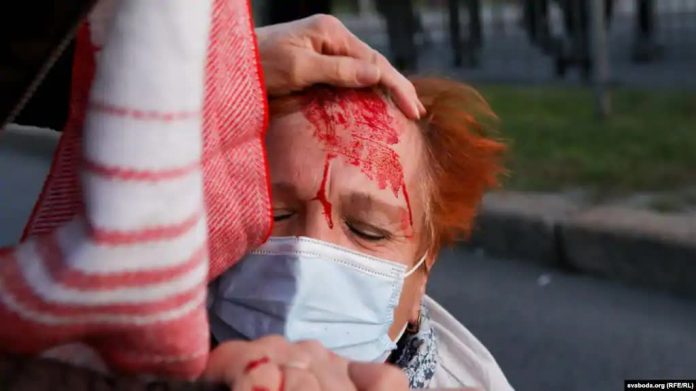 A protester was badly injured after being hit by riot police during a crackdown against an anti-government rally in Minsk on September 23 protesting Belarusian strongman Alyaksandr Lukashenka’s alleged landslide reelection.

Human Rights Watch (HRW) is calling on President-elect Joe Biden to reinforce the commitment of the United States to human rights after four years of shirking it during Donald Trump’s presidency, and to join broad coalitions that have emerged to stand up to “powerful actors” such as Russia and China that have been undermining the global human rights system.

Trump was “a disaster for human rights” both at home and abroad, HRW Executive Director Kenneth Roth wrote in an introduction to the New York-based watchdog’s annual report on human rights published on January 13.

According to Roth, the outgoing president “flouted legal obligations that allow people fearing for their lives to seek refuge, ripped migrant children from their parents, empowered white supremacists, acted to undermine the democratic process, and fomented hatred against racial and religious minorities,” among other things.

Trump also “cozied up to one friendly autocrat after another at the expense of their abused populations, promoted the sale of weapons to governments implicated in war crimes, and attacked or withdrew from key international initiatives to defend human rights, promote international justice, advance public health, and forestall climate change.”

This “destructive” combination eroded the credibility of the U.S. government when it spoke out against abuses in other countries, Roth said, adding: “Condemnations of Venezuela, Cuba, or Iran rang hollow when parallel praise was bestowed on Russia, Egypt, Saudi Arabia, or Israel.”

But as the Trump administration “largely abandoned” the protection of human rights abroad and “powerful actors such as China, Russia, and Egypt sought to undermine the global human rights system,” other governments stepped forward to its defense, he said.

After Biden’s inauguration on January 20, the U.S. government should “seek to join, not supplant” these collective efforts by a range of Western countries, Latin American democracies, and a growing number of Muslim-majority states.

Biden should also “seek to reframe the U.S. public’s appreciation of human rights so the U.S. commitment becomes entrenched in a way that is not so easily reversed by his successors.”

According to HRW’s annual World Report 2021, which summarizes last year’s human rights situation in nearly 100 countries and territories worldwide, the Chinese government’s authoritarianism “was on full display” in 2020.

Repression deepened across the country, with the government imposing a “draconian” national-security law in Hong Kong and arbitrarily detaining Muslims in the northwestern Xinjiang region on the basis of their identity, while others are subjected to “forced labor, mass surveillance, and political indoctrination.”

In Russia, HRW said the authorities used the coronavirus pandemic as a “pretext…to restrict human rights in many areas, and to introduce new restrictions, especially over privacy rights.”

Following a “controversial” referendum on constitutional changes, a crackdown was launched on dissenting voices, with “new, politically motivated prosecutions and raids on the homes and offices of political and civic activists and organizations.”

The situation wasn’t much better in neighboring Belarus, where HRW said thousands were arbitrarily detained and hundreds were subjected to torture and other ill-treatment as strongman Alyaksandr Lukashenka faced an unprecedented wave of protests following a contested presidential election in August.

“In many cases they detained, beat, fined, or deported journalists who covered the protests and stripped them of their accreditation,” HRW said. “They temporarily blocked dozens of websites and, during several days, severely restricted access to the Internet.”

According to the watchdog, the armed conflict in eastern Ukraine “continued to take a high toll on civilians, from threatening their physical safety to limiting access to food, medicines, adequate housing, and schools.”

Travel restrictions imposed by Russia-backed separatists and Ukrainian authorities in response to the coronavirus pandemic exacerbated hardship for civilians and drove them “deeper into poverty.”

In the Balkan region, HRW said serious human rights concerns remained in Bosnia-Herzegovina over “ethnic divisions, discrimination, and the rights of minorities and asylum seekers,” while “pressure” on media professionals continued.

There was “limited” improvement in protections of human rights in Serbia, where journalists “faced threats, violence, and intimidation, and those responsible are rarely held to account.”

Elsewhere in Europe, the government in EU member Hungary continued “its attacks on rule of law and democratic institutions” and “interfered with independent media and academia, launched an assault on members of the lesbian, gay, bisexual, and transgender (LGBT) community, and undermined women’s rights.”

HRW said Iranian authorities continued to crack down on dissent, including “through excessive and lethal force against protesters and reported abuse and torture in detention,” while U.S. sanctions “impacted Iranians’ access to essential medicines and harmed their right to health.”

In neighboring Pakistan, the government “harassed and at times prosecuted human rights defenders, lawyers, and journalists for criticizing government officials and policies,” while also cracking down on members and supporters of opposition political parties.

HRW noted that fighting between Afghan government forces, the Taliban, and other armed groups caused nearly 6,000 civilian casualties in the first nine months of the year.

The Afghan government “failed to prosecute senior officials responsible for sexual assault, torture, and killing civilians,” while “threats to journalists by both the Taliban and government officials continued.”

In the South Caucasus, six weeks of fighting over the breakaway Nagorno-Karabakh region dominated events in both Azerbaijan and Armenia.

HRW said all parties to the conflict committed violations of international humanitarian law, including by using banned cluster munitions.

In Central Asia, critics of the Kazakh government faced “harassment and prosecution, and free speech was suppressed.”

Kyrgyz authorities “misused” lockdown measures imposed in response to the coronavirus epidemic to “obstruct the work of journalists and lawyers,” and parliament “advanced several problematic draft laws including an overly broad law penalizing manipulation of information.”

The government also “severely” restricted freedom of expression, association, assembly, and religion, including through heavy censorship of the Internet.

Citing reports of torture and ill-treatment in prisons, HRW said journalists and activists were persecuted, independent rights groups were denied registration, and forced labor was not eliminated.

Turkmenistan experienced “cascading social and economic crises as the government recklessly denied and mismanaged” the COVID-19 epidemic in the country, leading to “severe shortages” of affordable food.