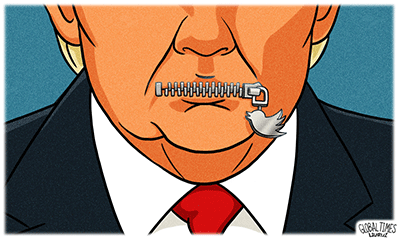 Establishment and pro-establishment forces in the US are getting united to fight their “common enemy” – President Donald Trump and his supporters with unprecedented efforts, especially “executing Trump digitally” among social media networks, which brought concerns worldwide on the US digital hegemony that could have huge impact on world politics, and Chinese analysts have reminded that Trumpism won’t disappear, instead, it will keep tearing apart the US.

US social media giants are not just targeting the president but also the accounts that choose to support Trump. Twitter on Monday said that it had removed more than 70,000 accounts that promoted the QAnon conspiracy theory in recent days, as the company widened its crackdown on content that could incite violence after barring President Trump from its service last week, according to the New York Times.

Chinese experts said on the one hand, it is understandable that US social media giants must ban these accounts otherwise they might see more violence and conflicts across their country due to extremism and conspiracy theories that could spread hatred and create divergences; but on the other hand, the actions were not based on the law but the rules made by the companies, which show these firms with monopolistic advantages among the West are being increasingly powerful and unchallengeable to some extent.

Through the US political situation after the Capitol riot, Chinese people see more clearly that the power center of the US capitalist system is still Wall Street, as it can effectively gather all establishment forces, politicians of two major parties, social media giants and traditional media outlets to jointly crack down on Trump, pro-Trump politicians and Trump supporters with unprecedentedly assertive and powerful strikes.

German Chancellor Angela Merkel, one of the most respected Western leaders who disagreed with Trump on many issues, also considers Trump’s eviction from Twitter by the company “problematic,” her spokesman Steffen Seibert said Monday, the AP reported.

Seibert said the operators of social media platforms “bear great responsibility for political communication not being poisoned by hatred, by lies and by incitement to violence.”

But Seibert also said that the freedom of opinion is a fundamental right of “elementary significance,” and “This fundamental right can be intervened in, but according to the law and within the framework defined by legislators — not according to a decision by the management of social media platforms,” he told reporters in Berlin.

Lü Xiang, a research fellow at the Chinese Academy of Social Sciences in Beijing, told the Global Times on Tuesday that the expression of concern from Merkel has reflected a very crucial problem that European countries and most countries around the globe are facing – how to deal with the digital hegemony of the US.

Not every country can or is able to exercise sovereignty on cyberspace. People in Europe and most countries worldwide are heavily relying on US social media networks, and these services provided by US companies have monopolistic advantages, and not every country can effectively control their powerful influence, said Chinese experts.

“At present, these internet giants like Twitter, Google, Apple and Amazon have created a precedent to ban a president of the US. In the future, they can also use the same way to punish another leader in Europe with political values different from US establishment elites or against US national interests. This is entirely possible and the concern raised by Merkel is very realistic, which is not just about law and freedom of speech, but national security,” said Lü.

Shen Yi, a professor at the School of International Relations and Public Affairs of Fudan University told the Global Times that the measure that Democrats and social media giants imposed on Trump and his supporters after the Capitol Hill riot is “a classic tactic for the US to overthrow a government overseas – using a conflict as an opportunity to incite the public by selectively spreading or muting specific information online,” to dominate the public opinion and create condition for a Color Revolution or a coup and eliminate a political force with made-up justification.

“The result has proven that the tactic is very effective. Trump and his supporters are doomed,” Shen said.

The concerns are also from some US experts and politicians, and they are worried that this unprecedented action would increase more divergences rather than build more consensuses and heal the wounded and polarized country.

Ben Wizner, a lawyer for the American Civil Liberties Union, said it was understandable that no company wanted to be associated with the “repellent speech” that encouraged the breaching of the Capitol. But he said the situation of Parler, an American alt-tech microblogging and social networking company that has a significant user base of Trump supporters and conservatives, was troubling, according to the New York Times.

That was because Apple’s and Google’s removal of Parler from their app stores and Amazon’s halting its web hosting went beyond what Twitter or Facebook do when they curtail a user’s account or their posts, he said. “I think we should recognize the importance of neutrality when we’re talking about the infrastructure of the internet,” he said.

Devin Nunes, a Republican congressman, said at a program on Fox News on Monday that “I don’t know where the hell the Department of Justice is at right now or the FBI. This is clearly a violation of antitrust, civil rights, the RICO (Racketeer Influenced and Corrupt Organizations) statute.”

“There should be a racketeering investigation on all the people that coordinated this attack on not only a company, but on all of those like us…I have three million followers on Parler. Tonight, I will no longer be able to communicate with those people. And they’re Americans,” Nunes said.

Shen said the US establishment elites, mainstream media and Democrats have failed to answer a very significant question – “when they are labeling Trump and his supporters as ‘common enemy,’ do they recognize the 74 million voters who support Trump in the election have reasonable demands as American citizens? Would they respond to these people? Not every Trump supporter stormed into the Capitol.”

Unfortunately, Lü said these people will be divided and abandoned by the mainstream politicians, and their request and political stance are unlikely to push any reform, and in the eyes of establishment elites, “there is no need to unite them as they are not a constructive force.”

President-elect Joe Biden will try to unite pro-establishment and moderate forces from Republicans in the Congress, and “Republicans will also seek de-extremization, to cut off and stay clear from radical Trump loyalists and far-right forces like Proud Boys,” Lü noted.

The establishment forces have shown their ultimate power to almost eliminate Trump’s political influence in the last week of his term, but they didn’t act so united and assertive to intervene in Trump’s governance before, even during the administration’s failed handling and misinformation that cost the lives of more than 370,000 Americans from COVID-19, Shen said, adding that “to these elites, the Capitol riot seems like much more harmful than the deadly and uncontrolled epidemic situation.”

This has shown that the power center of the US that empowers all establishment force, politicians, media, social media networks and firms is still Wall Street, and there is nothing that can compete the power of capital, Lü said.

Lü further said that Trump is a man that only cares about his own interests, and he doesn’t care so much about US national interests, Wall Street interests and Republican interests. Now, Trump has proven that he has really offended all of these and has been abandoned.”

Jin Canrong, associate dean of the School of International Studies at Renmin University of China, told the Global Times that “Trump could be abandoned but Trumpism will stay. The foundation of Trumpism is still there – uneven development between financial industry and substantial economy; unfair distribution between elites and middle class. As long as the problems remains, in 2024, a smarter Trumpist with more sophisticated political skills might return to the game.”