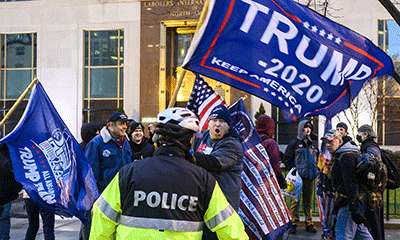 Pro-Trump supporters stand behind police as they argue with counter protesters during a confrontation near Black Lives Matter plaza in Washington, DC on Tuesday, on the eve of a rally of supporters of US President Donald Trump to protest the upcoming certification of Joe Biden’s Electoral College as president. Photo: AFP

The US is lowering its flag at half mast until Wednesday to honor two police officers. One died while on duty during the US Capitol riots, and the other died by suicide. In a statement issued by President Donald Trump, this was a sign of respect for “all Capitol Police Officers and law enforcement” across the country.

Some observers asked, what about the US citizens who lost their lives during the protests? Is the move also a sign to proclaim what they had pursued was fake democracy while law enforcement which pulled the trigger on them represents the sole justice? If so, it is hard to digest US condemnation and sanctions against Hong Kong police over the past year. The lowered flags seem just like a slap in the face of the US.

The ways US government officials, media outlets and elites describe the Capitol riots and Hong Kong protests are poles apart.

During the months-long protests in Hong Kong in 2019, radical protesters once broke into the city’s Legislative Council, and ransacked the main chamber and smashed facilities. In later clashes, they tossed toxic liquid and powder at police, and even bit off one police officer’s finger and stabbed another. Some radical Hong Kong protesters were more violent than those mobs in Washington. However, some US politicians never ceased pointing fingers at Hong Kong police, putting the names of Hong Kong officials and police, who did their utmost to maintain law and order, on US sanctions lists.

Hong Kong police had exercised restraint so no protester lost their lives. However, in Washington, where the protests were less violent, there were already four civilian deaths. Some Chinese netizens sighed, noting Hong Kong police were too merciful on local rioters, and suggested they follow the example of US law enforcement.

When the US feels shocked about the Capitol riots, it might as well take a look at what it has been inciting elsewhere – inflaming local residents to attack their political framework, not only in Hong Kong, but also in numerous places worldwide, and calling their moves democratic and righteous.

Eventually, after being advocated for so long, such an absurd value is absorbed by the US’ own people who believe they are entitled to do anything in the name of the so-called democracy. What Washington is pleased to see in Tunis, Kiev and Hong Kong is now occurring in US politicians’ workplace, allowing the world to witness how US double standards backfire.

Before the US pretends to be on the side of the angels, it needs to explain why the Hong Kong turmoil was “a beautiful sight to behold” while the same thing in Washington is unacceptable; why governments elsewhere had better not intervene in such protests or they would be labeled as “tyranny,” yet the same thing in the US must be removed by force immediately with police being honored with a lowered flag. Whom does the US think it can still convince by such contradictory logic?

Thanks to the Capitol riots, the halo of US democracy is crumbling. The blood and mess on the US Capitol Hill grounds have told the world that the so-called democracy, freedom, human rights and the rule of law in the US are merely tools. These concepts can be dressed, or even defined, in any way by capitalists as they like.

During the Capitol riots, a veteran who served 14 years in the US military died after being shot in the chest. Few politicians mourned her. Yet the country is lowering flags for law enforcement who aimed their guns against – what the West likes to call – democratic fighters. How ironic is that.

What’s even more ridiculous is the official Twitter account of the US mission in China on Monday expressed “grave concerns” for the 55 anti-government figures who were arrested in Hong Kong when the US itself is making large-scale arrests of Capitol protesters. Perhaps it’s time to call on Washington to respect the human rights and freedom of Americans.

Playing double standards won’t bring any cure to the US, but will make sure the next slap in its face is louder.