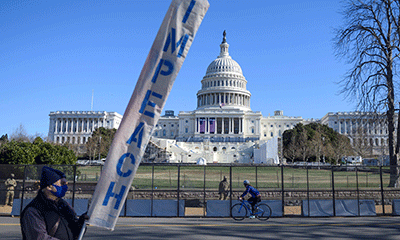 A protester carries a sign calling for Congress to impeach US President Donald Trump, near Washington, DC on Sunday. Trump faced fresh calls Sunday from some members of his own party to resign over the violent incursion into the US Capitol, as the threat builds for a historic second impeachment effort in his final 10 days in the White House. Photo: VCG

Who is the threat to the US national security? We have heard too many times the US yells over alleged external threats, especially from China and Russia. However, the chaotic Capitol riots on January 6 have given scholars of international relations new food for thought.

In an article published on the Australian edition of the Conversation on Tuesday, Sadia Mariam Malik, a scholar of York University, wrote that internal conflicts and civil unrest of the type we saw in the US Capitol “have replaced external military aggression as the major source of threats to human lives and state stability.” The US might as well heed the warning.

The Capitol riots have detonated unprecedented US political and social chaos like a spark falling into an oil barrel. Although the turmoil that dragged the country into its darkest moment was quelled, the FBI is warning that it has received information of “armed protests” in all 50 state capitols and Washington DC next week during the presidential transition, according to an internal bulletin obtained by CNN Tuesday.

The Capitol raid, the anti-racism protests that swept the US in 2020, and the fast-growing and uncontrolled epidemic are enough to prove that the US is decaying, and desperately sick. The US, riddled with deep contradictions, is now being plagued by continuous internal crises. It’s fair to say the internal division in the country has reached the level where it’s hard to bridge. Political and social polarization has produced hatred, high risks of violence and riots. Civil unrest could be sparked at any moment.

Will American society be healed or continue to be torn apart? Will the US see more turbulence or maintain its stability? If the US still can’t figure out the real threat to its national security, and fails to recognize that the biggest enemy of the US is itself, the prospects of the country will be even bleaker.

Why has the US been mired in such serious internal crises? One of the reasons is that, for a long time, Washington has shown little interest in addressing domestic problems, but been more enthusiastic about shaping ideological enemies, engaging in geopolitical competition and inciting major power confrontations. The 2017 US National Security Strategy listed “inter-state strategic competition” as a major national security concern.

The US packages itself as a “firm” defender of national security and interests by hyping the “China threat” or “Russia threat.” For instance, US Director of National Intelligence John Ratcliffe in December 2020 labeled China as “national security threat No.1,” accusing China of posing the greatest threat to America today, as well as to democracy and freedom worldwide since World War II. US president-elect Joe Biden named Russia as Washington’s most serious global threat during his election campaign.

The US since the Cold War has been the only superpower in the world. No matter how hard it tries to portray alleged foreign enemies, no external forces can cause such a big country to collapse.

But can shaping alleged foreign enemies really bring American unity? Should the US have devoted more resources and energy to resolving its domestic contradictions, getting rid of the ideological prejudice and a sense of superiority over its political system, and focusing more on major power cooperation rather than rivalry, it may have faced a different domestic situation now.

The only factor that can cripple the country is its internal crises. The domestic quagmire the US is facing shows the country’s biggest enemy is itself. The question is: Who has the guts to speak this out in the US?