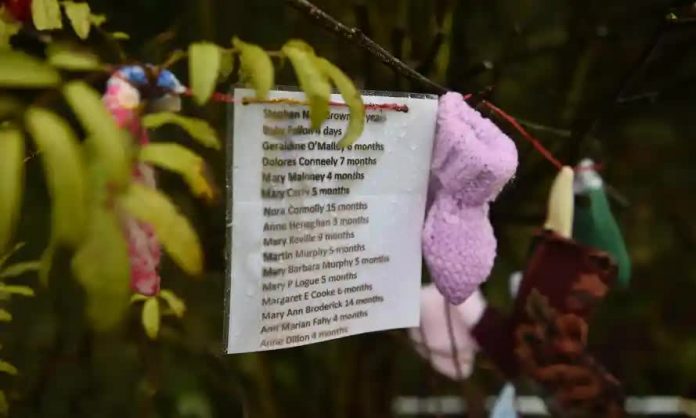 A burial shrine with the names of babies who died at the Tuam maternity home in Galway. Almost 800 children died without burial records at the home. Photograph: Charles McQuillan/Getty Images

The Irish state and Ireland’s Catholic church have made landmark apologies for running and enabling a network of religious institutions that abused and shamed unmarried mothers and their children for much of the 20th century.

The taoiseach, Micheál Martin, led government figures on Wednesday in accepting responsibility and expressing remorse for mother-and-baby homes that turned generations of vulnerable women and infants into outcasts.

Eamon Martin, the Catholic primate of all Ireland, led statements from bishops and nuns that apologised for the central role of the church in a dark chapter of Irish history.

The apologies followed publication on Tuesday of a long-awaited report by a judicial commission of investigation, which documented harrowing abuse, neglect and callousness in institutions that served as dumping grounds for unmarried mothers and their children.

Some survivors and opposition politicians said the report did not go far enough to establish criminal culpability by the state and church, and called for church assets to be seized unless the institution contributed to a state-run redress scheme.

The taoiseach told the Dáil he accepted that the state bore much responsibility.

“For the women and children who were treated so cruelly we must do what we can, to show our deep remorse, understanding and support. And so, on behalf of the government, the state and its citizens, I apologise for the profound generational wrong visited upon Irish mothers and their children who ended up in a mother and baby home or a county home.”

About 56,000 women and 57,000 children were placed or born at the homes, most run by nuns, from 1922 until the last one shut in 1998. Families brought the women to the homes, which doubled as orphanages and adoption agencies, to hide what was deemed the shame of pregnancy and birth out of wedlock.

The report found no evidence of sexual abuse and little evidence of physical abuse – a version challenged by some survivors – but documented cruelty, intolerance, neglect and an “appalling” infant mortality rate at about double the national average.

“We honoured piety, but failed to show even basic kindness to those who needed it most,” said the taoiseach.

The report of 2,865 pages compiled over five years had given survivors a voice, he said. “Former residents talk of a feeling of shame for the situation they found themselves in. The shame was not theirs – it was ours,” he said.

He said: “I accept that the church was clearly part of that culture in which people were frequently stigmatised, judged and rejected. For that, and for the long lasting hurt and emotional distress that has resulted, I unreservedly apologise.”

The investigation was prompted by the revelation that there were no burial records for almost 800 children who died at a mother and baby home in Tuam, County Galway. Excavations subsequently found significant quantities of human remains in a disused septic tank.

The Sisters of Bon Secours religious order, which ran the home, apologised. “We acknowledge in particular that infants and children who died at the home were buried in a disrespectful and unacceptable way. For all that, we are deeply sorry.”

Catherine Corless, a historian who helped uncover the Tuam scandal, welcomed the apology and urged the nuns to let the human remains be exhumed and DNA tested.