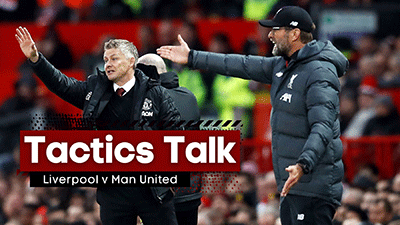 Manchester United are top of the Premier League table in January for the first time since Sir Alex Ferguson’s retirement. Symbolically that is a huge moment for the club, and in this uniquely exhausting season we should not downplay the psychological side of the sport.

Ole Gunnar Solskjaer’s greatest asset as a manager has always been his man-management, and with this new confidence boost his players could find the motivation to keep this run of form going right through until May.

One thing is for sure: they cannot afford to drop their levels by much, not with Manchester City rapidly improving and Liverpool highly likely to get out of their slump sooner rather than later.

Momentum is everything, then, and for an emotionally volatile club like the Red Devils the symbolism of the moment is vital. Consequently, Sunday’s north-west derby is worthy of the hype. A win for Manchester United could well signify the beginning of a renaissance for the club.

Here’s how they can beat Liverpool.

A conservative shape and surrounding Thiago

The best template to follow among Liverpool’s string of poor results is Southampton’s. Ralph Hasenhuttl combined some targeted pressing, a deep off-the-ball shape, and quick long-ball counter-attacks to poke numerous holes in Jurgen Klopp’s team; it was a richly deserved and highly tactical victory, hence the outpouring of emotion from the Saints manager at the final whistle.

The first lesson, and one United could also learn from West Bromwich Albion and Newcastle, is to hold a relatively deep shape overall with focus on surrounding Liverpool’s deep-lying playmaker.

Solskjaer’s players should sit off the hosts’ centre-backs and instead form a compressed ring around Thiago, with two players (the striker and Bruno Fernandes) shuffling around in front of the Liverpool midfielder while a bank of four sit just behind him.

This generally suffocates Liverpool, who cannot pass through the compact shape or get their metronome on the ball, leading to simple and low-tempo passes out to the flanks.

Once the ball is with the full-backs, United need to engage the press to cause further disruption. This is how Southampton prevented Liverpool from building momentum or creating chances. Solskjaer should –and almost certainly will – follow suit.

Long balls in behind to disrupt makeshift centre-backs

The second Saints method is less common. Hasenhuttl instructed his players to constantly seek the long-ball option over the top of Liverpool’s high defensive line, often playing this pass completely blind in order to catch Klopp’s side off guard and get Danny Ings in behind. The move was so frequent, and so urgent, Southampton even managed to do it from a set-piece in the first couple of minutes of the game, leading to Ings’ winner.

United must be focused enough to play patiently without the ball and urgently with it. Paul Pogba and the United back four should look to hit long passes in behind Liverpool whenever possible, with Anthony Martial and Marcus Rashford, in particular, alert enough to make constant runs.

This is a method that Liverpool have often been vulnerable against, but considerably more so since an injury crisis hit their defence, with recognised midfielders Fabinho and even Jordan Henderson forced to fill in at the back this term.

Aside from moments when United are able to go over the top, their main form of attack needs to be sharp, incisive football built through the inside channels. It is here that Liverpool’s 4-3-3 is most vulnerable, because as the front three stay high, space tends to appear on the outside of the three central midfielders; teams who use narrow wingers get more time on the ball against Klopp’s team.

Trent Alexander-Arnold had a poor performance against Southampton and should be targeted via direct dribbling from Martial or Rashford, while the movement of Fernandes and line-breaking dribbles of Pogba can help unsettle a slow Liverpool midfield. Between them, they need to play with a verticality and assertiveness that creates counter-attacking-style patterns at all times.

If they can do this then Liverpool will be pushed back for periods, at which point Edinson Cavani’s expert movement in the box can exploit the problem with playing central midfielders as centre-backs.

Defend deeper as the game wears on

Unless they’re chasing a goal, for the final 20-30 minutes Manchester United will need to dig in. The high-energy strategy of playing longer passes over the top or looking to cut through on the outside of the Liverpool midfielders will be too exhausting to maintain for a full 90 minutes at Anfield, and so Solskjaer will need a second phase of the approach.

Klopp’s team are in a poor run of form, and as confidence wanes their front three are looking increasingly disconnected. That calls for doubling down on the defensive side of United’s game; as Newcastle, West Brom, Southampton (towards the end), and Fulham all showed, an ultra-deep blockade of bodies can force Liverpool into aimless and weary sideways passing.

United need to feel comfortable with falling back into this formation towards the end of the match if they are to pull off a shock result.

Liverpool haven’t lost a Premier League game at Anfield since April 2017. With momentum swinging firmly in United’s direction, and with Liverpool in the midst of poor form and an injury crisis, the visitors could not have asked for a better opportunity to make an enormous symbolic statement; to give the impression of a seismic transfer of power.

They have a blueprint to follow and the right personnel to pull it off. Sunday could be one of the biggest north-west derbies in Premier League history.