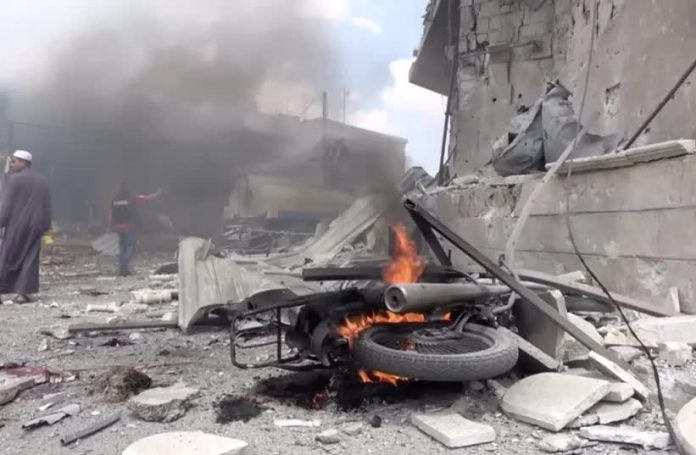 The strikes come as the Trump administration is wrapping up its era.

A motorbike burns after an airstrike in this screen grab taken from a social media video said to be taken in Idlib, Syria on July 16, 2019
(photo credit: WHITE HELMETS/SOCIAL MEDIA VIA REUTERS)
Large airstrikes in Syria overnight Tuesday shook the ground in the Iraqi-border city of Albukamal and the city of Deir al-Zor 120 km. to the northwest. Both cities are on the Euphrates River and are part of the network of Iranian bases and influence in Syria.

These airstrikes were different than most others reported in the past year: They eviscerated a warehouse, a military headquarters and other sites. Two dozen people were reported killed, including Syrian soldiers and members of Iranian-backed groups.

What do we know? A warehouse near Deir al-Zor in a place called Ayyash was photographed after its apparent destruction. A military security headquarters housed in what looked like a 1970s-era dilapidated building in Deir al-Zor was ripped apart. Several white caravans were damaged near Albukamal. Aurora Intel and other online sleuths have geo-located many of the sites. The caravans were part of an “informal” crossing into Iraq, one likely used by Iran.

In the past, these areas have been guarded by Kataib Hezbollah. In 2018, an airstrike destroyed an area that was run by this pro-Iranian group. We know about Kataib Hezbollah’s role in Iran’s trafficking because it was run by Abu Mahdi al-Muhandis, the deputy of the Popular Mobilization Units or Hashd al-Shaabi, a group of mostly Shi’ite militias in Iraq that receives a salary from the state.

Muhandis was close to Qasem Soleimani, and they were both close to Imad Mughniyeh and Hassan Nasrallah of Hezbollah. Soleimani and Muhandis were killed by the US a year ago, and Mughniyeh was killed in Damascus years ago.

Iran began building what is called the Imam Ali base near Albukamal in 2018. It became festooned with tunnels, buildings and warehouses between 2019 and 2020. This area has been struck numerous times, with Syria blaming Israel for some airstrikes.

The Jewish state has carried out more than 1,000 airstrikes on Iranian positions in Syria over the last five years. Those are the publicly known strikes; it is not known who carried out the strike on the night of January 12. The Syrian Observatory for Human Rights pointed at Israel as having carried out the 18 strikes that occurred around 1 a.m. on January 13.

The strikes come as the Trump administration is wrapping up. There has been increased activity at the Imam Ali base, which is more like a sprawling desert area. It links to a road that runs through waypoints called T-1, T-2 and T-3, and then T-4, an air base near Palmyra.

That base houses Iran’s elite Islamic Revolutionary Guard Corps units and has been used to fly drones toward Israeli airspace. One drone penetrated into Israeli airspace and was shot down in February 2018. The Syrian regime reconquered areas near the Golan that summer, and Iran, along with its Hezbollah ally, has festooned areas near Quneitra and Deraa with safe houses and units.

What was hit on the night of January 12? Pro-Iranian IRGC groups called Fatemiyoun, often recruited from Pakistan and Afghan Shi’ites, were allegedly struck. They run a network of posts from Albukamal to al-Mayadin and Deir al-Zor. Although they are poor fighters who receive small wages from Iran, they have vowed in the past to strike at Israel, as part of Iran’s network of militias, which is sometimes called the Iranian “road to the sea.”

The airstrikes caught the Syrian regime soldiers by surprise last night, and they mobilized after the attacks. They have also been suffering from attacks by ISIS in the desert.

Syria’s regime army is weak, poor and barely has enough food to eat and medications at many of its posts. Damascus has seen infighting between units, such as Druze and members of a Russian-backed corps near Deraa.

The regime army has been at war for 10 years and has been decimated fighting rebels and others. Iran has sponged up resources and entered these areas of Syria to displace the Syrians and the regime army and use the war-torn country as a launchpad for regional ambitions.

Tehran acts like an octopus and a sponge: dissolving, eating, occupying and eating up areas, and then replacing what was there by copycat militias that look like the IRGC in Iran but go by other names and act like a cross between a mafia and a religious, zealous crusading culture.

The only thing in Iran’s favor in this respect is that its militias’ leaders are generally modest and have a kind of vow of poverty, living close to their fighters and not adorning their chests with medals or driving sports cars. For this reason, Iran’s occupation appears light-handed, even as it spreads.

Israel has vowed to stop Iranian entrenchment in Syria. The size of the airstrikes would appear to indicate that Iran is still there.

It’s unclear what the point was of hitting the warehouses, where Fatemiyoun allegedly distributes small arms. It is also unclear whether those on the ground were fully informed about what was in the warehouses and sites struck with missiles.

The high death toll is unusual for these kinds of precision strikes. June 2020 airstrikes in Syria struck an area known as “Radar Dish Hill” in the south, also near Palmyra, which was one of the most recent complex airstrikes resembling the strike launched on January 12.